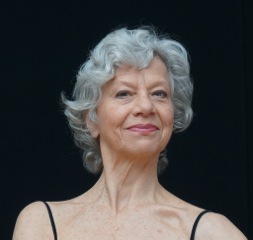 Martine van Hamel, whose father, before his retirement, was a Dutch diplomat, was born in Brussels.  She studied dance in Denmark, Holland, and Venezuela before settling down at the National Ballet School of Canada.  In l966, van Hamel was awarded the Gold Medal at the International Ballet Competition held in Varna, Bulgaria, and, at the same time, won the seldom‑awarded Prix de Varna for best artistic interpretation in all categories.  She was a principal dancer with the National Ballet of Canada and danced most of the major ballerina roles while with that company.  She subsequently became a member of the City Center Joffrey Ballet before joining American Ballet Theatre in 1970.  At American Ballet Theatre, van Hamel was promoted to the rank of Soloist in 1971, and in 1973, became a Principal Dancer after a highly‑acclaimed New York debut as Odette‑Odile in Swan Lake.

Van Hamel has also danced at In the American Grain, a June 1989 gala for ABT and the Martha Graham Company, in the role of the Pioneering Woman in Graham’s Appalachian Spring. She choreographed her first ballet for ABT, Amnon V’Tamar, which had its World Premiere in Miami in January 1984.

In June 1990, van Hamel celebrated 20 years with ABT, dancing the leading role in Swan Lake. From 1992 until 1998, she danced with Jiří Kylián’s Netherlands Dans Theater III. During that time she danced ballets by choreographers Jiří Kylián, Maguy Marin, William Forsythe, Hans van Maanen, Martha Clarke and Mats Ekk. She also continued to choreograph works for The Washington Ballet, Milwaukee Ballet and The Royal Winnipeg Ballet.

Van Hamel was the recipient of the Cue Magazine Award for outstanding dancer in 1976, the 1983 Dance Magazine Award, honoring her dedication to, and enrichment of, the art of dance, the Dance Education of America’s Award in July 1989, and the 1992 Award for Excellence from Washington College. She is Co-Founder of the Kaatsbaan International Dance Center dedicated to the growth, advancement and preservation of professional dance. She also directs “Extreme Ballet” for ballet students in the summer, and is the current artistic director of her own company, the New Amsterdam Ballet. As artistic director, van Hamel engages artists in an imaginative and challenging repertoire, with works by both world-renowned and new choreographers.

She still performs on occasion in character roles with ABT and in recent works created for her by AnneMarie DeAngelo and Wendy Perron. Van Hamel has also enjoyed singing with The New York Choral Society since 1999. She has taught for The Juilliard School and the American Ballet Theatre Jacqueline Kennedy Onassis School since its inception.