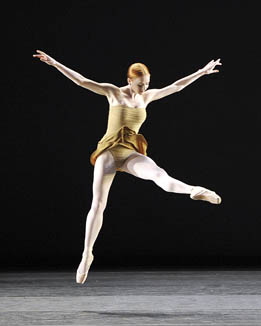 Gillian Murphy in The Brahms-Haydn Variations.

American Ballet Theatre’s 2015 Fall season at the David H. Koch Theater opens Wednesday, October 21 with the annual opening night Gala at 6:30 P.M. Sponsored by JPMorgan Chase & Co., the evening will feature the New York City Premiere of After You by choreographer Mark Morris, the Company Premiere of Frederick Ashton’s Monotones I and II and the Revival Premiere of Twyla Tharp’s The Brahms-Haydn Variations.

Sarah Arison, Melissa A. Smith, Sutton Stracke, Monica G-S Wambold and Leslie Ziff will serve as Gala Co-Chairs. Toni and Martin Sosnoff will be honored with The Melville Straus Leadership Achievement Award. Dinner and dancing will immediately follow the performance on The Promenade at the David H. Koch Theater. Proceeds from the 75th Anniversary Fall Gala will support ABT’s education and community outreach programs.

After You has been generously supported through an endowed gift from The Toni and Martin Sosnoff New Works Fund.

The Brahms-Haydn Variations has been made possible by the generous support of Patsy and Jeff Tarr, the JCT Foundation and the 2wice Arts Foundation. Additional support provided by Michele and Steve Pesner.