Four works by ABT Artist in Residence Alexei Ratmansky; including a World Premiere created in a “ballet bubble” 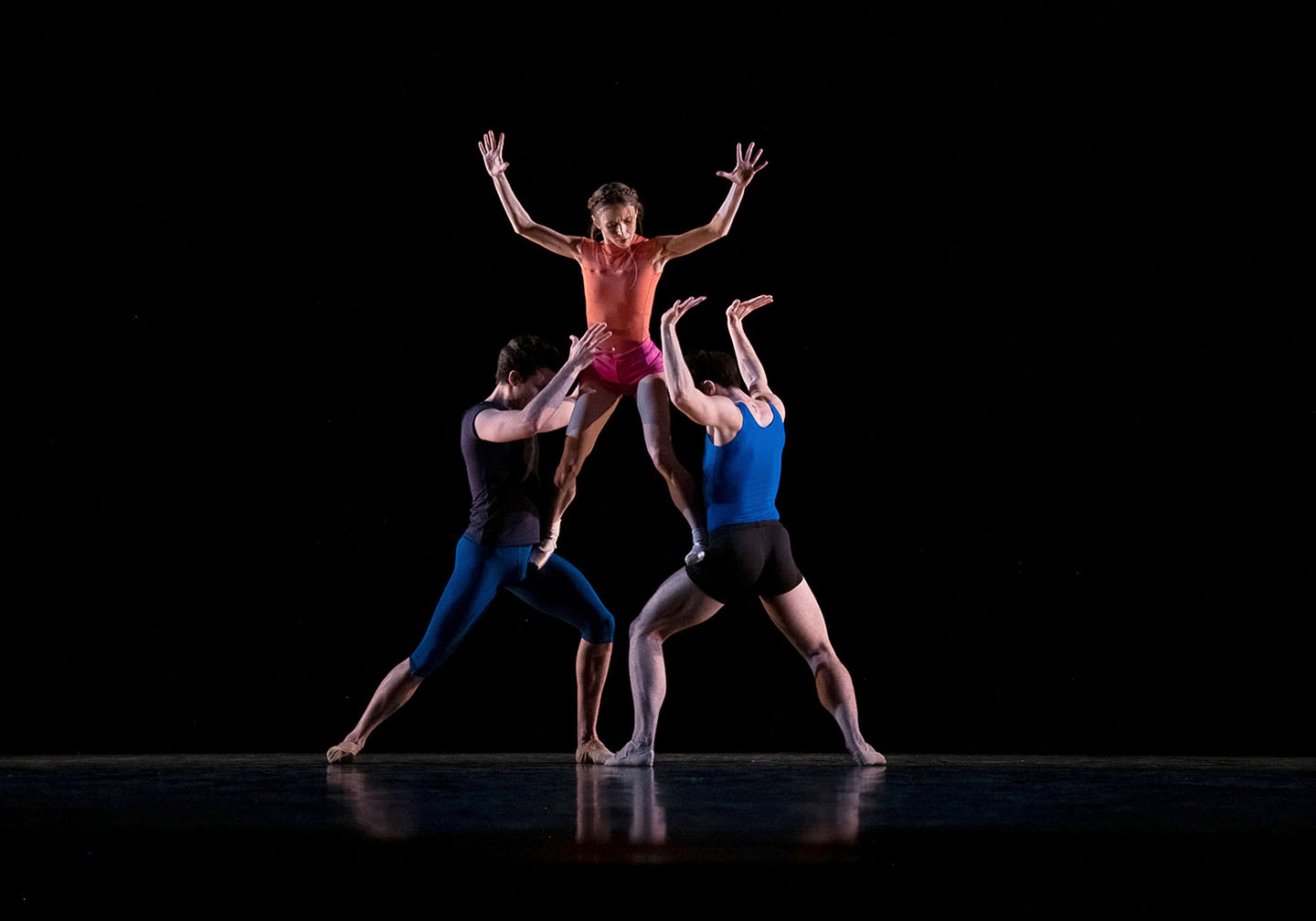 Co-presented by American Ballet Theatre and New York City Center, the program will feature many of the company’s renowned dancers in works by acclaimed choreographer and ABT Artist in Residence Alexei Ratmansky. Hosted by author and American Ballet Theatre Co-Chair of the Trustees Emeriti Susan Fales-Hill, highlights include excerpts from The Seasons (2019), Seven Sonatas (2009), and The Sleeping Beauty (2015), and Bernstein in a Bubble, a World Premiere set to the music of legendary composer Leonard Bernstein. The new work, Ratmansky’s first since March 2020, was created in January and February of this year during a quarantined “ballet bubble” in Silver Bay, New York. The program features ABT dancers Aran Bell, Isabella Boylston, Skylar Brandt, Herman Cornejo, Patrick Frenette, Carlos Gonzalez, Blaine Hoven, Catherine Hurlin, Tyler Maloney, Luciana Paris, Devon Teuscher, Cassandra Trenary, and James Whiteside.

The program will also feature a special intermission conversation with Ratmansky and the curator of the Jerome Robbins Dance Division at the New York Public Library, Linda Murray. Together, they discuss the program’s four pieces, including Ratmansky’s approach to choreographing in a bubble.

“City Center has been a valuable creative home to ABT throughout the company’s history—hosting them first in the 1940s, shortly after both institutions were founded,” said Arlene Shuler, New York City Center President and CEO. “We’re delighted to be presenting the company as part of our digital season of great artists and companies performing back on our stage.”

“We’re so pleased to return to this beloved stage at City Center and to do so with a program that celebrates the artistic imagination and range of Alexei Ratmansky,” said Kevin McKenzie, ABT Artistic Director. “The program reflects ABT’s mission of preserving the classics—as exemplified by Alexei’s re-staging of Petipa’s The Sleeping Beauty—and extending the repertoire with his newest work, Bernstein in a Bubble. This digital presentation allows us to reach an even wider audience.”

American Ballet Theatre’s relationship with New York City Center began in 1947, headlined by the world premiere of George Balanchine’s masterpiece Theme and Variations, created for Ballet Theatre luminaries Alicia Alonso and Igor Youskevitch. Over its 81-year history, ABT’s performances at City Center have featured more than 30 World Premieres, 30 Company Premieres, and seven major revivals created by leading choreographers of the 20th and 21st centuries, including Agnes de Mille, William Forsythe, Jiří Kylián, Lar Lubovitch, Kenneth MacMillan, Alexei Ratmansky, Jerome Robbins, Twyla Tharp, Antony Tudor, and Christopher Wheeldon. In 1997, after an absence of more than two decades, ABT returned to City Center for regular fall seasons through 2012. ABT’s City Center engagements came to be known as a place to see new choreography and established repertoire in an intimate setting. The Company performed in City Center’s first Fall for Dance Festival in 2004 and has been a proud participant throughout the festival’s celebrated history. Most recently, ABT appeared in Balanchine: The City Center Years as part of City Center’s 75th Anniversary Season 2018-2019.

Digital access for ABT Live from City Center starts at $25 and goes on sale at noon on March 1, online at NYCityCenter.org. The program premieres on Tuesday, March 23 at 7 PM ET and will be available on demand through Sunday, April 18.

“Rose Adagio” from The Sleeping Beauty

Originally choreographed by Marius Petipa, The Sleeping Beauty received its world premiere by the Imperial Ballet at the Mariinsky Theatre in St. Petersburg on January 15, 1890. ABT’s present production was reconstructed from the notations of Petipa’s original choreography by ABT’s Artist in Residence Alexei Ratmansky. With steps and style reflecting the original 19th century production, Ratmansky brought the iconic classic to life for modern audiences.

Seven Sonatas was the second ballet that Ratmansky choreographed as Artist in Residence with ABT. Created in 2009 and set to piano sonatas by Domenico Scarlatti, the work presents six dancers in various solos, pas de deux, and group sections. In the second movement of the ballet, four of the dancers follow each other in a series of solos that demonstrate Ratmansky’s distinctive compositional style and innate musicality.

In 2019, as a gift to ABT on the occasion of his tenth anniversary with the company, Ratmansky created The Seasons to the rich and romantic ballet score by Alexander Glazunov.  The main pas de deux, danced to the Petit Adagio from the Autumn Section of the music, is a tender duet towards the end of the ballet that unfolds with the warmth and ease of a late summer day.

Four years after the success of his first work to Leonard Bernstein’s iconic music, the critically acclaimed Serenade after Plato’s Symposium, Ratmansky’s new work explores the artistic personas of ABT’s world-class dancers. Inspired by the variety, charm, and quintessentially American spirit of Bernstein’s Divertimento, this piece—choreographed in a quarantined bubble residency in upstate New York—is an exciting reflection of artistic creativity in these challenging times.

American Ballet Theatre launched The Ratmansky Project in 2016 to foster the artistry of Artist in Residence Alexei Ratmansky and his creation of new works for the Company. We are grateful to the following donors for their commitment to this endeavor.

ABT gratefully acknowledges the Lead Sponsor of The Sleeping Beauty, David H. Koch† with additional leadership support provided by the Lloyd E. Rigler – Lawrence E. Deutsch Foundation. Linda Allard is recognized for her generous gift toward the costumes for The Sleeping Beauty.  Special thanks to Avery and Andrew F. Barth, The Susan and Leonard Feinstein Foundation, Caroline and Edward Hyman, Howard S. Paley†, Linda and Martin Fell, Mr. and Mrs. Austin T. Fragomen, The Ted and Mary Jo Shen Charitable Gift Fund, Michael and Sue Steinberg for their major gifts.

The Sleeping Beauty and Seven Sonatas are generously supported through an endowed gift from The Toni and Martin Sosnoff New Works Fund. Additional support for Seven Sonatas was provided by Leila and Mickey Straus.

Champion support for the ABT Women’s Movement is provided by Jenna Segal. Special thanks to Denise Littlefield Sobel for her leadership gifts to: ABT’s Media Fund, advancing the Company’s digital endeavors; and ABT RISE, fueling the Company’s commitment to diversity, equity, and inclusion.

Bank of America — Lead Corporate Partner of ABT Studio Company

American Airlines is the Official Airline of American Ballet Theatre

AMERICAN BALLET THEATRE is one of the great dance companies in the world. Few ballet companies equal ABT for its combination of size, scope, and outreach. Recognized as a living national treasure since its founding in 1940, ABT annually tours the United States, performing for more than 300,000 people, and is the only major cultural institution to do so. For 81 years, the Company has appeared in a total of 45 countries and has performed in all 50 states of the United States. ABT has recently enjoyed triumphant successes with engagements in Paris, Singapore, and Hong Kong. On April 27, 2006, by an act of Congress, American Ballet Theatre became America’s National Ballet Company®.

NEW YORK CITY CENTER (Arlene Shuler, President & CEO) has played a defining role in the cultural life of the city since 1943. The distinctive neo-Moorish theater welcomes over 300,000 annual visitors to experience internationally acclaimed artists on the same stage where legends like George Balanchine, Leonard Bernstein, and Barbara Cook made their mark. Its landmark 75th Anniversary Season (2018 – 2019) paid tribute to this rich history and celebrated the institution’s singular role in the arts today. City Center’s Tony-honored Encores! series has celebrated the tradition of American musical theater for over 25 years. In 2013, City Center launched the Encores! Off-Center series, which brings today’s innovative artists into contact with groundbreaking musicals from the more recent past. Dance has also been integral to the theater’s mission from the start and programs like the annual Fall for Dance Festival, with all tickets $15, remain central to City Center’s identity. Home to a roster of renowned national and international companies including Alvin Ailey American Dance Theater (City Center’s Principal Dance Company) and Manhattan Theatre Club, New York City Center is Manhattan’s first performing arts center, founded by Mayor Fiorello La Guardia with the mission of making the best in music, theater, and dance accessible to all audiences. That mission continues today through its dynamic programming, art exhibitions, studio events, and master classes, which are complemented by education and community engagement programs that bring the performing arts to over 11,000 New York City students, teachers, and families each year. NYCityCenter.org