In 2015, Alexei Ratmansky brought to life Marius Petipa and Peter Ilyitch Tchaikovsky’s timeless masterpiece The Sleeping Beauty. We kick off The Sleeping Beauty week with ABT corps de ballet dancer Marshall Whiteley attempting the “15-Second Beauty Challenge.”   Do you think he can successfully tell the story of a three-hour ballet in 15 seconds?

Join one of ABT’s Teaching Artists as they introduce you to one of ABT’s fabulous ballets. Learn a dance, stop and sketch, and don’t forget to have fun!

Up this week: Ms. Alexis!

Today we celebrate National Fudge Day by sharing ABT Teaching Artist Karen Lacy’s World Famous Fudge recipe! Ms. Karen is known for bringing joy and delicious treats for her fellow Teaching Artists while working in schools across the country!

The Act III wedding between Princess Aurora and Prince Désiré is one of classical ballet’s most memorable and iconic moments. Attending the wedding are characters from other fairy tales, such as Cinderella, Little Red Riding Hood, The Wolf and Puss-in-Boots. Many of these characters wear large costumes with big masks to bring them to life. Today we are going to meet Alexei Agoudine (Puss-in-Boots) and Marshall Whiteley (The Wolf) who will share the many challenges of dancing while under the mask!

Every Thursday we pull a photo from our archives and share it with one of our ABT dancers. You never know what stories may come from a single snapshot!

Melvin Lawovi
ABT Apprentice
Joined ABT in 2019

“This photo brings back so many memories for me! It was taken not long ago, after I joined ABT Studio Company and moved to New York City from France. I am dancing the role of Albrecht in the ballet Giselle with my amazing partner (also French) Léa Fleytoux.

Giselle is one of the classics in the ballet repertoire and my personal favorite. It felt surreal to get to dance this role only few weeks after I joined the Studio Company. The version that we danced was choreographed by Ethan Stiefel and Johan Kobborg, and it was amazing to get to learn everything right away from Ethan and get all the tips and tricks for this particular version.

Léa helped me a lot, since she had already rehearsed it before and knew the part really well. It was pretty interesting to get to know her more and collaborate to make the story come to life. Also, it was super helpful to speak the same language, as we were exactly on the same page.

I remember being really stressed before this performance because it was my very first time on stage with the Studio Company. It was a big deal for me, but once the lights went up and the music started everything just went smoothly. I was really happy with my performance afterwards. This pas de deux helped me to grow as an artist and taught me patience and how to work with my partner. It takes two of us to make this piece come alive, so it’s really important to listen to each other.

Tip for the boys out there: Always know your choreography as well as the woman’s choreography when you do any type of partnering!

Fun Fact #1: I’m wearing Principal Dancer David Hallberg’s costume, and I always admired him. He is an awesome dancer and one that I took inspiration from as I worked on the role of Albrecht. Almost a year after this performance, I was the recipient of his scholarship, which was surreal to me as I got to see some of his private rehearsals and got to learn more about him and his career!

Fun Fact #2: Giselle was also my grandmother’s name and before every single show, I used to think about her before entering the stage!”

Write about a time that you got to meet something whom you greatly admired.

In The Sleeping Beauty, The Lilac Fairy protects Princess Aurora from the curse of the evil fairy Carabosse. She changes the curse into a spell that makes the young Princess fall into a deep sleep that will last for one hundred years.

Time is a very important element in the ballet and today you are going to explore time by creating your very own time capsule!

What is a Time Capsule?

A time capsule is a container filled with items that signify aspects of your life, your values and your memories, to remember for years to come. You seal this container and put it aside for a given period of time. When you reopen the container, it reminds you of your past, helping you reminisce and reflect on what was once important.

What do you put in a Time Capsule?

You want to include items or memories you cherish in the present.
Examples:

Time Capsules around the World and Beyond!

Did you know that America’s oldest time capsule was made by Samuel Adams and Paul Revere (1795-2015)?

Did you know that Sleeping Beauty’s Castle at Disneyland became a “Time Castle” in 1995 to celebrate the theme park’s 40th Anniversary?

Did you know that in 1977 NASA sent a time capsule into space on the Voyager in the form of Golden Records to share our stories of Earth with aliens?

Ready to create your own time capsule? 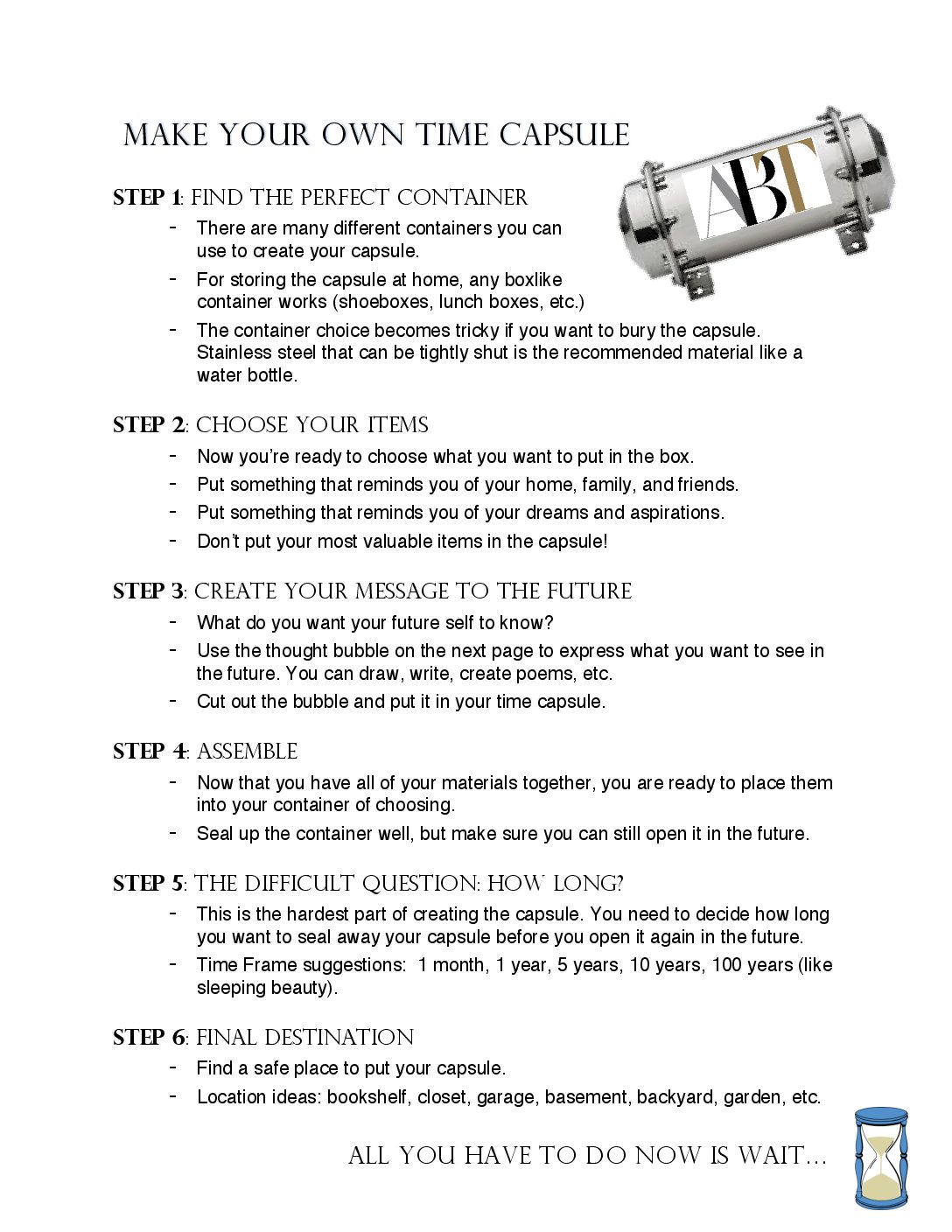 These classes engaged, recommended for ages 2-4 and 5-8, by explore musicality, foster creativity and imagination, and teach ballet fundamentals. These classes engage ABT’s youngest students and their families, as well as the global community at large!