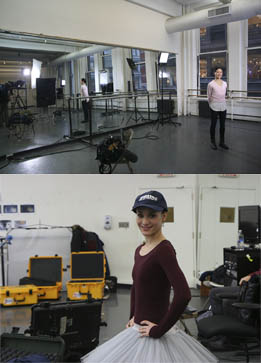 Hee Seo (top) and Sarah Lane on set at JEOPARDY!'s ABT shoot in February.

American Ballet Theatre’s 75th Anniversary will be the subject of a category on the television quiz show JEOPARDY! on Tuesday, May 5, 2015.  The featured ABT category will include performance footage from several of the upcoming Spring season’s iconic ballets, with clues read by ABT dancers.

JEOPARDY!, America’s Favorite Quiz Show® and its host, Alex Trebek, are celebrating their 31st season. The top-ranked quiz show, with 25 million viewers each week, JEOPARDY! holds the Guinness World Records® title for the most Emmy® Awards won by a TV game show (32 Emmys), including the 2015 Emmy® for Outstanding Game Show.  JEOPARDY! is produced by Sony Pictures Television, a Sony Pictures Entertainment Company; it is distributed domestically by CBS Television Distribution and internationally by CBS Television International, both units of CBS Corp. For more information, please visit Jeopardy.com.