Led by John Michael Schert, former ABT dancer and social entrepreneur, and featuring ABT artist-athletes, the ABT Leadership Lab uses the choreographic process to inspire an organization’s leaders to integrate creative thinking into the work culture.

In each 60-90 minute, interactive, customized workshop, we demystify creativity and innovation for individuals and teams by illustrating and embodying cutting edge leadership theories. 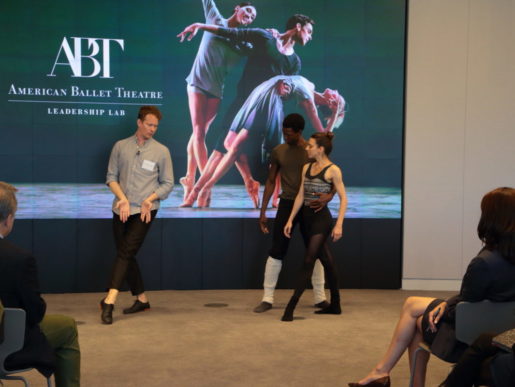 People skills are crucial and considered more than ever a priority for corporations.

Research shows that people skills account for 75% of job long term success and for 90% of the top 10 skills sought after in mid- to senior-level positions.

Like dancers, business leaders must apply these skills to:

About our Training Facilitator

John Michael Schert is an artist and producer working in multiple sectors and translating across many platforms. Originally from South Georgia, and now residing in Boise, Idaho, Schert began his career as a ballet dancer with American Ballet Theatre and Alonzo King LINES Ballet after attending high school at The University of North Carolina School of the Arts. In 2004 he co-founded Trey McIntyre Project (TMP), concurrently serving as the company’s Executive Director, and a dancer, for nine years. During this time, he gained a unique insight into the process and product of art-making and realized the ability to translate the creative process across different disciplines and domains. From October 2013 to January 2017 he served as the inaugural Visiting Artist and Social Entrepreneur at The University of Chicago Booth School of Business and Fall 2014 as an Associate Fellow with the NYU Center for Ballet and the Arts. Through these appointments he studied, and lectured on, the utility of the creative process and how the skills and behaviors of creatives can be of relevance and value to other sectors. As the founder and principal of JMS & Company, John Michael consults for clients such as The James S. and John L. Knight Foundation, The Boston Foundation, Chicago Booth, the City of Boston, and Soho House, as well as speaks in cities around the world. He is the executive producer of Boise’s B Corp certified Treefort Music Fest. John Michael is the founder of the American Ballet Theatre Leadership Lab which seeks to translate the incredible skills and creative processes of dance artists into valuable tools for the private sector.  Schert holds a Master in Public Administration from the Harvard University John F. Kennedy School of Government.


John Michael explains how principals from dance are relevant in business, while dancers rehearse.
Photo: Infor.


Luciana answers a question from an audience member.
Photo: Infor.

If you are interested in learning more or engaging the ABT Leadership Lab for your organization, please contact us.