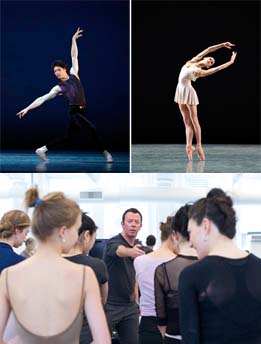 American Ballet Theatre Principal Dancers Herman Cornejo and Polina Semionova and Artist in Residence Alexei Ratmansky have each won the 2014 Benois de la Danse Prize.  The awards were announced at the Benois de la Danse ceremony and Charity Gala held on May 27 at the Bolshoi Theatre in Moscow.

Cornejo was recognized as best male dancer for his portrayals of Aminta in Sylvia, Caliban inThe Tempest and a leading role in Symphony #9, as well as for his appearance in Martha Clarke’s Chéri at Signature Theatre Company.  Semionova won best female dancer for her debuts in Theme and Variations, Symphony #9, Bach Partita and Les Sylphides.  Ratmansky was named best choreographer for the complete Shostakovich Trilogy (Symphony #9, Chamber Symphony and Piano Concerto #1) and The Tempest.

The Benois de la Danse Prize was established in 1992 by the International Dance Association (now the International Dance Union) and UNESCO.  The annual prize recognizes the achievements of the most outstanding choreographer, female dancer and male dancer of the previous year.  Nominees and awardees are selected by an international jury of dance luminaries including company directors, teachers and well-known artists in the world of ballet.

American Ballet Theatre’s Spring Season continues through July 5 at the Metropolitan Opera House. Tickets are available online, at the Met box office or by phone at 212-362-6000. For more information, visit ABT’s website at www.abt.org.