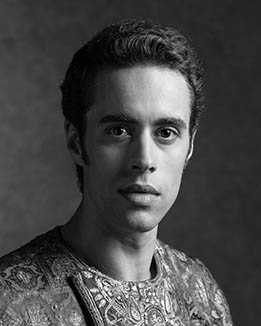 Mathias Heymann, an étoile with the Paris Opera Ballet, will debut as an Exchange Artist with American Ballet Theatre during the Company’s 2016 Spring season at the Metropolitan Opera House, it was announced today by Artistic Director Kevin McKenzie.  Heymann will perform the role of Conrad in Le Corsaire at the evening performance on Wednesday, June 1 and at the matinee on Saturday, June 4, opposite Gillian Murphy as Medora.

Heymann began his ballet training in his hometown of Marseille, France at the Académie Danse Attitude, under the direction of Véronique Sottile.  He entered the Paris Opera Ballet School in 2001 and joined the company’s corps de ballet in 2004, at age 17.  He was promoted to coryphée in 2006, to sujet in 2007 and to premier danseur in 2008.  Heymann was named étoile in April 2009.  His awards include the Prix du public/AROP and the Prix Carpeaux, both in 2006, and the Prix Benois de la Danse in 2012. He was named a Knight of France’s Order of Arts and Letters in 2014.

His repertoire with the Paris Opera Ballet includes Afternoon of a Faun, Solor and the Golden Idol in La Bayadère, Incitatus in Caligula, Autumn and the Dance Teacher in Cinderella, Franz in Coppélia, Basilio in Don Quixote, Baptiste in Les Enfants du Paradis, Colas and the Flute Dancer in La Fille mal gardée, Melancholic in The Four Temperaments, Albrecht and the peasant pas de deux in Giselle, Des Grieux in Lady of the Camellias, Drosselmeyer /the Prince in The Nutcracker, Lensky in Onegin, the pas de trois and Lucien d’Hervilly in Paquita, Mercutio in Romeo and Juliet, Rubies in Jewels, Prince Désiré in The Sleeping Beauty, Zaël in La Source, the Rose in Le Spectre de la Rose, Prince Siegfried in Swan Lake, James in La Sylphide and roles in The Anatomy of Sensation, Genus, In The Night, Kaguyahime, Manfred, Suite en Blanc, Symphony in C and Third Symphony of Gustav Mahler.