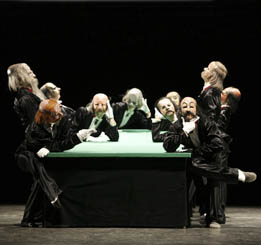 Scene from The Green Table.

American Ballet Theatre’s Opening Night Gala on Wednesday, October 21 at 6:30pm will feature a New York City Premiere by choreographer Mark Morris, the Company Premiere of Frederick Ashton’s Monotones I and II and the Revival Premiere of Twyla Tharp’s The Brahms-Haydn Variations.  Set to music by Johann Nepomuk Hummel (Septet in C Major, No. 2 “Military”), Morris’ new work for 12 dancers features costumes by Isaac Mizrahi and lighting by Michael Chybowski.  Morris’ new work will receive its World Premiere on October 9, 2015 at the Richard B. Fisher Center for the Performing Arts at Bard College, Annandale-on-Hudson, New York.  The new Morris work will be given six performances during ABT’s Koch Theater season.

Frederick Ashton’s Monotones I and II features music by Erik Satie and costumes by Ashton.  A one-act ballet in two parts, Monotones II was given its World Premiere on March 24, 1965 performed by Vyvyan Lorraine, Anthony Dowell and Robert Mead.  Ashton expanded the piece in 1966 with the World Premiere of Monotones I featuring Antoinette Sibley, Georgina Parkinson and Brian Shaw.  Monotones I and II, staged for ABT by Lynn Wallis, will be given five performances for the season.

A revival of Twyla Tharp’s The Brahms-Haydn Variations will round out the opening night Gala program.  Set to music by Johannes Brahms (Variations on a Theme by Haydn for Orchestra), the ballet for thirty dancers features costumes by Santo Loquasto and lighting by Jennifer Tipton.  The Brahms-Haydn Variations, which will have five performances during the Fall season, received its World Premiere by American Ballet Theatre on March 21, 2000 at the Kennedy Center for the Performing Arts, Washington, DC.  Staged for ABT by Susan Jones, the ballet was last performed by the Company in 2010.

George Balanchine’s Valse-Fantaisie will be given its Company Premiere on Friday evening, October 23.  Staged for ABT by Stacey Caddell, the ballet is set to Valse-Fantaisie in B minor by Mikhail Glinka. Valse-Fantaisie was given its World Premiere by New York City Ballet on January 6, 1953 performed by Diana Adams, Melissa Hayden, Tanaquil Le Clerq and Nicholas Magalanes.  The ballet will receive three performances during the Fall season.

The Company Premiere of AfterEffect by Principal Dancer Marcelo Gomes will be given on Wednesday evening, October 28.  Set to Peter Ilyitch Tchaikovsky’s Souvenir de Florence, Op 70, Gomes’ work features a set design by artist Françoise Gilot and costumes by Reid Bartelme and Harriet Jung.  Gomes’ work will consist of four movements, the first of which was premiered by American Ballet Theatre as Aftereffect on October 30, 2013 at the David H. Koch Theater.  The ballet will receive three performances during the Fall season.

Kurt Jooss’ The Green Table, a Dance of Death in Eight Scenes, last performed by American Ballet Theatre in 2007, will receive its Revival Premiere on Thursday evening, October 22.  Set to music by F.A. Cohen, The Green Table features costumes by Hein Heckroth, with masks by Hermann Markard and lighting by Brad Fields after the Jooss/Markard design. The ballet received its Company Premiere at City Center in New York City on October 21, 2005.  The Green Table was given its World Premiere by Jooss Ballet at the Théåtre de Champs-Élysées, Paris, France on July 3, 1932 with the choreographer in the role of Death.  Staged for ABT by Jeanette Vondersaar, The Green Table will be given six performances during the Fall season.

Le Spectre de la Rose was first presented by Diaghilev’s Ballets Russes at the Theatre de Monte Carlo on April 19, 1911 with Tamara Karsavina and Vaslav Nijinsky in the roles of the Young Girl and the Spirit of the Rose.  The ballet was given its United States premiere by the same company at the Metropolitan Opera House, New York on April 3, 1916, danced by Lydia Lopoukhova and Alexander Gavrilov. Twenty five years later, for the last time before his death, Fokine taught the roles to Ballet Theatre’s Annabelle Lyon and Ian Gibson and the Company presented it for the first time at the Palacio de Bellas Artes, Mexico City on October 31, 1941 with Lyon and Gibson in the leading roles.    It was given its New York Premiere at the 44th Street Theatre on December 4, 1941.  Le Spectre de la Rose, staged by Lyon and Andre Eglevsky, was given its American Ballet Theatre premiere at the Metropolitan Opera House, New York on July 7, 1972, danced by Carla Fracci and Paolo Bortoluzzi.  An excerpt of Le Spectre de la Rose was performed at a gala on May 12, 1997, danced by Vladimir Malakhov with Alicia Alonso.  Le Spectre de la Rose was previously revived in 2004 at New York’s City Center with Herman Cornejo and Xiomara Reyes in the leading roles.

American Ballet Theatre’s 2015 Fall season also includes three performances of Paul Taylor’s Company B and two performances of Alexei Ratmansky’s Piano Concerto #1.  Staged for ABT by Cathy McCann Buck, Company B is set to songs sung by the Andrews Sisters, with costumes by Santo Loquasto and lighting by Jennifer Tipton, recreated by Brad Fields.  The ballet was given its World Premiere by Houston Ballet in 1991 and received its ABT Premiere in 2008.

Piano Concerto #1, choreographed by Alexei Ratmansky and set to music by Dmitri Shostakovich (Concerto No. 1 for Piano, Trumpet and Strings, Op. 35), will be given two performances, Thursday evening, October 29 and Sunday matinee, November 1.  The ballet features scenery by George Tsypin, costumes by Keso Dekker and lighting by Jennifer Tipton.  Piano Concerto #1 was given its World Premiere by American Ballet Theatre on May 31, 2013 with Diana Vishneva, Cory Stearns, Natalia Osipova and Ivan Vasiliev in the leading roles.

Tickets for American Ballet Theatre’s 2015 Fall season at the David H. Koch Theater go on sale beginning July 20, 2015.   Tickets priced from $25 are available online, at the Koch Theater box office or by phone at 212-496-0600.  Performance-only tickets for the Opening Night Gala begin at $25.  The David H. Koch Theater is located at Lincoln Center, Broadway and 63rd Street in New York City.  For more information, visit ABT’s website at www.abt.org.

The Mark Morris Premiere has been generously supported through an endowed gift from The Toni and Martin Sosnoff New Works Fund.

The Company Premiere of AfterEffect has been generously underwritten by the Ted and Mary Jo Shen Charitable Gift Fund. Additional support provided by Lillian E. Kraemer. This production has been generously supported through an endowed gift from The Toni and Martin Sosnoff New Works Fund.

Valse-Fantaisie has been generously supported through an endowed gift from The Toni and Martin Sosnoff New Works Fund.

The Brahms-Haydn Variations has been made possible by the generous support of Patsy and Jeff Tarr and the JCT Foundation.  Additional support provided by Michele and Steve Pesner.

Company B has been generously supported by a gift from Marjorie S. Issac in honor of ABT Artistic Director Kevin McKenzie.

David H. Koch is the Lead Underwriter of Piano Concerto #1. Additional leadership support has been generously provided by The Susan and Leonard Feinstein Foundation. ABT gratefully acknowledges Linda Allard for her generous support of costumes for this production. Mary Jo and Ted Shen, Mrs. Marjorie S. Isaac, and an anonymous donor are Leading Sponsors of this production.  Additional support has been provided by Edward and Caroline Hyman, Charlotte and Macdonald Mathey, Michele and Steven Pesner, and Michael and Sue Steinberg.  This production has been generously supported through an endowed gift from the Toni and Martin Sosnoff New Works Fund.  This production has been made possible with public funds from the National Endowment for the Arts.