Pas de Deux to Premiere Thursday, October 29 at 7:00PM on YouTube and IGTV 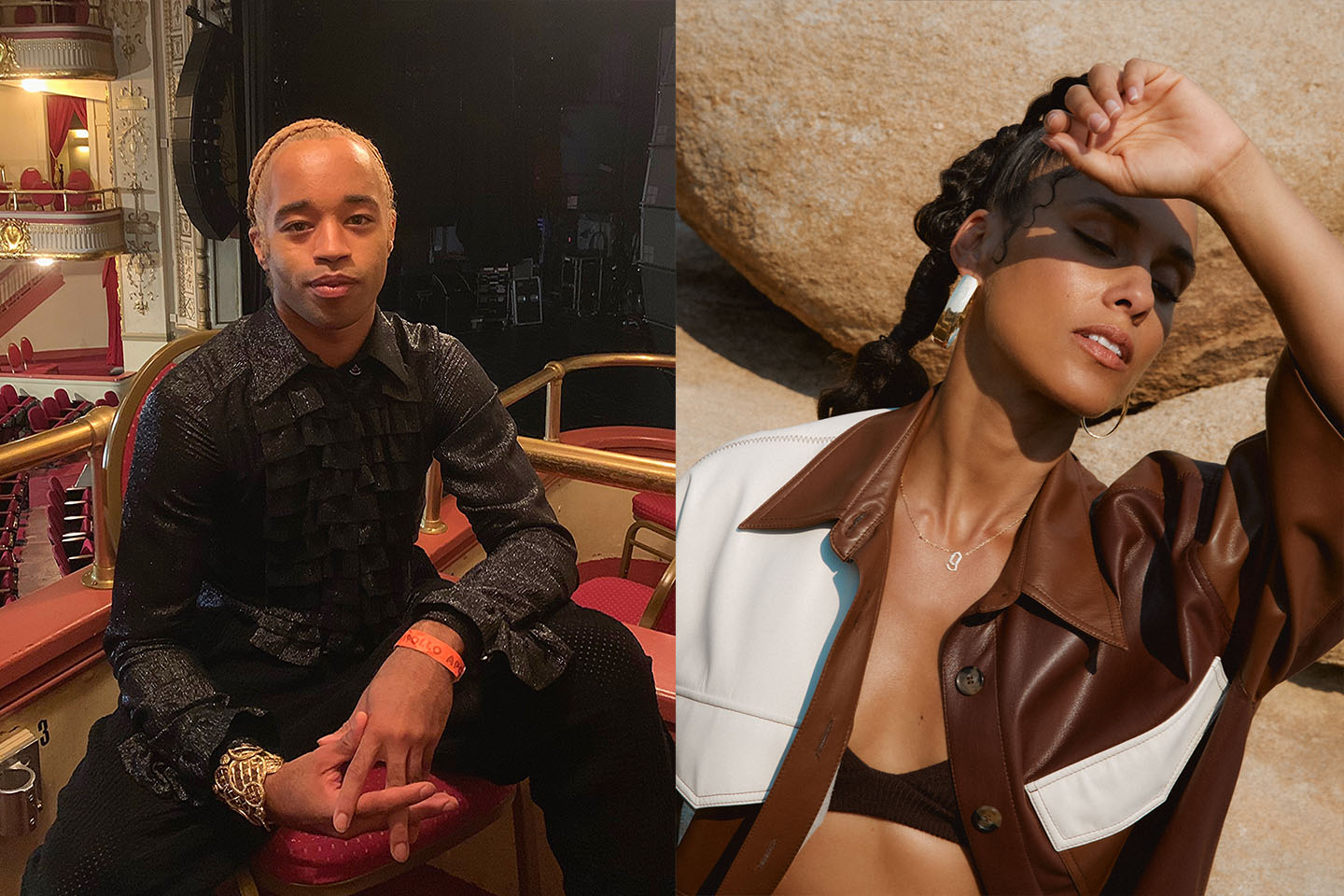 As a longstanding patron of dance, fashion icon Gabrielle Chanel was a symbol of innovation, having catalyzed artistic connections across disciplines throughout her career – a distinctly modern approach that was embraced by Karl Lagerfeld and carried on today by Virginie Viard.  In a new collaboration, American Ballet Theatre partners with CHANEL to launch Pas de Deux, a limited documentary series exploring the intersection of dance and other diverse art forms.  Premiering Thursday, October 29, 2020 at 7:00PM EDT on American Ballet Theatre’s YouTube channel and IGTV, ABT dancers and pioneering creators in art, music, food, and film come together to discuss their unique approaches and their shared inspirations.

Produced by Oscar®-winning Little Monster Films, each Pas de Deux episode sets the stage for two artists to delve into each other’s process and craft in intimate 15-minute conversations that culminate in new artistic creations.  Created by ABT Soloist Gabe Stone Shayer, Pas de Deux takes viewers into the homes and workspaces of each dancer and collaborator, allowing these diverse creators the opportunity to connect virtually for an exchange of ideas.

“Pas de Deux is inspired by one of those nights in New York City where you meet interesting people who inspire you,” said Shayer.  “The idea first hit me when thinking about how I could continue to create in quarantine.  I wanted to highlight the innovation that is magnified by an artist feeling stifled.  I’m obsessed with multimedia collaborations and felt this was the moment where we could explore the intersection of art and artists.”

“Dance as an art form has always inspired me,” said director Chai Vasarhelyi, head of Little Monster Films. “Whether our subjects are climbing vertical cliff faces or choreographing a ballet, we are inspired by movement, ambition, and creation. I have long been a fan of the ballet and having this opportunity to collaborate with some of the world’s best dancers alongside other iconic artists and creators has been so fulfilling for me. By connecting these great artists, we aim to transcend individual performance to create something entirely new.”

• Pas de Deux creator and ABT Soloist Shayer with Grammy Award®-winning singer, songwriter and actor Alicia Keys. Additional dance footage for this episode was directed and filmed by Pierce Jackson.

Marcus Samuelsson is the acclaimed chef behind many restaurants worldwide. He has won multiple James Beard Foundation awards for his work as a chef and as host of No Passport Required, his public television series with Vox/Eater. Samuelsson was crowned champion of Top Chef Masters and Chopped All Stars, and was the guest chef for President Obama’s first state dinner. A committed philanthropist, Samuelsson is co-chair of Careers through Culinary Arts Program (C-CAP), which focuses on underserved youth. Author of several cookbooks, in addition to the New York Times bestselling memoir Yes, Chef, Samuelsson also co-produces the annual Harlem EatUp! festival, which celebrates the food, art, and culture of Harlem. During the COVID-19 pandemic, Samuelsson converted his restaurants Red Rooster Harlem, Marcus B&P in Newark, and Red Rooster Overtown in Miami into community kitchens in partnership with World Central Kitchen, serving well over 200,000 meals to those in need. His podcast titled This Moment with Swedish rapper Timbuktu is out now. His newest cookbook, The Rise, was released this fall.

Kat Sullivan is a Brooklyn based artist, technologist, and educator. She earned her bachelor’s degree in Computer Science and Dance at Skidmore College, and worked as a software engineer and a freelance dancer in the Boston area. While earning her master’s degree at NYU’s Interactive Telecommunications Program (ITP), she developed a practice around creative coding, live performance, machine learning, motion capture, and other emerging technologies. Sullivan has presented works at Lincoln Center, National Sawdust, SXSW, and the Liberty Science Center, and was selected for residencies by Yale, Pioneer Works, RLab, and Ponderosa Dance. She has lectured at Brown University, Complutense University of Madrid, and The Center for Ballet and the Arts, and is currently an adjunct professor at NYU Tandon School of Engineering and Tisch School of the Arts.

Artist Chloe Wise was born in Montreal, Quebec. She earned her Bachelor of Fine Arts in studio art and art history from Concordia University in 2013. Her work spans diverse media, including painting, sculpture, video, and installation. Wise is now based in New York, where she creates paintings and objects rooted in societal critique and self-deprecating humor. Her work has been featured in 10 solo gallery exhibitions, including shows in Geneva, Paris, London, and New York.

Alicia Keys is a modern-day Renaissance woman—a 15-time Grammy Award®-winning artist/songwriter/musician/producer, an accomplished actress, a New York Times best-selling author, a film/television and Broadway producer, an entrepreneur, and a powerful force in the world of activism. Since the release of her monumental 2001 debut album, Songs in A Minor, Keys has sold over 65 million records and built an unparalleled repertoire of hits and accomplishments. Keys’ seventh studio album ALICIA was released in September 2020 to critical acclaim, topping Billboard’s Top R&B Albums Chart. The first single, “Show Me Love,” earned Keys a record-extending 11th number 1 on the Billboard Adult R&B Songs airplay chart, and her follow-up hit single, “Underdog,” went number 1 on the overall iTunes chart and became the most added song at Top 40 radio in the U.S. upon its release. Keys released her new book, More Myself: A Journey, on March 31, 2020 via Flatiron Books, which debuted and spent multiple weeks on the New York Times Bestseller List.

Born in Sun Valley, Idaho, Isabella Boylston began dancing at the age of three. While training at the Academy of Colorado Ballet, she won the gold medal in 2001 at the Youth America Grand Prix Finals in New York City. In 2002, she began training at the Harid Conservatory in Boca Raton, Florida, on a full scholarship. She joined ABT Studio Company in 2005, the main Company as an apprentice in May 2006, and the corps de ballet in March 2007. She was promoted to Soloist in June 2011 and to Principal Dancer in August 2014. She won the 2009 Princess Grace Award and was nominated for the 2010 Prix Benois de la Danse. She received the Clive Barnes Award in 2011 and the Annenberg Fellowship in 2014. She has appeared as a guest artist with the Mariinsky Ballet in St. Petersburg and the Royal Danish Ballet.

Cassandra Trenary, a native of Georgia, began her dance training at Lawrenceville School of Ballet. She joined the school’s company, Southern Ballet Theatre, in 2006 under the direction of Phyllis Allen and went on to receive additional training at Southeast Regional Ballet Association conventions and Brookwood High School’s Dance department. Trenary trained at American Ballet Theatre’s Summer Intensive programs as a National Training Scholar and went on to join the ABT Jacqueline Kennedy Onassis School in 2009. She performed with ABT II (now ABT Studio Company) in 2011, joined the main Company as an apprentice in April of that year, and the corps de ballet in November.  She was promoted to Soloist in August 2015 and appointed a Principal Dancer in September 2020. She was named a 2011 National YoungArts Foundation Winner and became a 2011 U.S. Presidential Scholar in the Arts nominee. She is the recipient of a 2015 Princess Grace Dance Honorarium and the 2017 Annenberg Fellowship for Dance.

Born in Buenos Aires, Argentina, Luciana Paris began her ballet training at the age of seven with Elena Perez. From 1991–1996 she studied at the Colon Theater Superior de Art Institute. She won a Gold Medal at the Latin American Dance Competition in 1995. In 1996, Paris was invited to join Ballet Camara and tour with the company in Argentina. She then joined the Teatro Colon Ballet as a soloist. In December 1996, she joined Julio Bocca’s Ballet Argentino as a principal dancer and became Bocca’s dance partner, touring nationally and internationally. She joined American Ballet Theatre as a member of the corps de ballet in October 2001 and was appointed a Soloist in August 2015. In 2008, she performed Twyla Tharp’s Sinatra Suite at the Kennedy Center Honors. In 2012, American Ballet Theatre designated Paris as a Certified Teacher.

Gabe Stone Shayer is a talented Soloist with American Ballet Theatre (ABT), known for his creative ability and desire to break barriers in the world of art and beyond. Born in Philadelphia, Pennsylvania, Shayer fell in love with dance at the age of three. At age 11, he began his formal training with Alexei Boitsov and Natalia Cherov and at age 14, Shayer began training at The Rock School for Dance. Shayer has received numerous awards and placed in several competitions, including the Grand Prix Award at the 2010 Youth America Grand Prix, finalist at the New York International Competition and the Clive Barnes Award for Dance in 2016. In 2009, he traveled to Moscow to attend the Bolshoi Ballet Academy Program where he won First Place for Best Male Dancer. He continued his studies at the Bolshoi Ballet Academy in Moscow under the tutelage of Ilya Kuznetsov. In 2011 he became the first African American male to graduate from the Bolshoi Ballet Academy in its nearly 250-year history. He joined ABT Studio Company in September 2011, the main Company as an apprentice in April 2012, and the corps de ballet in November 2012. Shayer was appointed Soloist with ABT in September 2020. As founder of Creative Genesis and the creative director of Pas de Deux, he continues to break creative boundaries on and off the stage.

Pierce Jackson was born in New York City. He has been directing films based on, and inspired by, dance for the last seven years. He has collaborated with brands and institutions including Kenneth Cole, LVMH, MoMA, The Whitney Museum, The Shed, and PERFORMA as well as publications such as Vogue, Interview Magazine, Paper Magazine, The New York Times, Visionaire, and Pin-Up Magazine to develop stories in fashion, culture, and the arts. Since 2014, along with his wife Dianna Mesion, Jackson has worked with the esteemed Bolshoi Ballet in Moscow to create promotional material and content for their live performance-to-cinema series campaigns.

Little Monster Films is the production company of Oscar®-winning filmmakers Chai Vasarhelyi and Jimmy Chin (FREE SOLO, MERU), who have made some of the most critically and commercially successful documentaries of the last decade. Little Monster strives to tell stories that are meditations on curiosity, ingenuity, creativity, perseverance, and ultimately the human spirit.