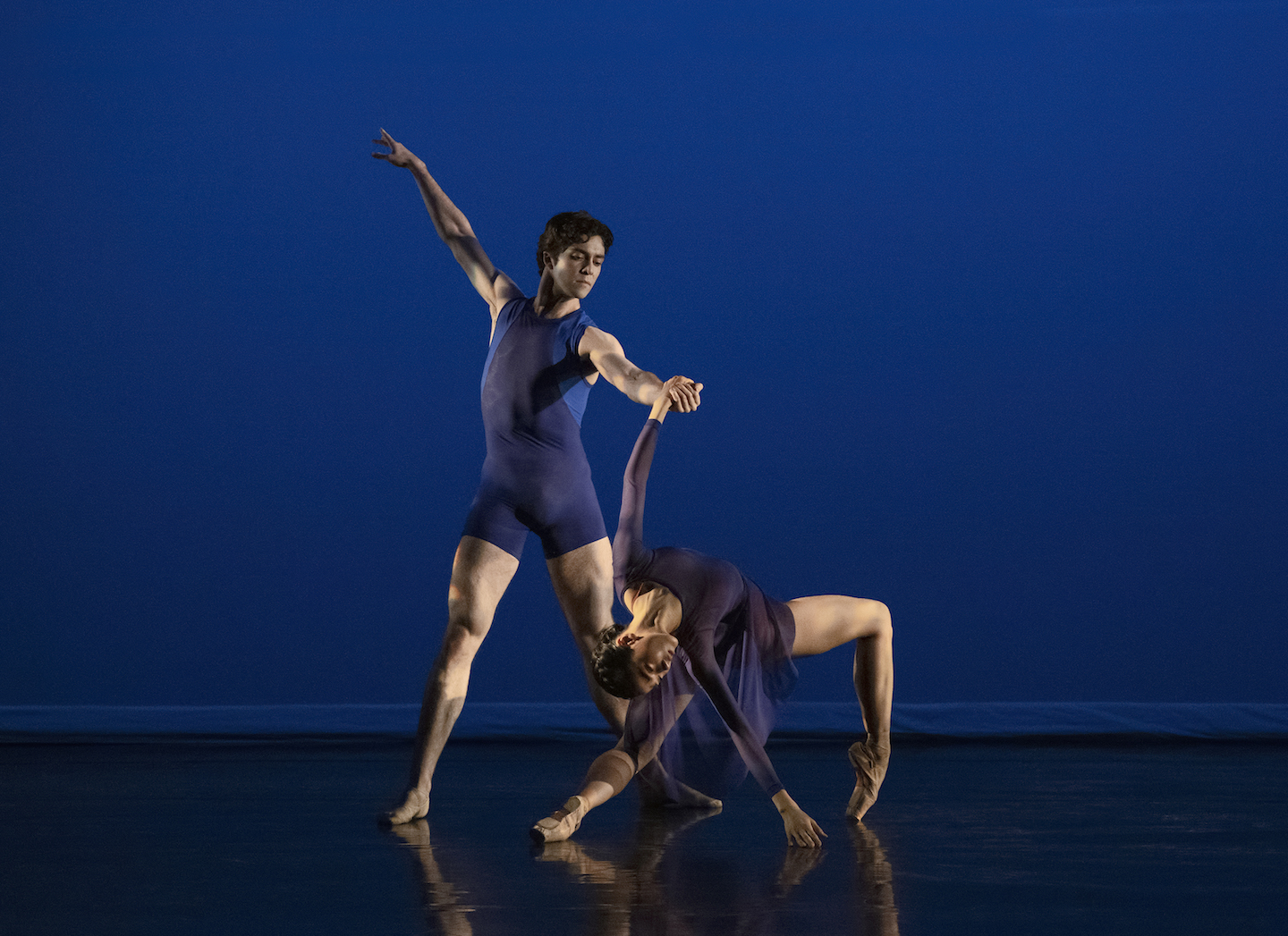 Speaking of the Spring Festival, ABT Studio Company Artistic Director Sascha Radetsky said, “During a four-week ballet bubble this spring, we prepared and created a range of ballets, including four original commissions from emerging and leading choreographers. The resulting program, filmed at Kaatsbaan Cultural Park by kw creative, features these world premieres plus select classical, neoclassical, and modern works, and showcases our young dancers’ talent, versatility, and ardent devotion to their art form.”

The ABT Studio Company Spring Festival opens on Wednesday, June 2 and will feature three World Premieres, as well as excerpts from the classical and neo-classical repertory.

Emily Kikta and Peter Walker, dancers with New York City Ballet, have choreographed Advice to the Young, a World Premiere and their first work for ABT Studio Company.  A work for 15 dancers, Advice to the Young, set to Night Drive (Deconstructed) – Instrumental by Twiceyoung, with voiceover by Patti Smith, was created over Zoom with dancers filming themselves performing the choreography outdoors in their hometowns and at Kaatsbaan Cultural Park.

Describing their creative process, Kikta and Walker said, “This ballet is set to a speech by Patti Smith. Although the speech dates to 2012, it feels just as relevant to the struggles of young artists today. Among other topics, Patti discusses the necessity of incorporating technology into art to adapt to our rapidly changing world. We worked with the Studio Company dancers in their homes around the world to create movement that complimented our customized filming directions. Advice to the Young is our attempt at utilizing technology to keep dancing and creating during this unpredictable time.”

The World Premiere of Yannick Lebrun’s Lora is set to music of the same name by Mpho Sebina. A solo, Lora was created over Zoom during the winter and spring of 2021.  “For this solo, I was inspired to write a letter to my younger self about future dreams and hopes,” said Lebrun.  Lora, Lebrun’s first work for ABT Studio Company, features costume design by Jermaine Terry.

Annabelle Lopez Ochoa has choreographed Scurry Night, her first work for ABT Studio Company, which will have its World Premiere on June 2.  Set to Dzovarev by Ara Malikian and Ciocårlia performed by Patricia Kopatchinskaja, the ballet for eight dancers features costumes by Mark Eric.  “Scurry Night was inspired by Banksy’s work, and particularly by his alter ego, the rat,” said Lopez Ochoa.  “The rat is a nocturnal rodent, who like the graffiti artist engages in activities without being caught. The rat, also an anagram for the word ‘art,’ is a resilient entity that adapts to any given situation. During the pandemic, dancers have proven that nothing will prevent them from expressing and sharing the beauty of ballet.”

The first duet from Alexei Ratmansky’s Seven Sonatas, staged by Stella Abrera, will receive its ABT Studio Company premiere on Wednesday evening, June 2.  The duet is set to Keyboard Sonata in F Minor, K. 481 by Domenico Scarlatti, performed by Michael Scales.  The ballet features costumes by Holly Hynes and original lighting by Brad Fields.  Seven Sonatas was given its World Premiere by American Ballet Theatre in 2009.  A suite from Seven Sonatas, featuring other excerpts from the ballet, was previously performed for the 2021 ABT Studio Company Winter Festival.

Act I of the ABT Studio Company Spring Festival will also include a performance of the pas de deux from Kermesse in Bruges by Bournonville and the pas de deux from Flames of Paris.  Set to music by Holger Simon Paulli, Kermesse in Bruges is staged by Petrusjka Broholm. Flames of Paris is set to music by Boris Asafyev and staged by ABT Studio Company Artistic Director Sascha Radetsky, after choreography by Vasily Vainonen

The ABT Studio Company Spring Festival (Act II) will continue Thursday, June 3 at 7 P.M., featuring a World Premiere and works from ABT’s extensive repertoire, including both classic and contemporary works showcasing a range of choreographic styles.

Jessica Lang has choreographed Children’s Songs Dance for seven members of ABT Studio Company.  Set to selections from Children’s Songs by the late American jazz composer Chick Corea, the ballet features film direction by Lang and Kanji Segawa, and costumes styled by Isabella Boylston. Children’s Songs Dance was created in January 2020 during a residency at The Pocantico Center in Tarrytown, New York, and will receive its World Premiere on Thursday, June 3.  Segawa served as creative associate to the work.  “My creative process with Chick was magical,” said Lang.  “He was extraordinarily generous, passionate about sharing his music, and excited about creating a ballet to his music, Children’s Songs.  It was a true collaboration.  Children’s Songs Dance draws its inspiration from the transition in life between being a child and becoming an adult, with the goal of never losing the spirit of play.”

Act II of the ABT Studio Company Spring Festival will include excerpts from Paul Taylor’s masterwork Airs and the classic Swan Lake.

Airs was staged for ABT Studio Company over Zoom by Laura Halzack.  Set to music by George Frederic Handel, Airs features costumes by Gene Moore and original lighting by Jennifer Tipton.  Airs received its World Premiere by the Paul Taylor Dance Company in 1978 and was given its American Ballet Theatre Premiere in 1981.

Odette’s variation from Act II of Swan Lake and the Pas de Trois from Act I will round out the ABT Studio Company performance.  Set to music by Peter Ilyitch Tchaikovsky, Odette’s variation was staged over Zoom by Yan Chen and the Pas de Trois was staged by ABT Studio Company Artistic Director Sascha Radetsky.  Swan Lake features choreography by Kevin McKenzie, after Marius Petipa and Lev Ivanov, with costumes by Zack Brown.

ABT Studio Company, under the artistic direction of Sascha Radetsky, is a classical ensemble of dancers of outstanding potential aged 17–21.  As the highest level of the ABT training ladder, ABT Studio Company serves as a crucial bridge between ballet training and professional performance.  80% of the current dancers in American Ballet Theatre began their careers in ABT Studio Company, including seven Soloists and twelve Principal Dancers.  Each season, ABT Studio Company commissions new choreography, allowing the dancers to participate in the process of new work creation.  ABT Studio Company engages the broadest possible ballet audience by performing varied, vital repertoire in a range of venues around the globe.

ABT Studio Company Spring Festival, streaming free through July 3, 2021, is produced by kw creative and filmed and edited by Emily Kikta and Peter Walker.  Lighting direction is by Ash Umhey, courtesy of Kaatsbaan Cultural Park. Brad Fields served as lighting consultant for the Spring Festival.

A complete schedule of works for ABT Studio Company Spring Festival follows.

Champion support for the ABT Women’s Movement is provided by Jenna Segal. Additional leadership support provided by the Virginia B. Toulmin Foundation.