with the ABT William J. Gillespie School at Segerstrom Center for the Arts

Did you know that American Ballet Theatre’s home is in New York City?

Did you know that American Ballet Theatre has a second home all the way across the country in Costa Mesa, California?

For over 30 years, American Ballet Theatre has performed at Segerstrom Center for the Arts (formerly Orange County Performing Arts Center), presenting a number of ABT premieres, including Alexei Ratmansky’s Firebird (2012), Whipped Cream (2017) and Of Love and Rage (2020)

In 2000, the SCFTA became a satellite program for ABT’s Summer Intensives and in 2015 launched an official ABT School on the west coast.

Under the direction of Principal Alaine Haubert, the ABT William J. Gillespie School finished their spring 2020 semester strong virtually with 288 students enrolled! Now in its fifth year, the School offers classes in ballet technique, pointe, character dance, pas de deux, body conditioning, and men’s classes between their Children’s and Pre-Professional Divisions. The School’s location at  Segerstrom Center provides unparalleled access to world-renowned companies and experiences including master classes, artist receptions, ticket offers, and lectures by visiting artists. Students have also benefitted from the opportunity to work and perform with American Ballet Theatre in productions of Alexei Ratmansky’s The Nutcracker, Whipped Cream, and Harlequinade during their tours to Costa Mesa.

According to Haubert – who has been associated with American Ballet Theatre since 1965 as a dancer, coach, Ballet Mistress, adjudicator, director of Summer Intensives, and advisor for the ABT National Training Curriculum – her goal for the ABT Gillespie School and as a teacher is to “share Ballet Theatre’s history and her experiences with Lucia Chase, Antony Tudor, and Agnes de Mille.” She believes firmly in having “the theater in the School” and considers it her job to “share the musicians and the choreographers, not just the vocabulary and technique…to pass on a torch to future generations.” Haubert has chosen her faculty carefully and credits all teachers at the ABT Gillespie School on their passion for teaching; “there are so many good ballet teachers, but you need to have passion to make a difference.”

Former ABT Dancer Kenneth Easter spent 13 years performing with American Ballet Theatre before moving to the west coast to begin his second career as a faculty member of the ABT William J. Gillespie School.

Join one of ABT’s Teaching Artists as they introduce you to one of ABT’s fabulous ballets. Learn a dance, stop and sketch, and don’t forget to have fun!

Up this week: Ms. Sarah from the ABT William J. Gillespie School!

American Ballet Theatre’s first performance in Costa Mesa, California was in 1988 with the World Premiere of Mikhail Baryshnikov’s then-newly envisioned production of Swan Lake. Over the next 32 years, hundreds of ABT dancers have graced the stage of Segerstrom Center for the Arts.

See if you can find the titles of the many ballets performed at SCFTA in the word search below.

Every Thursday we pull a photo from our archives and share it with one of our ABT dancers. You never know what stories may come from a single snapshot!

Definition
1: a supernumerary person or thing
2: an actor employed to play a walk-on

“As  a Gillespie student, I’ve been so fortunate and grateful to perform many super roles with ABT. My favorite role I have performed with ABT is one of the  ‘Little Harlequins’  in Harlequinade.  I really enjoyed this role because I never felt stress when dancing, but just pure fun! It’s one of those parts that you can enjoy with no worry and really feel the happiness of dancing on stage.”

Supers from The Sleeping Beauty in 2015.
Photo: Doug Gifford.

Principal children from The Nutcracker with Alexei Ratmansky in 2016.
Photo: Doug Gifford.

Little Harlequins and Fairies from Harlequinade with Kenneth Easter in 2018.
Photo: Whitney Kofford.

Throwback to The Nutcracker in 2015 - Can you find Chase?

Write about a time you were doing something you loved and felt pure joy. 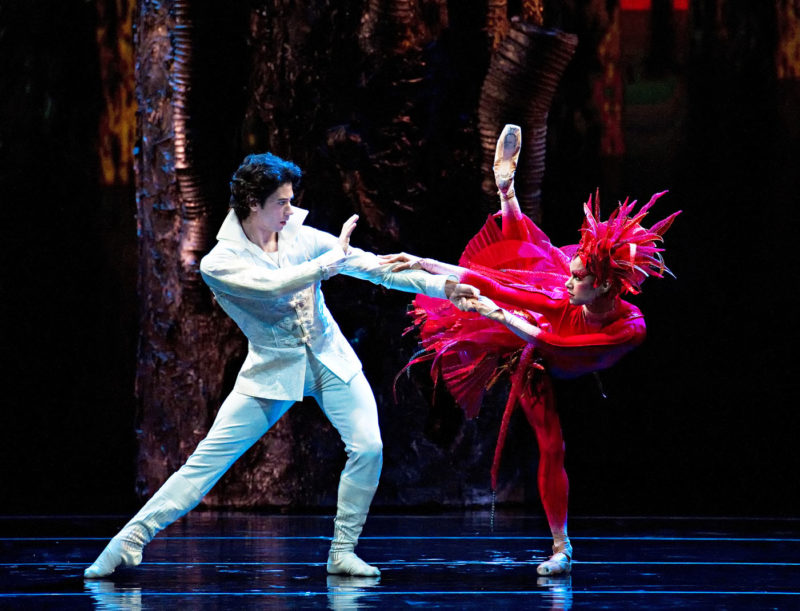 Alexei Ratmansky’s Firebird received its World Premiere at the Segerstrom Center for the Arts in 2012.
Pictured: Misty Copeland and Herman Cornejo in Firebird. Photo: Gene Schiavone.

These classes engaged, recommended for ages 2-4 and 5-8, by explore musicality, foster creativity and imagination, and teach ballet fundamentals. These classes engage ABT’s youngest students and their families, as well as the global community at large!