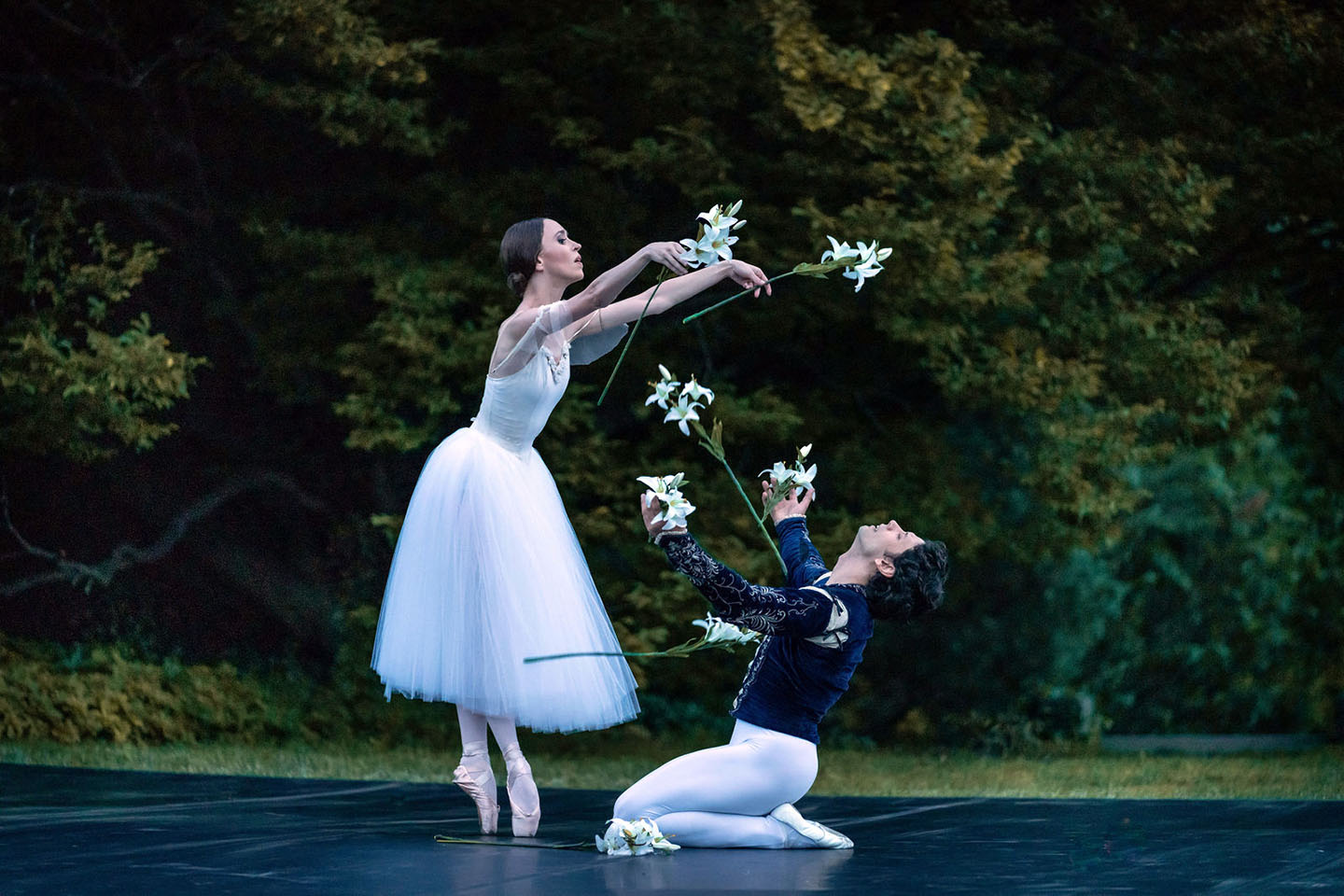 In its return to indoor performances in New York City, American Ballet Theatre will present the 2021 Fall season at the David H. Koch Theatre, October 20-31, 2021.  The season was announced today by Artistic Director Kevin McKenzie.  ABT’s first New York Fall season since 2019 will feature the World Premiere of ZigZag by Jessica Lang, co-commissioned by Abu Dhabi Festival, the stage premieres of Bernstein in a Bubble by Alexei Ratmansky and Touché by Christopher Rudd, and ABT masterworks Pillar of Fire and Some Assembly Required.

American Ballet Theatre’s 2021 Fall season will open on Wednesday, October 20 with the full-length Giselle.  Staged by Kevin McKenzie with choreography after Jean Coralli, Jules Perrot, and Marius Petipa, Giselle is set to music by Adolphe Adam, orchestrated by John Lanchbery, with scenery by Gianni Quaranta, costumes by Anna Anni, and lighting by Jennifer Tipton.  The world premiere of Giselle, one of the oldest continually performed ballets, occurred at the Theatre de l’Academie Royale de Musique in Paris on June 28, 1841.  The ballet was first presented by ABT (then Ballet Theatre) at the Center Theatre in New York City on January 12, 1940, with choreography by Anton Dolin and scenery and costumes by Lucinda Ballard.  The leading roles were danced by Annabelle Lyon and Anton Dolin.  ABT’s sixth production, featuring scenery by Gianni Quaranta and costumes by Anna Anni, was created for the film Dancers, produced in 1987 by Cannon Films.  This production’s first public performance was given on March 20, 1987 at the Shrine Auditorium in Los Angeles, California, with Marianna Tcherkassky as Giselle and Kevin McKenzie as Albrecht. The current staging is by McKenzie, using the Quaranta and Anni designs.  Giselle will be given six performances through Sunday, October 24.

The Fall Gala on Tuesday evening, October 26 at 6:30pm will feature ABT’s Company dancers in a program of two of the 22 new works created in quarantined bubbles over the last 17 months, as well as the World Premiere of Jessica Lang’s ZigZag, co-commissioned by Abu Dhabi Festival.  ABT Trustee Jenna Segal, champion supporter of the ABT’s Women’s Movement, will be honored at the Gala with The Melville Straus Leadership Achievement Award.  To date, the Women’s Movement has produced 28 World and Company Premieres for ABT and ABT Studio Company.

ZigZag, choreographed by Jessica Lang and set to 11 recorded songs sung by Tony Bennett, will have its World Premiere at American Ballet Theatre’s 2021 Fall Gala.  A work for 14 dancers, ZigZag will feature costumes by Wes Gordon (creative director for Carolina Herrera), scenery by Emmy and Tony Award® winner Derek McLane, incorporating artwork by Bennett, and lighting by Nicole Pearce.

“ZigZag celebrates the legendary career of Tony Bennett as a singer and visual artist,” said Lang.  “With 11 songs carefully selected from Bennett’s masterful catalog of recordings spanning more than seven decades, and scenic elements that incorporate his art, ZigZag will highlight the unwavering quality and genuine humanity of his vocal performances.  My approach to ZigZag will be to deliver a balance between physical intricacy and visual simplicity, to convey art as entertainment, and to highlight the physically brilliant range of the American Ballet Theatre dancers.”  ZigZag, Lang’s fourth work for ABT, will be given four performances through Sunday matinee, October 31.

Antony Tudor’s masterwork Pillar of Fire, last performed by ABT in 2015, will be given three performances at the Koch Theater beginning Thursday evening, October 28.  Staged for ABT by Amanda McKerrow and John Gardner, Pillar of Fire is set to music by Arnold Schoenberg (Verklärte Nacht) with scenery and costumes by Robert Perdziola and lighting by Duane Schuler.  The ballet was given its World Premiere on April 8, 1942 at the Metropolitan Opera House in New York City.

Clark Tippet’s Some Assembly Required will be given two performances during the Fall season, Wednesday evening, October 27 and Saturday evening, October 30.  Staged by McKerrow and Gardner, Some Assembly Required is set to music by William Bolcom (Second Sonata for Violin and Piano) and features costumes by Gary Lisz and lighting by Jennifer Tipton.  The ballet received its World Premiere at the Kennedy Center for the Performing Arts in Washington, D.C. on April 14, 1989.

Lauren Lovette’s La Follia Variations, Darrell Grand Moultrie’s Indestructible Light, Alexei Ratmansky’s Bernstein in a Bubble, and Christopher Rudd’s Touché will be featured during the second week of American Ballet Theatre’s Fall season.  All three works were created in quarantined settings over the course of the COVID pandemic.

La Follia Variations, choreographed by Lovette and set to music of the same name by Francesco Geminiani and arranged by Michi Wiancko, with costumes by Victor Glemaud and lighting by Brad Fields, will receive its New York stage premiere on Tuesday evening, October 26.  La Follia Variations received its digital World Premiere by ABT Studio Company on February 9, 2021, and its ABT Company Premiere on April 25, 2021 at Segerstrom Center for the Performing Arts in Costa Mesa, California.  The ballet will be given four performances during the Fall season.

Moultrie’s Indestructible Light, set to recorded music by Duke Ellington, Count Basie, Neal Hefti, Billy Strayhorn, and Chuck Harmony, will be given two performances beginning Wednesday evening, October 27.  Indestructible Light features costumes by Marc Eric and lighting by Brad Fields.  The work was created at P.S. 21 in Chatham, New York and given its digital World Premiere on November 23, 2020.  Indestructible Light was reimagined for the stage and received its West Coast premiere at Segerstrom Center for the Performing Arts on April 25, 2021.

Ratmansky’s Bernstein in a Bubble is set to Divertimento by Leonard Bernstein, with costumes by Moritz Junge and lighting by Brad Fields.  Created in January and February 2021 in Silver Bay, New York, the ballet received its digital World Premiere at ABT Live from City Center | A Ratmansky Celebration on March 23, 2021.  Bernstein in a Bubble, Ratmansky’s 18th work for ABT, will be given two performances through Sunday matinee, October 30.

Touché, choreographed by Rudd and set to music by Woodkid (Que Te Mate el Desierto) and Ennio Morricone (Giuseppe Tornatore Suite from Malena) with intimacy direction by Sarah Lozoff, will receive its New York stage premiere on Tuesday evening, October 26.  Touché, which will be given three performances during the Fall season, was created in Silver Bay, New York and received its digital World Premiere on November 23, 2020 as part of ABT Today: The Future Starts Now.  The New York Premiere of Touché will be celebrated with two dedicated Pride Nights at the Koch Theater on Wednesday evening, October 27 and Saturday evening, October 30.  These special evenings will highlight LGBTQIA+ diversity, equity, and visibility.  Commenting on Pride Nights, Kara Medoff Barnett, Executive Director of ABT said: “These special evenings of Christopher Rudd’s intimate and powerful pas de deux will celebrate and elevate LGBTQIA+ experiences on stage.  We are proud to produce and present art that advances equity and visibility in ballet.”

Tickets for American Ballet Theatre’s 2021 Fall season, starting at $30, are available beginning Wednesday, September 8 at 10 A.M. in person at the Koch Theater box office, by phone by calling 212-496-0600, and online. Up until noon on the day of performance during the 2021 Fall Season, ABT will offer audience members the opportunity to exchange their tickets or receive refunds free of charge. Based on CDC and New York State guidelines at the time of performance, entry requirements for both adults and children may include valid proof of vaccination with a CDC approved COVID vaccine and/or negative test verification, mask usage, and more.

Pillar of Fire is generously underwritten by an endowed gift by Avery and Andrew F. Barth and Carmen Barth Fox, in honor of Antony Tudor.

Costumes for Some Assembly Required are generously sponsored through the Ellen Everett Kimiatek Costume Preservation Trust.

American Ballet Theatre recognizes The Straus Family Foundation for its leadership support in honor of ABT Artistic Director Kevin McKenzie.

Bank of America, Lead Corporate Partner of ABT Studio Company.