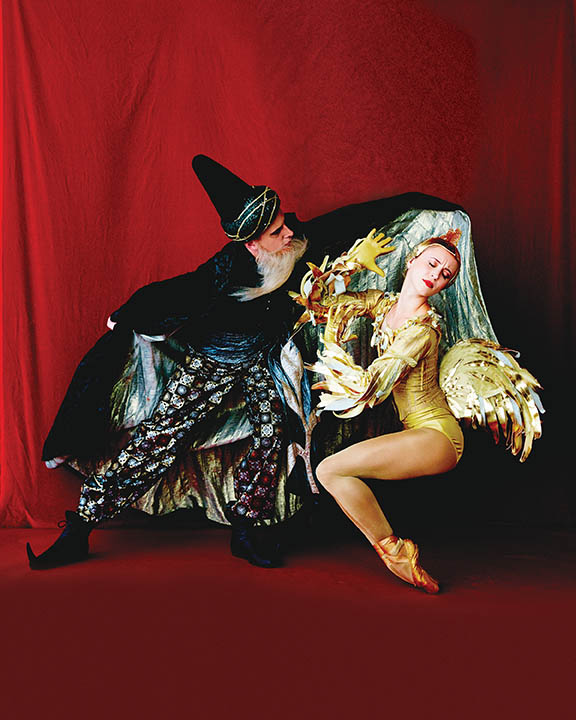 Skylar Brandt and Duncan Lyle in The Golden Cockerel.

American Ballet Theatre’s 2016 Spring season will be highlighted by a World Premiere work by Alexei Ratmansky, the American Premiere of Ratmansky’s The Golden Cockerel and a revival of Frederick Ashton’s La Fille mal gardée. Tickets for ABT’s Spring Season at the Metropolitan Opera House go on sale at the box office on Sunday, March 20 at 12 Noon.

Former American Ballet Theatre Principal Dancer Alessandra Ferri will perform as a Guest Artist on Thursday evening, June 23 in the role of Juliet in Romeo and Juliet for the first time since her retirement from the Company in 2007.  Xander Parish of the Mariinsky Ballet will debut with the Company as an Exchange Artist.  Parish will dance the role of Aminta in Frederick Ashton’s Sylvia at the matinee on Wednesday, May 11 and Saturday evening, May 14.  Principal Dancers Stella Abrera and Gillian Murphy will also celebrate their 20th anniversary of performances with the Company.

American Ballet Theatre’s 2016 Spring Gala will be held during the second week of the Met season on Monday, May 16 at 6:30 P.M. The Gala performance will include a World Premiere by Alexei Ratmansky, set to Leonard Bernstein’s Serenade after Plato’s Symposium, Ratmansky’s Firebird and excerpts from the season’s repertoire.  For information on ABT’s 2016 Spring Gala, please call the Special Events Office at 212-477-3030, ext. 3310.

The second week of American Ballet Theatre’s Spring season, May 17-23, will feature two repertory programs of works choreographed by Alexei Ratmansky.   The first program, Ratmansky’s 2013 Shostakovich Trilogy, features the choreographer’s Symphony #9, Chamber Symphony and Piano Concerto #1.  Shostakovich Trilogy will be given four performances, May 17, 20, 21 evening and 23.  A triple bill of Ratmansky works, featuring the Ratmansky/Bernstein premiere, Seven Sonatas (2009) and Firebird (2012), will have four performances, May 18 matinee and evening, May 19 and the matinee of May 21.

Based on Alexander Pushkin’s folktale, The Golden Cockerel was first presented on May 21, 1914 at the Théacute;âtre Nationale de l’Opera, Paris, with choreography by Michel Fokine and scenery and costumes by Natalia Goncharova.  Ratmansky’s choreography for The Golden Cockerel received its World Premiere by the Royal Danish Ballet on September 29, 2012 at the Copenhagen Opera House, Denmark.  Ann Holm-Jensen Peyk will assist in the staging of the ballet for ABT.

Frederick Ashton’s La Fille mal gardée returns to the repertory on Tuesday evening, May 24 for eight performances through Monday, May 30.  Set to music by Ferdinand Hérold, freely adapted and arranged by John Lanchbery from the 1828 version, La Fille mal gardée features designs by Osbert Lancaster, a scenario by Jean Dauberval and lighting by Brad Fields.  Isabella Boylston and Jeffrey Cirio will dance the leading roles of Lise and Colas in the ballet’s first performance of the season on May 24.  Gillian Murphy will celebrate her 20th Anniversary with ABT at the evening performance on Saturday, May 28.  La Fille mal gardée received its World Premiere by The Royal Ballet at the Royal Opera House, Covent Garden, London on January 28, 1960, danced by Nadia Nerina (Lise), David Blair (Colas), Alexander Grant (Alain) and Stanley Holden (Widow Simone).  The ballet received its United States Premiere by The Royal Ballet at the Metropolitan Opera House, New York on September 14, 1960, danced by the same cast.

La Fille mal gardée received its American Ballet Theatre Company Premiere at the Metropolitan Opera House, New York on May 31, 2002, danced by Ashley Tuttle (Lise) and Ethan Stiefel (Colas).  Last performed by ABT in 2003, the ballet will be staged for the Company by Malin Thoors.

Gillian Murphy, Marcelo Gomes and James Whiteside will dance the leading roles in the season’s first performance of Ashton’s Sylvia on Monday evening, May 9.  A ballet in three acts, Sylvia is set to music by Léo Delibes and features costumes and scenery after original designs by Robin and Christopher Ironside.  Additional designs for Sylvia are by Peter Farmer and lighting is by Mark Jonathan.  The World Premiere of the original production of Sylvia was given by The Royal Ballet on September 3, 1952 at the Royal Opera House, Covent Garden, London, danced by Margot Fonteyn (Sylvia), Michael Somes (Aminta), John Hart (Orion) and Alexander Grant (Eros).  The World Premiere of this revival of Sylvia by was given by The Royal Ballet on November 4, 2004 at the Royal Opera House, Covent Garden, danced by Darcey Bussell (Sylvia), Jonathan Cope (Aminta), Thiago Soares (Orion) and Martin Harvey (Eros).  Sylvia received its American Ballet Theatre Company Premiere at the Metropolitan Opera House, New York on June 3, 2005, danced by Gillian Murphy (Sylvia), Maxim Beloserkovsky (Aminta), Marcelo Gomes (Orion) and Herman Cornejo (Eros).  Sylvia was last performed by ABT in 2013.

Eight performances of Swan Lake, choreographed by Kevin McKenzie after Marius Petipa and Lev Ivanov, will be given beginning Monday, June 13 with Polina Semionova and Marcelo Gomes leading the opening night cast.  Swan Lake is set to the score by Peter Ilyitch Tchaikovsky and features scenery and costumes by Zack Brown and lighting by Duane Schuler.  This production of Swan Lake premiered on March 24, 2000 at the Kennedy Center for the Performing Arts in Washington, D.C. with Julie Kent (Odette-Odile), Angel Corella (Prince Siegfried) and Marcelo Gomes (von Rothbart). Kenneth MacMillan’s Romeo and Juliet will be given eight performances beginning Monday evening, June 20 with Hee Seo and Cory Stearns in the title roles.  Set to the score by Sergei Prokofiev, Romeo and Juliet features scenery and costumes by Nicholas Georgiadis and lighting by Thomas Skelton.  Romeo and Juliet received its World Premiere by The Royal Ballet in London on February 9, 1965 and was given its ABT Company Premiere at the Metropolitan Opera House on April 22, 1985 with Leslie Browne and Robert La Fosse in the leading roles.

Last season’s World Premiere production of Alexei Ratmansky’s The Sleeping Beauty returns to the Metropolitan Opera House for eight performances beginning Monday evening, June 27 with Isabella Boylston and Joseph Gorak in the leading roles. Stella Abrera will debut in the role of Aurora on Thursday evening, June 30.  The performance will also celebrate Abrera’s 20th Anniversary with ABT. Set to the classic score by Peter Ilyitch Tchaikovsky, The Sleeping Beauty has choreography by Marius Petipa and staging and additional choreography by Alexei Ratmansky, with assistance by Tatiana Ratmansky.  The production features scenery and costumes by Tony Award®-winning designer Richard Hudson.  Hudson’s designs are based on the historic work of Léon Bakst, who created a seminal version of The Sleeping Beauty for Serge Diaghilev’s Ballets Russes in 1921. The Sleeping Beauty received its World Premiere on March 3, 2015 at Segerstrom Center for the Arts in Costa Mesa, California, danced by Diana Vishneva (Princess Aurora) and Marcelo Gomes (Prince Désiré).

ABTKids, American Ballet Theatre’s annual one-hour introduction to ballet for young audience members and their families, is scheduled for Saturday morning, June 11 at 11:30 A.M.  The performance is recommended for children ages 4-12, and features child-friendly highlights from the season’s repertoire.  All tickets for ABTKids are $25.

Individual tickets for American Ballet Theatre’s 2016 Spring Season at the Metropolitan Opera House, on sale beginning Sunday, March 20 at 12:00 Noon, are available at the Met box office, by phone at 212-362-6000, or online at ABT’s website www.abt.org.  Tickets start at $20. The Metropolitan Opera House is located on Broadway between 64th and 65th streets in New York City.

Sylvia is generously supported through an endowed gift from Ruth and Harold Newman.

La Fille mal gardée has been generously supported through an endowed gift from The Toni and Martin Sosnoff New Works Fund.

The American Premiere of The Golden Cockerel has been generously underwritten by an anonymous donor.  This production has been generously supported through an endowed gift from The Toni and Martin Sosnoff New Works Fund.  Additional support provided by Michele and Steve Pesner.

ABT gratefully acknowledges Lead Sponsor of The Sleeping Beauty, David H. Koch.   Additional leadership support is generously provided by the Lloyd E. Rigler – Lawrence E. Deutsch Foundation.  ABT gratefully acknowledges Linda Allard for her generous support of costumes for The Sleeping Beauty.  Additional support is generously provided by Avery and Andrew F. Barth, The Susan and Leonard Feinstein Foundation, Caroline and Edward Hyman, Howard S. Paley, Linda and Martin Fell, Mr. and Mrs. Austin T. Fragomen, The Ted and Mary Jo Shen Charitable Gift Fund, and Michael and Sue Steinberg.  Support has also been provided by the National Endowment for the Arts. This production is generously supported through an endowed gift from the Toni and Martin Sosnoff New Works Fund.  This production of The Sleeping Beauty is a co-production with Teatro alla Scala.