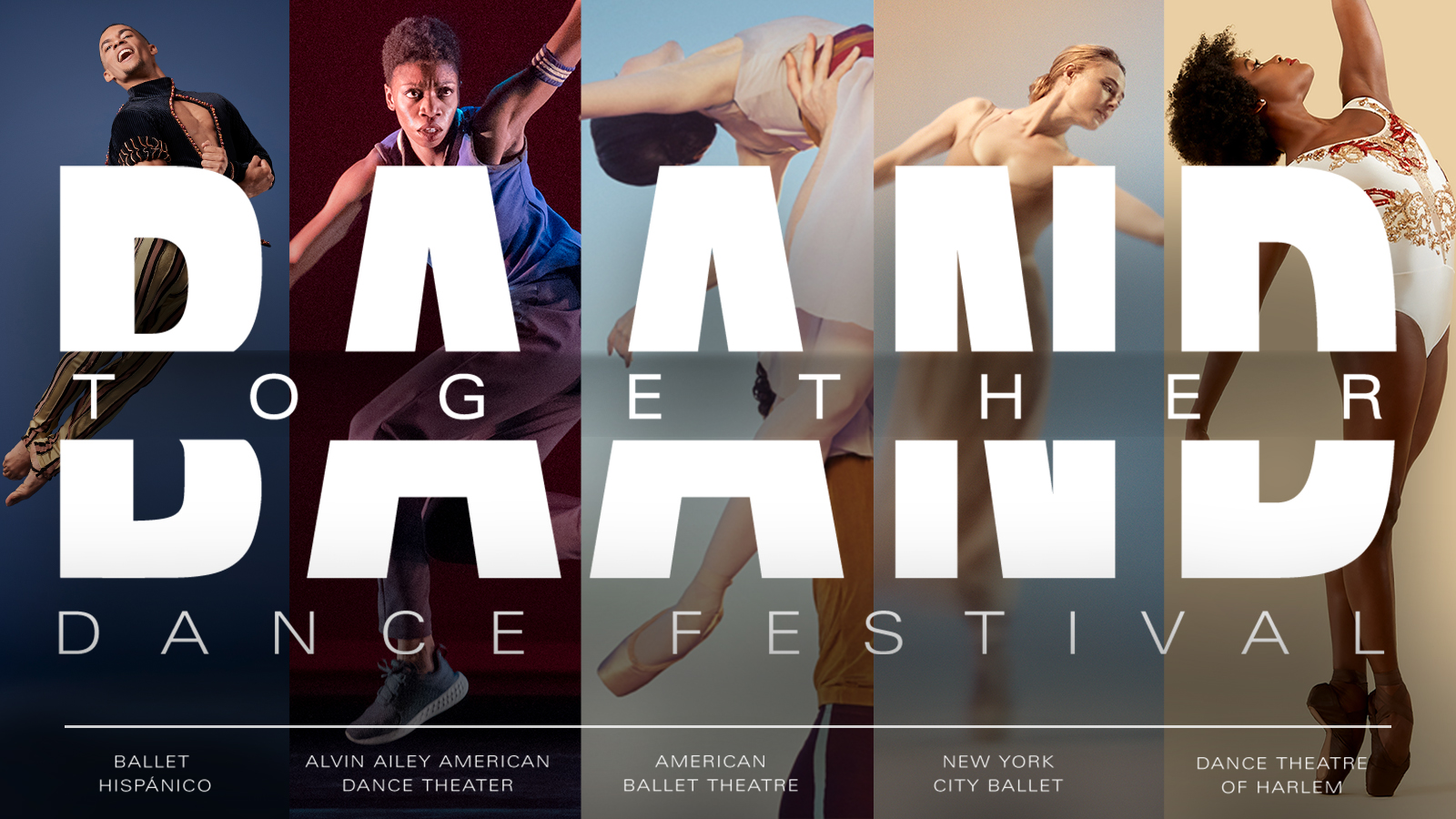 New York, NY (July 6, 2021) – Five of New York City’s most acclaimed dance companies—Ballet Hispánico, Alvin Ailey American Dance Theater, American Ballet Theatre, New York City Ballet, and Dance Theatre of Harlem—will perform on the same stage at the first BAAND Together Dance Festival in Damrosch Park as part of Restart Stages, the new outdoor performing arts center constructed on the Lincoln Center campus to champion the city’s cultural and economic revival. The Festival is made possible by CHANEL and is a project of the Arnhold Dance Innovation Fund.

In five performances, the companies will share a different mixed bill, offering audiences the unique experience of evenings curated collaboratively by the artistic directors of each of the organizations.

“Through the challenges of this past year, we made a commitment to meet weekly to act as a structure and a support for one another, our companies, and our community. This festival is a direct result of hours and hours of conversations, over months that informed our decision-making processes, individually and collectively, permitted our continued growth during the difficult times, and deepened our commitment to our field and our city. This festival is a celebration of the glory of our art and the power of unity.”

Free assigned seats for each evening will be made available through the TodayTix Lottery, the Official Ticketing Partner of Restart Stages. The TodayTix Lottery will open for entries two weeks before the performance and close three days prior to the performance at 12:59 p.m. EDT. For more information visit TodayTix.com or download the TodayTix app. For those without access to the app, please call Lincoln Center Guest Services at 212-875-5456 to reserve.*

This performance will also be open to general admission. Beginning 10 minutes before the show, non-ticketed guests will be invited to claim any available seats.

As one of New York City’s leading arts institutions and an anchor of its cultural and public life, Lincoln Center is embarking on this effort as a symbol of its commitment to the city and to an equitable revitalization that elevates all New Yorkers. Restart Stages is a major, public-facing component of its broader effort to provide resources in this moment not just to Lincoln Center’s resident companies, but to the performing arts community as a whole — helping get artists back to work and supporting institutions from Brooklyn to the Bronx to engage their communities in the elevating power of the arts.

Designed with expert advice from medical and public health professionals, Restart Stages will create a safe, welcoming, accessible, and dynamic environment for arts and community organizations from across New York City, including Lincoln Center resident companies.

The initiative is being developed in coordination with NY State PopsUp, part of Governor Cuomo’s New York Arts Revival, in a partnership to help extend reach of the initiative far beyond Lincoln Center’s campus.

Select Restart Stages events are being offered via livestream on Lincoln Center and partner organization digital platforms, increasing access nationally and internationally, well beyond those able to travel to the physical campus. Visit RestartStages.org for more information.

* No purchase is necessary to enter the TodayTix Lottery and reserve free tickets for these August performances. The prize value of tickets is $0. The odds of winning tickets depend on the number of eligible entries received. The TodayTix Lottery is open to residents of the 50 United States and D.C., age 18 or over. Complete official rules, prize description, and giveaway entry information will be available on the TodayTix website at TodayTix.com.

When Alvin Ailey and a small group of African American dancers took the stage on March 30,1958 at New York City’s 92nd Street Y, the engagement was for one night only, but it turned out to be the start of a new era in the arts. Ailey envisioned a company dedicated to enriching the American modern dance heritage and preserving the uniqueness of the African American cultural experience. He became one of the trailblazers of modern dance, and the Ailey organization grew to encompass education, community outreach, and cultural diplomacy. To date, the Company has performed for an estimated 25 million people at theaters in 48 states and 71 countries on six continents as well as millions more through television, film, and online. More than 270 works by over 100 choreographers have been part of the Ailey repertory. In 2008, a US Congressional resolution designated the Company as “a vital American cultural ambassador to the world.” Before his untimely death in 1989, Ailey named Judith Jamison as his successor, and over the next 21 years, she brought the Company to unprecedented success. Jamison, in turn, personally selected Robert Battle to succeed her in 2011, and The New York Times declared he “has injected the comp any with new life.”

Designated America’s National Ballet Company® by an Act of Congress, American Ballet Theatre engages and inspires communities through the diversity, dynamism and power of world class dance. American Ballet Theatre is one of the greatest dance companies in the world, featuring extraordinary artists from 15 countries and 25 U.S. states. Few ballet companies equal ABT for its combination of size, scope, and outreach. Recognized as a living national treasure since its founding in 1940, ABT annually tours the United States, performing for more than 300,000 people. In 81 years, the Company has appeared in a total of 132 cities in 45 countries and has performed in all 50 states of the United States. During the pandemic, ABT and ABT Studio Company hosted 10 residency “bubbles” and created 21 new works distributed digitally. In July 2021, ABT launched ABT Across America, a trailblazing cross-country tour, sharing free, outdoor, live performances as a leading indicator of civic revitalization and renewal.

Founded in 1970 by National Medal of Arts recipient, Tina Ramírez, the organization emerged during the post-civil rights movement on New York’s Upper West Side, providing a safe haven for primarily Black and Brown Latinx youth seeking artistic sanctuary during New York City’s plight in the 1970s. The need for place, both culturally and artistically, led families to find Ballet Hispánico. The focus on dance as a means to develop working artists, combined with the training, authenticity of voice, and power of representation, fueled the organization’s roots and trajectory.

With its strong emphasis on dance, achievement, and public presence, the organization has flourished in its three main programs: its Company, School of Dance, and Community Arts Partnerships. The organization serves as a platform for historically omitted and overlooked artists providing them with increased capacity, voice, and affirmation.

Over the past five decades, by leading with Latinx culture at the forefront of performance, education, and advocacy, Ballet Hispánico’s mission is a catalyst of change and possibility for communities throughout our nation.

About Dance Theatre of Harlem

Dance Theatre of Harlem is a leading dance institution of unparalleled global acclaim, encompassing a professional touring company, a leading studio school, and a national and international education and community outreach program. Each component of Dance Theatre of Harlem carries a solid commitment towards enriching the lives of young people and adults around the world through the arts. Founded in 1969 by Arthur Mitchell and Karel Shook, Dance Theatre of Harlem is considered “one of ballet’s most exciting undertakings” (The New York Times). Shortly after the assassination of The Reverend Dr. Martin Luther King, Jr., Mitchell was inspired to start a school that would offer children especially those in Harlem, the community in which he was born, the opportunity to learn about dance and the allied arts. Now in its sixth decade, Dance Theatre of Harlem has grown into a multi-cultural dance institution with an extraordinary legacy of providing opportunities for creative expression and artistic excellence that continues to set standards in the performing arts. Dance Theatre of Harlem has achieved unprecedented success, bringing innovative and bold new forms of artistic expression to audiences in New York City, across the country, and around the world.

New York City Ballet, one of the foremost ballet companies in the world, was founded in 1948 by the legendary choreographer George Balanchine and arts patron Lincoln Kirstein, and quickly became world- renowned for its athletic and contemporary style. Jerome Robbins joined NYCB the following year and, with Balanchine, helped to build its extraordinary repertory. Today NYCB continues to be inspired by its founders who envisioned an authentically American expression of ballet with a company that reflects the rich cultural diversity of our city and nation. Under the leadership of Artistic Director Jonathan Stafford, Associate Artistic Director Wendy Whelan, and Executive Director Katherine Brown, NYCB is deeply committed to creating and sustaining an organizational culture that values diversity, inclusion, and equity, promoting creative excellence, and nurturing a new generation of dancers and choreographers.

About Lincoln Center for the Performing Arts

Lincoln Center for the Performing Arts is the steward of the world’s leading performing arts center, an artistic and civic cornerstone for New York City comprised of eleven resident companies on a 16-acre campus. The nonprofit’s strategic priorities include: supporting the arts organizations that call Lincoln Center home to realize their missions and fostering opportunities for collaboration across campus; championing inclusion and increasing the accessibility and reach of Lincoln Center’s work; and reimagining and strengthening the performing arts for the 21st century and beyond, helping ensure their rightful place at the center of civic life. LincolnCenter.org.

BAAND Together Dance Festival is made possible by CHANEL. #CHANELandDance

Lincoln Center’s artistic excellence is made possible by the dedication and generosity of our board members.

Operation of Lincoln Center’s public plazas is supported in part with public funds provided by the City of New York.

NewYork-Presbyterian is the Official Hospital of Lincoln Center.