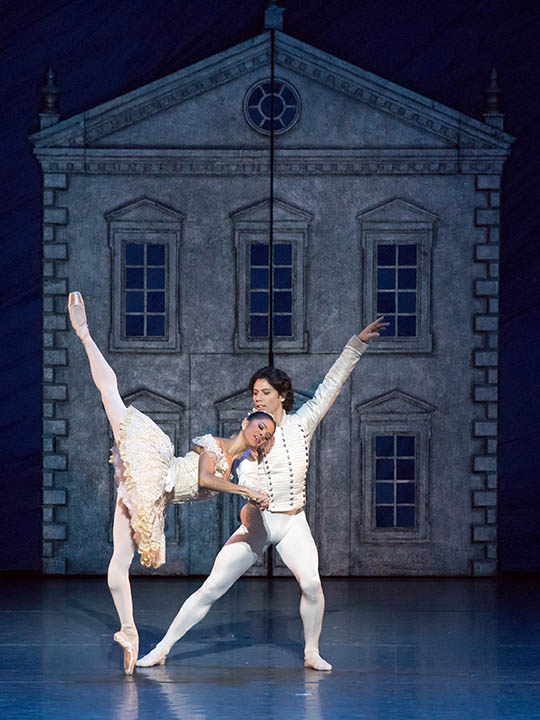 Misty Copeland and Herman Cornejo in The Nutcracker.

COSTA MESA, CA – Casting for American Ballet Theatre’s The Nutcracker, co-presented by Segerstrom Center for the Arts and ABT, was announced today by Kevin McKenzie, ABT Artistic Director and Terry Dwyer, Segerstrom Center President. Choreographed by ABT Artist in Residence Alexei Ratmansky, The Nutcracker will be given 12 performances at Segerstrom Center for the Arts, December 9-18, 2016. The Nutcracker, set to music by Peter Ilyitch Tchaikovsky, features choreography by Alexei Ratmansky, scenery and costumes by award-winning designer Richard Hudson and lighting by Jennifer Tipton. The Pacific Symphony performs the beloved holiday score. In the Los Angeles Times review from last year’s inaugural Center performance, it declared, “Choreographer Alexei Ratmansky has made his own Christmas miracle: a joyful ‘Nutcracker’ ballet that is ravishing and clever enough to inspire multiple viewings.”

Misty Copeland and Herman Cornejo will lead the opening night cast of The Nutcracker dancing the roles of Clara, the Princess and Nutcracker, the Prince, respectively. Subsequent casts include Hee Seo and Cory Stearns, Gillian Murphy and James Whiteside, Isabella Boylston and Jeffrey Cirio, Stella Abrera and Alexandre Hammoudi, and Sarah Lane and Joseph Gorak in the leading roles.

Principal Casting for The Nutcracker at Segerstrom Center the Arts

Artists and program are subject to change.

Single tickets for American Ballet Theatre’s The Nutcracker start at $29 are now available online at SCFTA.org, at the Box Office at 600 Town Center Drive in Costa Mesa or by calling (714) 556-2787. For inquiries about group ticket discounts for 10 or more, call the Group Services office at (714) 755-0236. Special Sweet Seats are available for every performance and include:

Segerstrom Center for the Arts applauds Kia, Official Automotive Partner of the Center, and United Airlines, Official Airline of the Center. The Center’s 2016-2017 International Dance Series is made possible by The Audrey Steele Burnand Endowed Fund for International Dance and The Segerstrom Foundation Endowment for Great Performances. ABT’s The Nutcracker is presented with support from the S. Mark Taper Foundation.

American Ballet Theatre is one of the great dance companies in the world. Few ballet companies equal ABT for its combination of size, scope and outreach. Recognized as a living national treasure since its founding in 1940, ABT annually tours the United States, performing for more than 400,000 people, and is the only major cultural institution to do so.

Over its 75-year history, the Company has appeared in a total of 132 cities in 50 countries and has performed in all 50 states of the United States. ABT has recently enjoyed triumphant successes with engagements in Paris, Brisbane, Abu Dhabi, Beijing, Hong Kong and Tokyo.

Pacific Symphony, led by Music Director Carl St.Clair, is the largest orchestra formed in the United States in the last 50 years, and is recognized as an outstanding ensemble making strides on both the national and international scene as well as in its own community of Orange County, Calif. Pacific Symphony offers moving musical experiences with repertoire ranging from the great orchestral masterworks to music from today’s most prominent composers, highlighted by the annual American Composers Festival. Pacific Symphony is dedicated to developing and promoting today’s composers and expanding the orchestral repertoire – illustrated through its many commissions and recordings, in-depth explorations of American artists and themes. The Symphony’s innovative approaches to new works received the ASCAP Award for Adventurous Programming in 2005 and 2010. In 2010, Pacific Symphony was named one of five orchestras profiled by the League of American Orchestras in a study on innovation. Since 2006, the Symphony has performed in the Renée and Henry Segerstrom Concert Hall, designed by Cesar Pelli with acoustics by Russell Johnson. In March 2006, the Symphony embarked on its first European tour – receiving an unprecedented 22 rave reviews.

Segerstrom Center for the Arts is an acclaimed arts institution as well as a beautiful multi-disciplinary cultural campus. It is committed to supporting artistic excellence on all of its stages, offering unsurpassed experiences, and to engaging the entire community in new and exciting ways through the unique power of live performance and a diverse array of inspiring programs.

The Center presents a broad range of programming for audiences of all ages, including international ballet and dance, national tours of top Broadway shows, intimate performances of jazz and cabaret, contemporary artists, classical music performed by renowned chamber orchestras and ensembles, family-friendly programming, free performances open to the public from outdoor movie screenings to dancing on the plaza and many other special events.

The Center’s education programs are designed to inspire young people through the arts and reach hundreds of thousands of students each year. In addition to the presenting and producing institution Segerstrom Center for the Arts, the 14-acre campus also embraces the facilities of two independently acclaimed organizations: Tony Award®-winning South Coast Repertory and a site designated as the future home of the Orange County Museum of Art.

The Nutcracker choreographed by Alexei Ratmansky, set to a score by Peter Ilyich Tchaikovsky, performed live by Pacific Symphony.