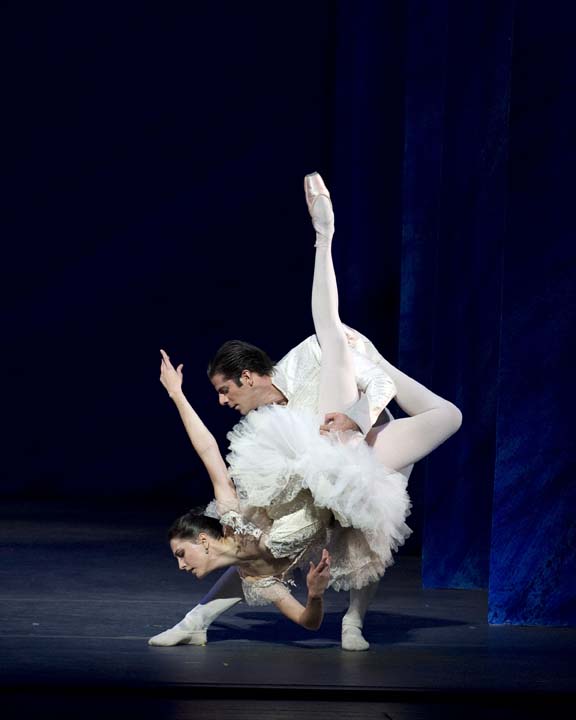 Veronika Part and Marcelo Gomes in The Nutcracker.

COSTA MESA, CA – Casting for American Ballet Theatre’s The Nutcracker, co-presented by Segerstrom Center for the Arts and ABT, was announced today by Kevin McKenzie, ABT Artistic Director. Choreographed by ABT Artist in Residence Alexei Ratmansky, The Nutcracker will be given 14 performances at Segerstrom Center for the Arts, December 10-20, 2015.

Principal Casting for The Nutcracker at Segerstrom Center the Arts

Artists and program are subject to change.

The Nutcracker, set to a score by Peter Ilyitch Tchaikovsky, features choreography by Alexei Ratmansky, scenery and costumes by Richard Hudson and lighting by Jennifer Tipton. This production was given its World Premiere at the Brooklyn Academy of Music (BAM) Howard Gilman Opera House on December 23, 2010, led by Gillian Murphy as Clara, the Princess and David Hallberg as Nutcracker, the Prince.

Center President Terrence W. Dwyer said, “We are so pleased to introduce a new Orange County holiday tradition by presenting American Ballet Theatre’s prestigious and acclaimed production of The Nutcracker. This ballet holds a very special place in the hearts and memories of audiences and will continue to inspire a new generation of dance fans. And we are especially thrilled that students from our ABT William J. Gillespie School will share the stage with the celebrated ABT dancers.”

The engagement of The Nutcracker continues an on-going relationship between Segerstrom Center and American Ballet Theatre. The company has appeared at the Center 23 times, beginning in 1987. At the Center, ABT gave the world premiere of Mikhail Baryshnikov’s Swan Lake in 1988, the West Coast premiere of Kevin McKenzie’s new production of The Sleeping Beauty in 2007 and the world premiere of a new production of Firebird by Alexei Ratmansky in 2012. In 2008, the Center and ABT co-commissioned Twyla Tharp¹s Rabbit and Rogue, receiving its world premiere in New York and West Coast premiere at the Center. In 1999, the ABT production of Le Corsaire was taped in Segerstrom Hall for broadcast on PBS’ Dance In America, winning an Emmy Award. In 2003, The Dream was also taped at the Center for broadcast on Dance In America.

Tickets for American Ballet Theatre’s The Nutcracker start at $29 and will go on sale Sunday, September 13 at 10 a.m. PT. Tickets will be available online at SCFTA.org, at the Box Office at 600 Town Center Drive in Costa Mesa or by calling (714) 556-2787. The TTY number is (714) 556-2746. Free Preview Talks will be conducted by Elizabeth Kaye one hour prior to each performance. Artists and program are subject to change.

American Ballet Theatre is one of the great dance companies in the world. Few ballet companies equal ABT for its combination of size, scope and outreach. Recognized as a living national treasure since its founding in 1940, ABT annually tours the United States, performing for more than 400,000 people, and is the only major cultural institution to do so.

Over its 75-year history, the Company has appeared in a total of 132 cities in 50 countries and has performed in all 50 states of the United States. ABT has recently enjoyed triumphant successes with engagements in Brisbane, Abu Dhabi, Beijing, Hong Kong and Tokyo.

Pacific Symphony, led by Music Director Carl St.Clair, is the largest orchestra formed in the United States in the last 50 years, and is recognized as an outstanding ensemble making strides on both the national and international scene as well as in its own community of Orange County, Calif. Pacific Symphony offers moving musical experiences with repertoire ranging from the great orchestral masterworks to music from today’s most prominent composers, highlighted by the annual American Composers Festival and a series of multi-media concerts called “Music Unwound.” Pacific Symphony is dedicated to developing and promoting today’s composers and expanding the orchestral repertoire – illustrated through its many commissions and recordings, in-depth explorations of American artists and themes. The Symphony’s innovative approaches to new works received the ASCAP Award for Adventurous Programming in 2005 and 2010. In 2010, Pacific Symphony was named one of five orchestras profiled by the League of American Orchestras in a study on innovation. Since 2006, the Symphony has performed in the Renée and Henry Segerstrom Concert Hall, designed by Cesar Pelli with acoustics by Russell Johnson. In March 2006, the Symphony embarked on its first European tour – receiving an unprecedented 22 rave reviews.

Segerstrom Center for the Arts is unique as both an acclaimed arts institution and as a multi-disciplinary cultural campus. It is committed to supporting artistic excellence on all of its stages, offering unsurpassed experiences, and engaging the entire community in new and exciting ways through the unique power of live performance and a diverse array of inspiring programs.

The Center presents a broad range of programming for audiences of all ages, including international ballet and dance, national tours of top Broadway shows, intimate performances of jazz and cabaret, contemporary artists, classical music performed by renowned chamber orchestras and ensembles, family-friendly programming, free performances open to the public from outdoor movie screenings to dancing on the plaza and many other special events. The Center’s arts-in-education programs are designed to inspire young people through the arts and reach hundreds of thousands of students each year.

In addition to the presenting and producing institution Segerstrom Center for the Arts, the 14-acre campus also embraces the facilities of two independent acclaimed organizations: Tony Award®-winning South Coast Repertory and a site designated as the future home of the Orange County Museum of Art.

The Nutcracker choreographed by Alexei Ratmansky, set to a score by Peter Ilyich Tchaikovsky, performed live by Pacific Symphony.

Free Preview Talks will be conducted by Elizabeth Kaye one hour prior to each performance.

In person – The Box Office