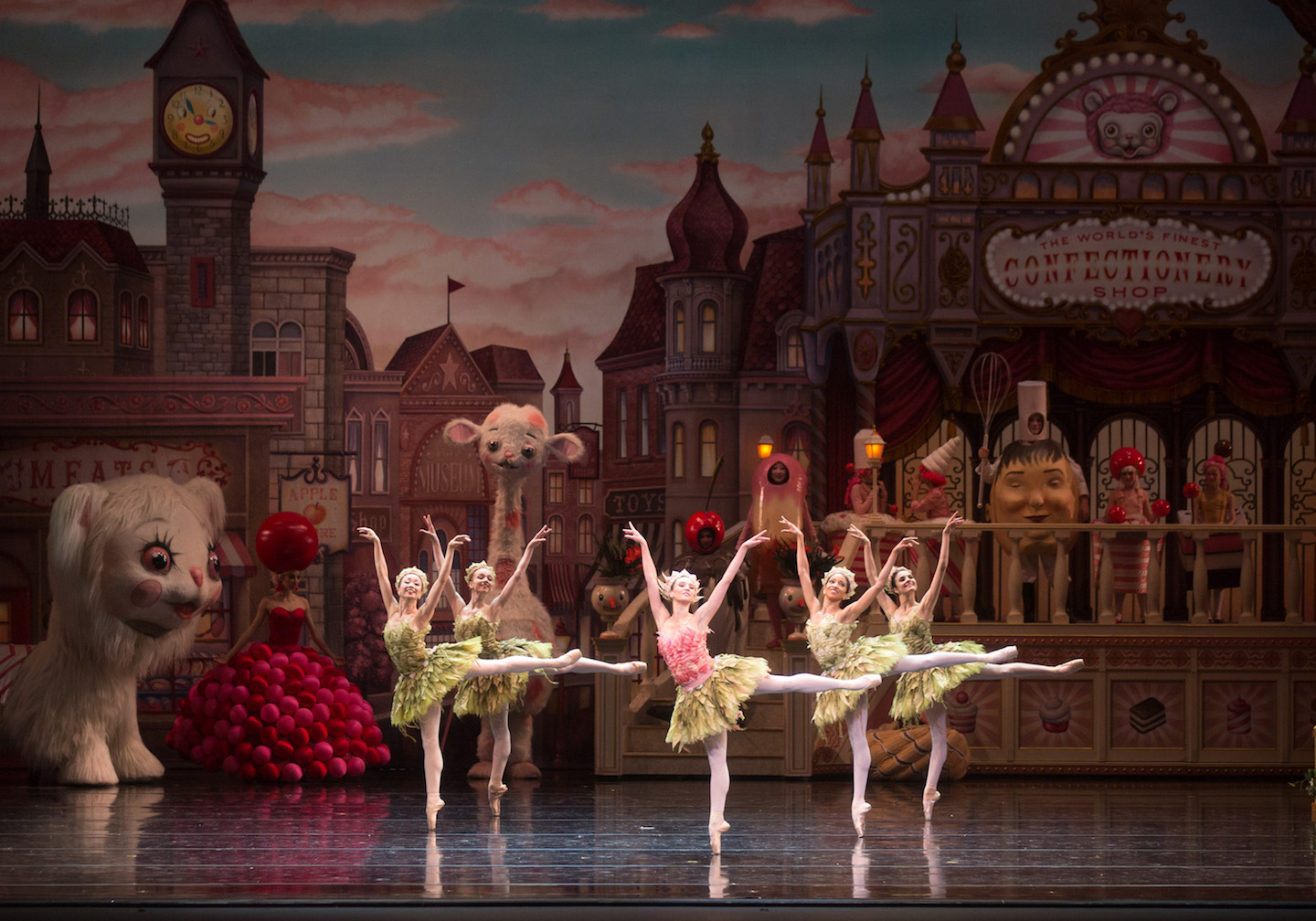 Choreographed by ABT Artist in Residence Alexei Ratmansky, the ballet features scenery and costumes by artist Mark Ryden and lighting by Brad Fields. Whipped Cream, with a libretto and score by Richard Strauss, is based on the two-act ballet originally created as Schlagobers, which premiered at the Vienna State Opera in 1924. Ratmansky’s production received its World Premiere by ABT on March 15, 2017 at Segerstrom Center for the Arts in Costa Mesa, California danced by Daniil Simkin (The Boy), Stella Abrera (Princess Tea Flower), David Hallberg (Prince Coffee), and Sarah Lane (Princess Praline). Whipped Cream will be given five performances through Sunday, October 23.

ABT’s Fall season continues Wednesday evening, October 26 with the Company return of Frederick Ashton’s The Dream, led by Gillian Murphy as Titania, Cory Stearns as Oberon, and Herman Cornejo as Puck. The roles of Titania and Oberon will be danced for the first time by Cassandra Trenary and Daniel Camargo on Saturday evening, October 29 at 8:00 P.M.

The Dream received its World Premiere by The Royal Ballet at the Royal Opera House, Covent Garden, London on April 2, 1964, danced by Antoinette Sibley as Titania, Anthony Dowell as Oberon, and Keith Martin as Puck. American Ballet Theatre’s first-ever performance of The Dream was at the Metropolitan Opera House, New York on May 24, 2002, danced by Alessandra Ferri as Titania, Ethan Stiefel as Oberon, and Herman Cornejo as Puck. ABT last performed The Dream in 2014.

Alexei Ratmansky’s The Seasons will also return on the evening of Wednesday, October 26, featuring Isabella Boylston and Thomas Forster in the central roles. Hee Seo and Joo Won Ahn will make their debuts in the leading roles on Saturday, October 29. Please see the attached grid for additional principal casting.

Set to a score of the same name by Alexander Glazunov, The Seasons features costumes by Robert Perdziola and lighting by Mark Stanley. Created to commemorate Ratmansky’s 10th anniversary as ABT Artist in Residence, the ballet received its World Premiere on May 20, 2019 at the Metropolitan Opera House.

The 2022 Fall Gala performance on Thursday, October 27 will be highlighted by the World Premiere of Lifted by Christopher Rudd. Designed to highlight, amplify, and celebrate Black creative voices, Lifted will be performed by Erica Lall, Courtney Lavine, Calvin Royal III, Gabe Stone Shayer, Jose Sebastian, and Melvin Lawovi. The ballet will be set to music by Kennedy Center Composer-in-Residence Carlos Simon, with Roderick Cox making his debut as Guest Conductor with ABT. The work will feature costumes by New York-based creative director and fashion designer Carly Cushnie, sets by Carlos Soto, lighting by Alan Edwards, and dramaturgy by Phaedra Scott. Sarah Lozoff will serve as Intimacy Director.

The Fall Gala program will also highlight the Company in Sinfonietta, featuring many of ABT’s Principal Dancers and Soloists. Jiří Kylián’s Sinfonietta is set to music by Leoš Janáček, and features scenery and costumes by Walter Nobbe and lighting by Kees Tjebbes. The ballet was given its World Premiere in Charleston, South Carolina by the Nederlands Dans Theater on June 9, 1978, and received its ABT Premiere at The John F. Kennedy Center for the Performing Arts in Washington, D.C. on January 25, 1991. Sinfonietta will be staged for ABT by Roslyn Anderson and Glenn Edgerton.

Jessica Lang’s Children’s Songs Dance will feature performances by some of the newest members of the Company on Friday evening, October 28 and Saturday matinee, October 29. Set to selections from Children’s Songs by the late American jazz composer Chick Corea, the ballet was created on ABT Studio Company in January 2020 during a residency at The Pocantico Center in Tarrytown, New York. The work was first seen on screen as part of the ABT Studio Company Spring Festival, a program of filmed performances that aired online in June 2021. The ballet received its main Company Premiere on August 9, 2022 as part of Lincoln Center’s BAAND Together Dance Festival. This production of Children’s Songs Dance for the 2022 Fall season will feature new costumes by Jillian Lewis and lighting by Nicole Pearce.

Tickets for American Ballet Theatre’s 2022 Fall season, starting at $30, are available beginning Tuesday, September 6 at 12:00 Noon in person at the Koch Theater box office, by phone by calling 212-496-0600, and online. During the 2022 Fall season, ABT will offer audience members the opportunity to exchange their tickets or receive refunds free of charge up until Noon on the day of performance. Based on CDC and New York State guidelines at the time of performance, entry requirements for both adults and children may include valid proof of vaccination with a CDC approved COVID vaccine, mask usage, and more.

Leadership support for Whipped Cream and The Seasons, part of The Ratmansky Project, has been generously provided by Avery and Andrew F. Barth, the Blavatnik Family Foundation, Mr. and Mrs. Hamilton E. James, the Lloyd E. Rigler – Lawrence E. Deutsch Foundation, The Ted and Mary Jo Shen Charitable Gift Fund, and through an endowed gift from the Toni and Martin Sosnoff New Works Fund.

This production of The Dream is generously supported through an endowed gift from Anka Palitz, in memory of Clarence J. Palitz, Jr.

Children’s Songs Dance was commissioned by ABT Studio Company with leadership support from The Rockefeller Brothers Fund. It was created in a residency at The Pocantico Center in Tarrytown, NY. 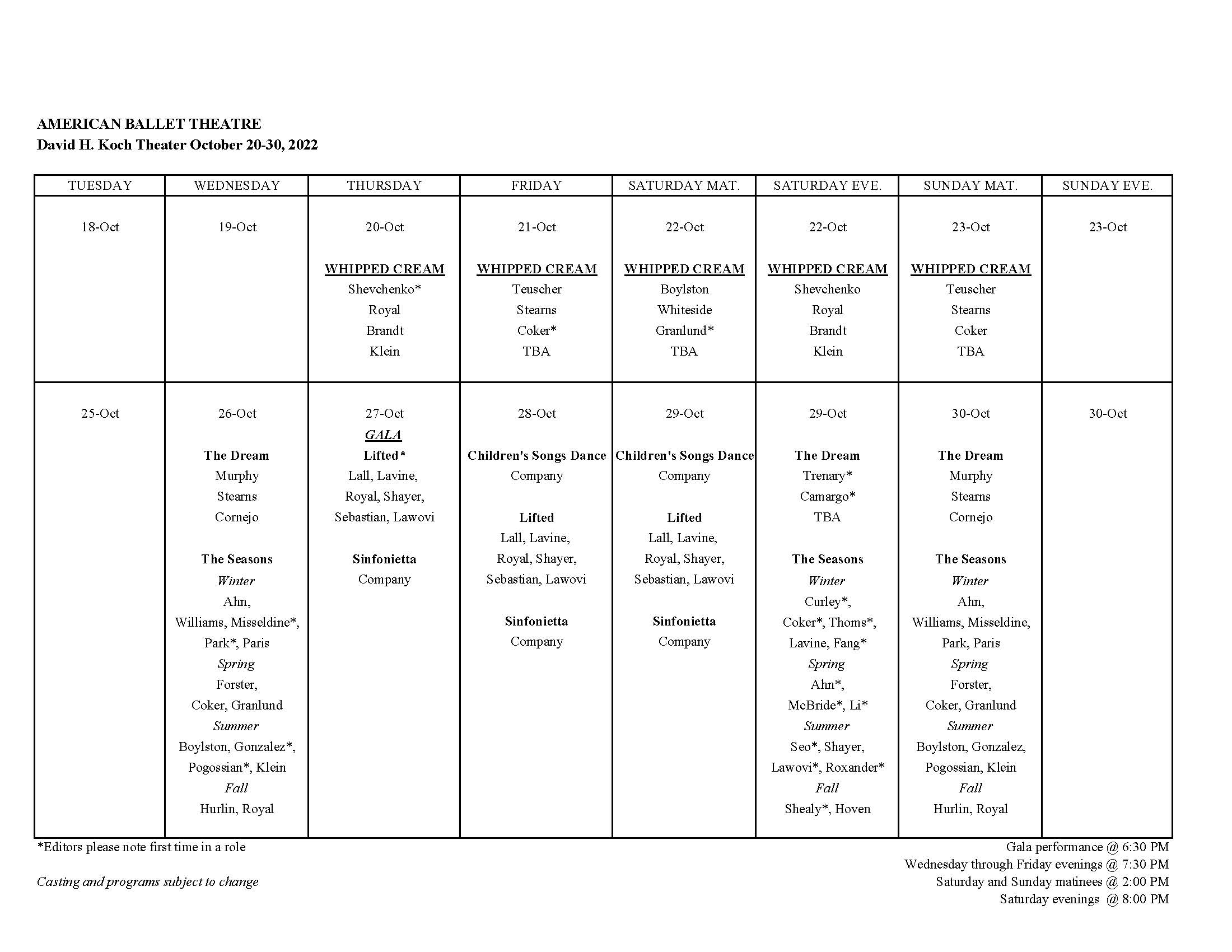