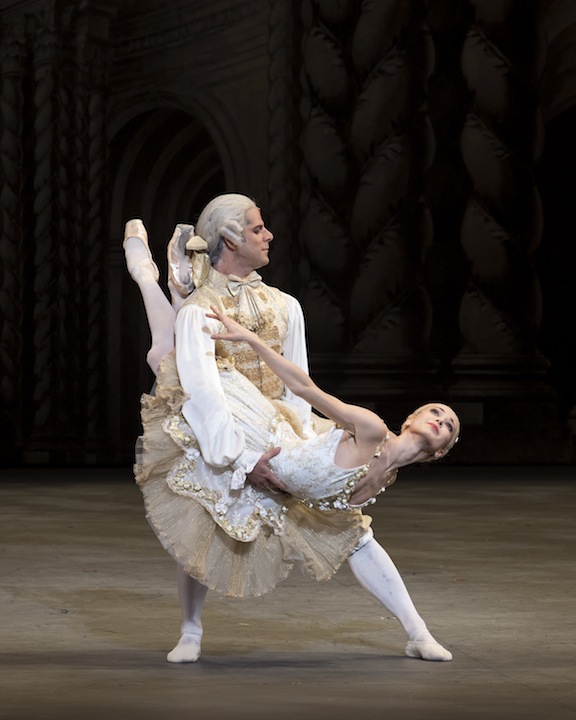 Diana Vishneva and Marcelo Gomes in The Sleeping Beauty.

Casting for the fifth and sixth weeks of American Ballet Theatre’s 2015 Spring Season at the Metropolitan Opera House was announced today by Artistic Director Kevin McKenzie.

The fifth week features eight performances of the all-new production of The Sleeping Beauty, June 8-13. Monday night’s performance, June 8, will be led by Diana Vishneva as Princess Aurora, Marcelo Gomes as Prince Désiré, Veronika Part as the Lilac Fairy, Nancy Raffa as Carabosse, Isabella Boylston as Diamond Fairy, Daniil Simkin as the Bluebird and Cassandra Trenary as Princess Florine. Set to the classic score by Peter Ilyitch Tchaikovsky, with choreography by Marius Petipa and staging and additional choreography by Alexei Ratmansky, The Sleeping Beauty received its World Premiere on March 3, 2015 at the Segerstrom Center for the Arts in Costa Mesa, California. This production features scenery and costumes by Tony Award®-winning designer Richard Hudson and lighting by James F. Ingalls. This is American Ballet Theatre’s fourth production of the full-length ballet.

The season’s first performance of Kenneth MacMillan’s Romeo and Juliet, on Monday, June 15, will be led by Hee Seo as Juliet, Cory Stearns as Romeo and Daniil Simkin in his debut as Mercutio. Guest Artist Evgenia Obraztsova will make her ABT debut in the role of Juliet opposite Herman Cornejo as Romeo on Thursday, June 18. Joseph Gorak and Misty Copeland will debut in the roles of Romeo and Juliet, respectively, at the matinee on Saturday, June 20. On Saturday evening, June 20, Julie Kent will dance her final performance with American Ballet Theatre in the role of Juliet opposite Roberto Bolle as Romeo. Set to the score by Sergei Prokofiev, Romeo and Juliet features scenery and costumes by Nicholas Georgiadis and lighting by Thomas Skelton. The ballet received its World Premiere by The Royal Ballet in London on February 9, 1965 and was given its ABT Company Premiere at the Kennedy Center for the Performing Arts in Washington, D.C. on January 3, 1985 with Leslie Browne and Robert LaFosse in the leading roles.

ABT gratefully acknowledges Lead Sponsor of The Sleeping Beauty, David H. Koch.  Additional leadership support is generously provided by the Lloyd E. Rigler – Lawrence E. Deutsch Foundation.  ABT gratefully acknowledges Linda Allard for her generous support of costumes for The Sleeping Beauty.  Additional support is generously provided by Avery and Andrew F. Barth, The Susan and Leonard Feinstein Foundation, Caroline and Edward Hyman, Howard S. Paley, Linda and Martin Fell, Mr. and Mrs. Austin T. Fragomen, The Ted and Mary Jo Shen Charitable Gift Fund, and Michael and Sue Steinberg.  Support has also been provided by the National Endowment for the Arts.  This production is generously supported through an endowed gift from The Toni and Martin Sosnoff New Works Fund. This production of The Sleeping Beauty is a co-production with Teatro alla Scala.

The 75th Anniversary Season performances of Romeo and Juliet are generously underwritten by an anonymous donor in honor of Julie Kent.

++Editors please note first time in a role with ABT
Thurs. Eve., June 18 – Obraztsova (Juliet) in Romeo and Juliet