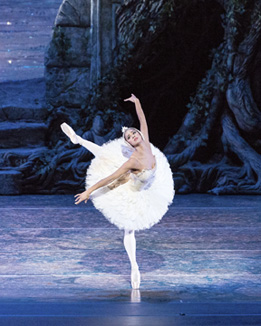 Casting for the seventh and eighth weeks of American Ballet Theatre’s 2015 Spring Season at the Metropolitan Opera House was announced today by Artistic Director Kevin McKenzie.

The seventh week will feature eight performances of Swan Lake, June 22-27. Monday night’s performance, June 22, will be led by Gillian Murphy as Odette/Odile opposite Marcelo Gomes as Prince Siegfried and Cory Stearns as von Rothbart. On Tuesday, June 23, Thomas Forster will make his New York debut as von Rothbart. Misty Copeland will make her New York debut in the role of Odette/Odile at the matinee on Wednesday, June 24, opposite James Whiteside as Prince Siegfried and Alexandre Hammoudi as von Rothbart. Alexandre Hammoudi and Sterling Baca will make their New York debut’s in the roles of Prince Siegfried and von Rothbart, respectively, on Thursday, June 25, with Gillian Murphy as Odette/Odile. This production features choreography by Kevin McKenzie after Marius Petipa and Lev Ivanov and is set to the score by Peter Ilyitch Tchaikovsky. The first production of Swan Lake, with choreography by Julius (Wentzel) Reisinger, received its World Premiere by the Russian Imperial Ballet at the Bolshoi Theatre, Moscow on March 4, 1877. Swan Lake as we know it, with the Petipa/Ivanov choreography, was given its first full‑length production at the Mariinsky Theatre, St. Petersburg, on January 27, 1895. This production of Swan Lake, featuring scenery and costumes by Zack Brown and lighting by Duane Schuler, premiered on March 24, 2000 at the Kennedy Center for the Performing Arts in Washington, D.C. with Julie Kent (Odette-Odile), Angel Corella (Prince Siegfried) and Marcelo Gomes (von Rothbart).

American Ballet Theatre’s 2015 Spring Season will conclude with eight performances of Frederick Ashton’s Cinderella, June 29 – July 4. Monday evening’s performance will be led by Hee Seo as Cinderella and Cory Stearns in his New York debut as The Prince. On Tuesday, June 30, Alexandre Hammoudi will debut as The Prince with Gillian Murphy as Cinderella and Isabella Boylston in her New York debut as The Fairy Godmother. On Wednesday matinee, July 1, Stella Abrera will make her debut in the role of Cinderella with Joseph Gorak as The Prince. On Thursday, July 2, Guest Artist Marianela Nuñez will make her ABT debut in the role of Cinderella opposite James Whiteside as The Prince. Set to the score by Sergei Prokofiev, Cinderella features sets and costumes by David Walker. The ballet received its World Premiere by Sadler’s Wells Ballet on December 23, 1948 at London’s Royal Opera House with Moira Shearer as Cinderella, Michael Somes as The Prince, Frederick Ashton and Robert Helpmann as the Stepsisters and Alexander Grant as the Jester. The ballet received its ABT Company Premiere on June 9, 2014 led by Hee Seo (Cinderella) and James Whiteside (The Prince). Cinderella was directed, supervised and staged by Wendy Ellis Somes and Malin Thoors.