Gillian Murphy and Marcelo Gomes to Lead New York Premiere of All-New Production of The Sleeping Beauty on Friday, May 29

Kimin Kim and Leonid Sarafanov to Debut as Guest Artists 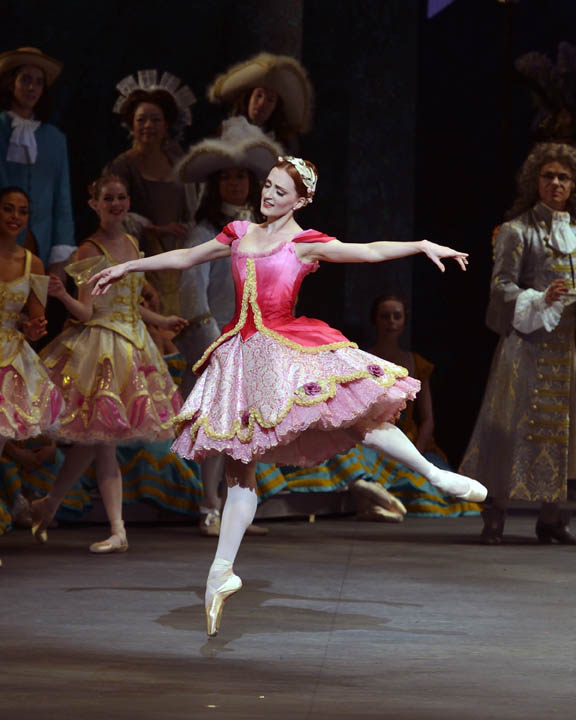 Gillian Murphy in The Sleeping Beauty.

Casting for the third and fourth weeks of American Ballet Theatre’s 2015 Spring Season at the Metropolitan Opera House was announced today by Artistic Director Kevin McKenzie.

The third week will feature five performances of Giselle, May 25-28. Monday night’s performance, May 25, will be led by Julie Kent in the title role opposite Roberto Bolle as Albrecht and Gillian Murphy as Myrta. Guest Artist Steven McRae will make his ABT debut in the role of Albrecht on Thursday, May 28 opposite Guest Artist Natalia Osipova as Giselle and Veronika Part as Myrta. On Wednesday, May 27, Paloma Herrera will dance her final performance with American Ballet Theatre in the title role at the matinee, and Xiomara Reyes will have her ABT farewell at the evening performance, also in the title role. Set to music by Adolphe Adam, with scenery by Gianni Quaranta, costumes by Anna Anni and lighting by Jennifer Tipton, Giselle features choreography after Jean Coralli, Jules Perrot and Marius Petipa and has been staged for ABT by Artistic Director Kevin McKenzie.  The world premiere of Giselle, one of the oldest continually‑performed ballets, occurred at the Theatre de l’Academie Royale de Musique in Paris on June 28, 1841.  The ballet was first presented by ABT (then Ballet Theatre) at the Center Theatre in New York City on January 12, 1940 with choreography by Anton Dolin and scenery and costumes by Lucinda Ballard.  The leading roles were danced by Annabelle Lyon and Anton Dolin.  American Ballet Theatre’s sixth production, featuring scenery by Gianni Quaranta and costumes by Anna Anni, was created for the film Dancers, produced in 1987 by Cannon Films.  This production’s first public performance was given on March 20, 1987 at the Shrine Auditorium in Los Angeles, California, with Marianna Tcherkassky as Giselle and Kevin McKenzie as Albrecht.  The current staging is by McKenzie, using the Quaranta and Anni designs.

The New York Premiere of Alexei Ratmansky’s The Sleeping Beauty will take place on Friday evening, May 29 led by Gillian Murphy as Princess Aurora, Marcelo Gomes as Prince Désiré, Stella Abrera as the Lilac Fairy, Craig Salstein as Carabosse, Isabella Boylston as the Diamond Fairy, Daniil Simkin as the Bluebird and Cassandra Trenary as Princess Florine. Sarah Lane and Herman Cornejo will debut in the roles of Princess Aurora and Prince Désiré, respectively, on Saturday afternoon, May 30. This all-new production set to the classic score by Peter Ilyitch Tchaikovsky, with choreography by Marius Petipa and staging and additional choreography by Alexei Ratmansky, received its World Premiere on March 3, 2015 at the Segerstrom Center for the Arts in Costa Mesa, California. The Sleeping Beauty features scenery and costumes by Tony Award®-winning designer Richard Hudson and lighting by James F. Ingalls.  Hudson’s designs are based on the historic work of Léon Bakst, who created a seminal version of The Sleeping Beauty for Serge Diaghilev’s Ballets Russes in 1921. This is American Ballet Theatre’s fourth production of the full-length ballet.  The Sleeping Beauty received its World Premiere by the Imperial Ballet at the Mariinsky Theatre, St. Petersburg on January 15, 1890.  ABT presented its first full-length production of the ballet with choreography by Mary Skeaping from the original of Marius Petipa and the staging of Nicholas Sergeyev, at the Metropolitan Opera House, New York, on June 15, 1976.  The Sleeping Beauty, with choreography after Petipa and staging and additional choreography by Kenneth MacMillan, received its World Premiere by American Ballet Theatre at the Auditorium Theatre, Chicago, Illinois, on February 11, 1987.  A new production, with choreography after Petipa and additional choreography and staging by Kevin McKenzie, Gelsey Kirkland and Michael Chernov received its World Premiere at the Metropolitan Opera House on June 1, 2007.

The first of eight performances of La Bayadère begin Monday, June 1 featuring Guest Artist Kimin Kim in his ABT debut as Solor opposite Hee Seo as Nikya and Gillian Murphy as Gamzatti. Guest Artist Maria Kochetkova will make her ABT debut in the role of Nikiya on Tuesday evening, June 2 opposite Herman Cornejo as Solor and Misty Copeland as Gamzatti. Guest Artist Leonid Sarafanov will debut with ABT on Wednesday evening, June 3 in the role of Solor opposite Guest Artist Natalia Osipova in her ABT debut as Nikiya with Isabella Boylston in the role of Gamzatti. Choreographed by Natalia Makarova after Marius Petipa, La Bayadère is set to music by Ludwig Minkus, specially arranged by John Lanchbery, and features scenery by PierLuigi Samaritani, costumes by Theoni V. Aldredge and lighting by Toshiro Ogawa.  The full‑length La Bayadère received its World Premiere by the Imperial Ballet at the Bolshoi Kamenny in St. Petersburg on February 4, 1877.  La Bayadère, Act II (The Kingdom of the Shades) was first performed in the West by the Leningrad‑Kirov Ballet in 196l.  Natalia Makarova first staged The Kingdom of the Shades scene for American Ballet Theatre in 1974 and it received its premiere at the State Theater in New York City on July 3 of that year, danced by Cynthia Gregory as Nikiya and Ivan Nagy as Solor. Makarova subsequently produced and choreographed the complete version of La Bayadère (in three acts) for American Ballet Theatre, which received its World Premiere on May 21, 1980 with Natalia Makarova as Nikiya, Anthony Dowell as Solor and Cynthia Harvey as Gamzatti. American Airlines is the Official Airline of American Ballet Theatre.  Northern Trust is the Leading Corporate Sponsor of the American Ballet Theatre Jacqueline Kennedy Onassis School.  ABT is supported, in part, with public funds from the National Endowment for the Arts; the New York State Council on the Arts with the support of Governor Andrew Cuomo and the New York State Legislature; and the New York City Department of Cultural Affairs, in partnership with the City Council.

ABT gratefully acknowledges Lead Sponsor of The Sleeping Beauty, David H. Koch.  Additional leadership support is generously provided by the Lloyd E. Rigler – Lawrence E. Deutsch Foundation.  ABT gratefully acknowledges Linda Allard for her generous support of costumes for The Sleeping Beauty.  Additional support is generously provided by Avery and Andrew F. Barth, The Susan and Leonard Feinstein Foundation, Caroline and Edward Hyman, Howard S. Paley, Linda and Martin Fell, Mr. and Mrs. Austin T. Fragomen, The Ted and Mary Jo Shen Charitable Gift Fund, and Michael and Sue Steinberg.  Support has also been provided by the National Endowment for the Arts.  This production is generously supported through an endowed gift from The Toni and Martin Sosnoff New Works Fund. This production of The Sleeping Beauty is a co-production with Teatro alla Scala.

La Bayadère is generously sponsored by an endowed gift from Drs. Philip and Marjorie Gerdine. La Bayadère is presented in loving memory of Mrs. Caroline Newhouse.  A generous grant from the Rockefeller Foundation has made this production possible. Major funding for this production has been provided by the National Endowment for the Arts