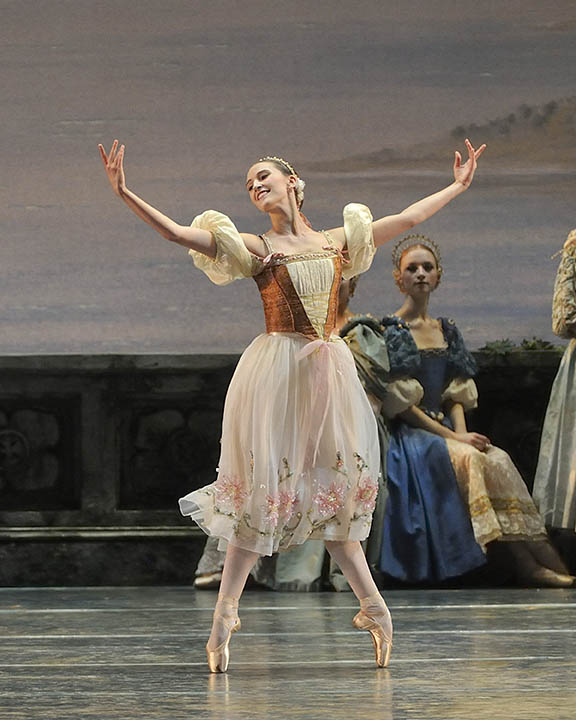 To encourage the personal and artistic development of young artists, the one-year Leonore Annenberg Arts Fellowship will provide funds to cover training and expenses outside of ABT’s regular season, such as guest coaches/teachers, master teachers, a physical therapist/trainer, specialty teachers to explore artistic areas outside of dance, pianists and studio space, as well as college courses and business/entrepreneurial interests.

Devon Teuscher was born in Pennsylvania and began her dance training at the age of nine under Deanna Doty of the Champaign Urbana Ballet Academy in Champaign, Illinois. She continued her training at the Vermont Ballet Theatre School under the direction of Alex and Kirsten Nagiba. She attended summer intensives at The Kirov Ballet Academy, Pacific Northwest Ballet and American Ballet Theatre on scholarship.  In 2005, Teuscher began training at the ABT Jacqueline Kennedy Onassis School on full scholarship.

Teuscher joined the ABT Studio Company in 2006, the main Company as an apprentice in 2007 and the corps de ballet in 2008.  She was promoted to Soloist in 2014.  Her repertoire with the Company includes Polyhymnia in Apollo, a Shade in La Bayadère, the Fairy Godmother in Frederick Ashton’s Cinderella, a flower girl in Don Quixote, Myrta in Giselle, Caroline in Jardin aux Lilas, Hagar in Pillar of Fire, the Lilac Fairy in The Sleeping Beauty, the pas de trois and a big swan in Swan Lake, Diana in Sylvia and roles in Airs, Bach Partita, Baker’s Dozen, Citizen, Company B, Duets, Dumbarton, Everything Doesn’t Happen at Once, Gong, In the Upper Room, Thirteen Diversions, Valse Fantaisie and With a Chance of Rain.  Teuscher created the Fairy Candide (Sincerity) in Alexei Ratmansky’s The Sleeping Beauty and a role in Mark Morris’ After You.

The Leonore Annenberg Fellowship Fund for the Performing and Visual Arts is a project of the Annenberg Public Policy Center at the University of Pennsylvania.  Leonore Annenberg (1918-2009) served as U.S. Chief of Protocol during the first term of President Ronald Reagan.  Her philanthropic work focused on education, the arts and civic affairs.  Visit www.leonoreannenbergscholarships.org for more information.