Diana Vishneva to Give Final Performances with ABT 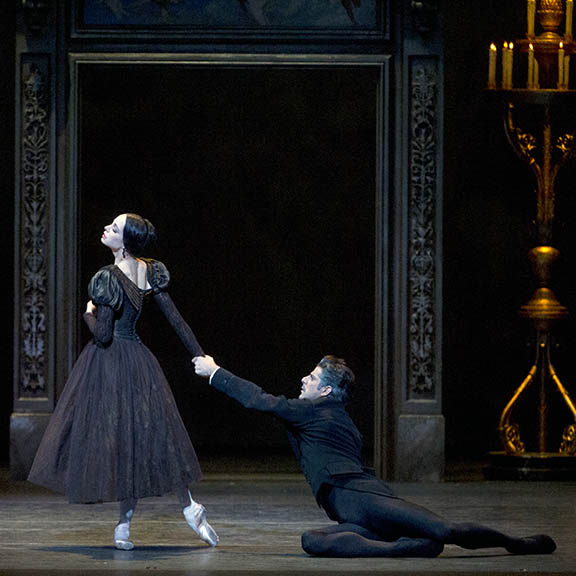 Diana Vishneva, a Principal Dancer with American Ballet Theatre since 2005, will give her final performances with the Company during the 2017 Spring season at the Metropolitan Opera House.  She will dance the role of Tatiana in Onegin on Monday, June 19 and at her farewell performance on Friday, June 23.

Born in St. Petersburg, Russia, Diana Vishneva graduated from the Vaganova Ballet Academy, joined the Mariinsky Theatre Ballet in 1995 and was promoted to principal in 1996. Her repertoire with the Marriinsky includes the title roles in Giselle and Manon, Kitri in Don Quixote, Masha in The Nutcracker, Nikiya in La Bayadère, Juliet in Romeo and Juliet, Princess Aurora in The Sleeping Beauty, Gulnare in Le Corsaire, the third movement in Symphony in C, Terpsichore in Apollo, Rubies in Jewels, Tchaikovsky Pas de Deux and Grand Pas Classique, among others.

Vishneva has performed as a guest artist with companies around the world, including Bayerische Staatsballett, Teatro alla Scala, the Bolshoi Ballet, Paris Opera Ballet and Staatsballett Berlin.  She has been featured in the programs Diana Vishneva: Beauty in Motion (2009) and Diana Vishneva: Dialogues (2011).

Vishneva made her first appearance with American Ballet Theatre during the Company’s 2003 Spring season dancing Juliet in Romeo and Juliet and she joined ABT as a Principal Dancer in 2005.  Her repertory with the Company includes a leading role in Ballet Imperial, Nikiya in La Bayadère, Kitri in Don Quixote, Titania in The Dream,

Giselle in Giselle, Marguerite Gautier in Lady of the Camellias, Manon in Manon, Nuages, Tatiana in Onegin, Olga in On the Dnieper, Odette-Odile in Swan Lake, the Sylph in La Sylphide, Sylvia in Sylvia, Tchaikovsky Pas de Deux and Thaïs Pas de Deux.  She created Princess Aurora in Alexei Ratmansky’s The Sleeping Beauty and a leading role in Alexei Ratmansky’s Piano Concerto #1.

Vishneva will dance opposite Marcelo Gomes in the role of Eugene Onegin on Monday, June 19 and for her farewell performance on Friday, June 23.