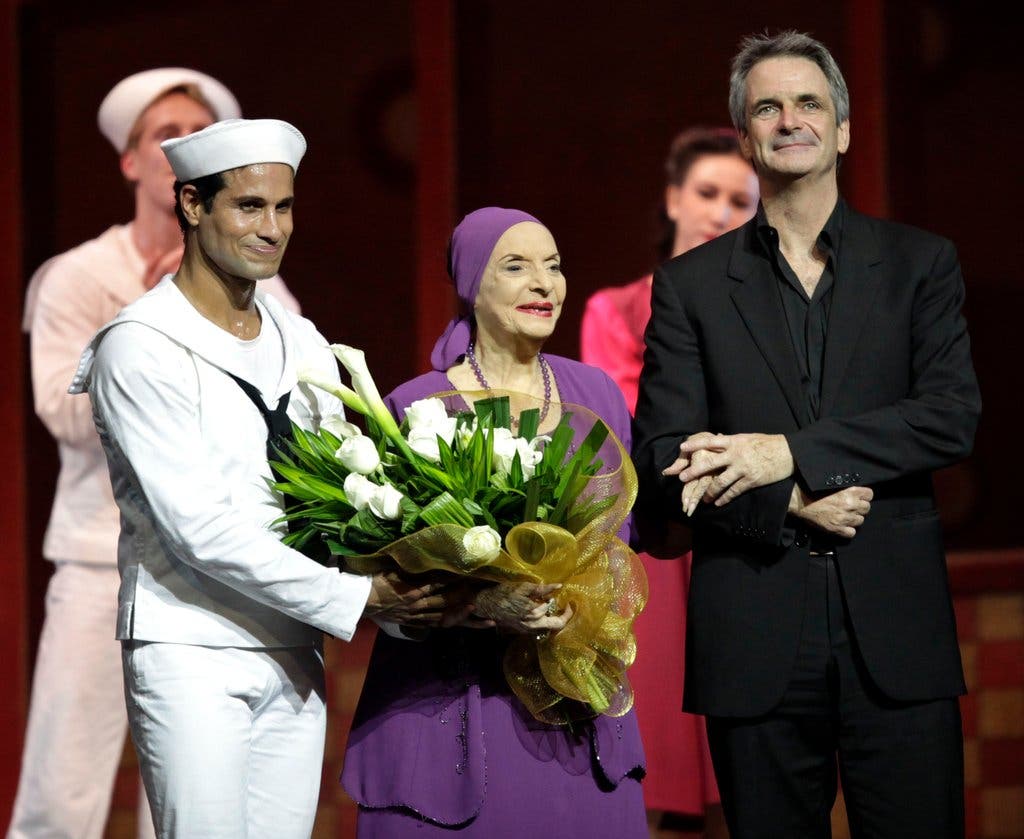 ABT made history in 2010 with its triumphant tour to Cuba, breaking a 50-year cultural embargo between the two nations.

"The tour was a reminder that there is much to communicate through the universal language of art."

A national treasure not only in her own country, but around the world, Cuban ballerina Alicia Alonso began her career as one of the inaugural members of Ballet Theatre in 1940. No one could have known back then, but the budding star would go on to be a household name for more than just her dancing.

After returning to Cuba for a few years to recover from extensive eye surgery, Alonso headed back to New York, rejoined Ballet Theatre in 1943, and shot to stardom when she stepped into the role of Giselle, replacing the injured Alicia Markova.

The stunning dancer was promoted to Principal Dancer in 1946, and in 1948, when Ballet Theatre hit a financial crisis, she left New York and returned to Cuba to develop her own company, the Alicia Alonso Ballet Company.

When Fidel Castro came to power in Cuba in 1959, he turned Alonso’s company into the National Ballet of Cuba (Ballet Nacional de Cuba), which he considered the cultural chef-d’oeuvre of his new socialist state, and with his $200,000 funding to the company, he sought to make the arts, particularly ballet, available to everyone.

When Alonso’s company hosted the first ever International Ballet Festival of Havana (Festival de Ballet de La Habana)from March 28, 1960 to April 2, 1960 at the Pro Arte Auditorium, American Ballet Theatre visited Cuba, reuniting with the beloved Alonso. This would be the first and last time ABT would dance in Alonso’s home country for half a century.

Fifty years later, ABT’s return to Cuba in 2010 received wide-spread national attention. When Fidel Castro rose to power and established his alliance with the Soviet Union and its socialist regime, the U.S. established policies that were intended to isolate the country economically and diplomatically, longer than it has with any other country. The historic return to Cuba was one of a series of cultural exchanges allowed under the Obama administration, who eventually restored diplomatic ties with leader Raul Castro.

The tour almost didn’t happen when the White House drew the line at accepting outside American sponsorship to help pay for it. It was the Cuban government who stepped forward in the end and pledged to accommodate the Company’s members while in Havana at no charge, ensuring that ABT would get to perform in Cuba after all.

Even though the significance of this was rooted in fraught political relations, the artists at ABT saw past this and focused on the unity and goodwill that come from cultural exchanges.

This visit was particularly special, as ABT was personally invited by Alicia herself to take part in the 22nd Havana International Ballet Festival, at which she was being honored.

ABT’s performances were held in the Karl Marx Theatre in the Cuban capital. Within two days, tickets to see the Company perform were sold out, however, ABT’s performances of Billy the Kid, Theme and Variations, Fall River Legend, Jardin aux Lilas, Fancy Free, Les Sylphides and Graduation Ball were broadcast to the entire country.

Everyone was watching as ABT paid special tribute to Alicia with Theme and Variations, a ballet created for ABT with Alonso and Igor Youskevitch in the leading roles, by the legendary choreographer George Balanchine in 1947.

For two ABT dancers, José Manuel Carreño and Xiomara Reyes, the visit meant even more, as it was their homecoming, both having left Cuba as young adults and not returned since.

Reyes left home in 1992 at just 18 years old. In an interview with The Associated Press in 2010, Reyes shared that her anticipation and excitement in the weeks before her return were keeping her up at night, adding, “I am filled with so many emotions: sadness, joy, everything. To be here and see people you haven’t seen in 18 years. It is very beautiful to see that the people remember you.” She was reunited with her half-sister, two nieces, and many people who had worked with her as a young dancer. Carreño told Dance Magazine that Fall that the homecoming “was a dream come true.”

ABT’s presence in Havana was one filled with openness and curiosity. The historic visit allowed American and Cuban dancers to meet, learn from each other’s worlds and come together in the name of ballet. ABT’s dancers took class with Cuban teachers, gaining valuable insight into the Cuban technique.

Students at The Cuban National Ballet School, the largest ballet school in the world, had the rare opportunity to take a two-hour master class with ABT’s Artistic Director Kevin McKenzie, where he demonstrated each step full-out. The students were also gifted with 500 new pairs of ballet slippers. ABT’s performances immediately won over the Cuban audiences, who shared their boundless love and appreciation for the American dancers with fervor.

The visit proved that sometimes individual people can step out from the shadows of their politically mired nations. That we as individuals can show up for each other despite historic and deep-seated tensions.

None of it could have happened if not for Alicia Alonso, who shared her thoughts at the festival:

“It’s so beautiful to see that we all speak the same language when we are on stage.”

The tour was a reminder that there is much to communicate through the universal language of art. It was reassurance that bonds can form, and ties can be strengthened when we acknowledge and come together through the sameness of our differences.

One day, hopefully one day soon, we will begin to travel the world again and share our artistic language with those overseas. What a great wide world we live in, one that has been forced to put up strict boundaries to keep its people safe. There is so much out there to explore, so many places to go, and it is so much better when you go there dancing for the sake of  humanity, speaking to the soul of mankind.