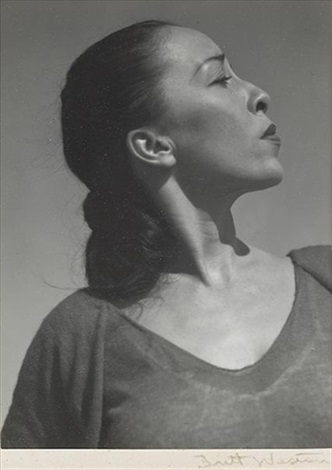 In honor of Hispanic Heritage Month, we are recognizing Carmelita Maracci, a ballet dancer, choreographer and teacher influential to ABT's history.

"Carmelita Maracci was the name that everyone should have known, but few did. She was a standout of her generation."

It is rare to encounter a person who has been described with such a wide range of impassioned, fervent adjectives—ones that are only fit for those who have a touch of the extraordinary inside of them. “Phenomenon,” “jaw-dropping,” “a legend”—these are just a few ways dance critics and contemporaries have described Carmelita Maracci.

Hers was the name that everyone should have known, but few did. She was a standout of her generation. John Martin, dance critic for The New York Times in 1937, said she was “manifestly destined for a great career.” Robert Joffrey, a student of Maracci’s, recalled, “There was, and still is, no one like her. She had incredible strength and supreme delicacy. Her technique was astonishing, perfection itself.” It was even said that she “danced with thunder,” but she could have been thunder itself—her talents almost magical.

From her birth in 1908, Carmelita Maracci’s origins were shrouded in mystery, at least for her. Told by her mother that she was born in Montevideo, Uruguay, it was only much later that Maracci’s husband found out and shared with her that she was actually born in Goldfield, Nevada. Her father, both Italian and Spanish, raised his daughter as Spanish, and despite her puzzling background, this had the biggest impact on who she came to be. After Maracci’s family moved to Los Angeles, where she finished her schooling, her parents encouraged her to pursue a future as a dancer, and off she went to New York.

There she studied with Mikhail Mordkin, who formed the Mordkin Ballet, the predecessor to Ballet Theatre. Eventually, she made her way back to Los Angeles and it was there, in the 1930s, that she met Agnes de Mille. Although they were just a few years apart in age, de Mille studied ballet under Maracci’s tutelage.

From the moment they met, de Mille’s fervent admiration and awe of her teacher solidified a strong bond between the two of them. She could see that Maracci was not just a good ballet dancer.

She created something special when she experimented with blending ballet and Spanish dance, a style she called Hybrid dancing, which she began to bring to audiences on both the East and West coasts.

In the early 1950s, Agnes de Mille urged Maracci to choreograph a new work for Ballet Theatre. She created Circo de Espana, which premiered on April 19, 1951. It was a suite of five serious and comic Spanish dances, and on opening night, Carmelita danced the leading roles in three of the pieces: La Maja y el Euisenor, Fire Dance and Portrait in Raw Espana. It was then planned that Alicia Alonso would take over the roles following that performance opening night.

Despite the talents and stage presence Maracci brought, despite rehearsals of a promising and exciting show, the ballet fell flat. The premiere was not a smashing success, and although critics praised her unfailing, staggering technique, the New York audience was not quite sure what to make of the ballet and had a markedly tepid response.

As the story goes, co-director of Ballet Theatre, Oliver Smith, told de Mille that the piece needed to be adjusted and sent her to give Maracci some words of encouragement to pull the piece back together. Antony Tudor told de Mille that the ballet was “No good,” a message she passed along. When she delivered the news to Maracci, she said it “produced in no time a collapse…because Carmy was always on the emotional brink, Donald Saddler [a Soloist at Ballet Theatre] had to carry her from the theater in his arms. And that wasn’t the first time she committed career suicide.”

Maracci retreated away from the limelight and away from Ballet Theatre. Sadly, there are very few records left of her ballet, Circo de Espana. It was only many years later that a 72-year-old Carmelita admitted the devastation she felt at the time to Los Angeles journalist Donna Perlmutter: “She came to deliver the verdict and then she told me that Tudor always says what he doesn’t mean, that he meant I’m no good.”

Carmelita Maracci was a woman whose dancing was powerful enough to be compared with the elements of the earth—her passion burned, her presence on stage was so grounding that she owned spaces and commanded time. Yet, her gifts came with a deep-feeling heart. She was an artist that prioritized feelings and meanings over commercial success.

It didn’t need to matter that the audience liked her work. That wasn’t the point of it. She wanted to dance real stories because she felt real pain. She had led a relatively privileged life herself, a normal childhood, supportive parents, and the pains and horrors in the world that she spoke of sometimes seemed to belong to another world.  In fact, they belonged to other people and she just felt them deeply.

She refused to dance in fairy tale ballets with otherworldly and mystical creatures: “I could not be a dancer of fine dreams and graveyard decor. So, I danced hard about what I saw and lived.”

Most of the world never got to see the greatness that was Carmelita Maracci. Her legacy continues on through her beloved students. Jerome Robbins, Carmen de Lavallade and even Charles Chaplin – as well as ABT’s own Erik Bruhn, Christine Sarry and Cynthia Gregory – owe their early dance education to her. Gregory has given accounts of Maracci teaching in class “on pointe and wearing pink tights, puffing on a cigarette, flicking it out the window and dashing off a fast, furious set of pirouettes.”

The world was perhaps robbed of the opportunity to witness the great Maracci, but her students received an education that few others had access to. She infused her ballet classes with lessons about literature, politics and philosophy. She talked to her students not just as dancers but as people. She left a large impact on many dancers, and although that can be a profound legacy, there are others that still call her career trajectory a “tragedy.”

Carmelita said it best when she denounced the notion that her “unplanned oblivion” was a tragedy. “Save that word for human suffering,” she said, “for wars that kill innocent people, for the devastation of the poor and unwanted, for the corruption and cruelty that cause these things in the world. Mine is no tragedy. If art could relieve misery, I’d gladly sacrifice it.”

She refused to conform to or make way for a lot of things in her lifetime—the commercial side of the dance industry, the conventional structure of a ballet class, the confines of a corps de ballet.

But most of all, she refused to compromise who she was for anyone else. She was unique and she owned that.

Greatness can often come with sadness—but mostly from the people who impose their ideas of greatness upon us, and that comes with a considerable and often unfair burden. Sometimes it can be enough to stand quietly in your convictions, knowing that you do so for yourself, knowing that that in itself is great.