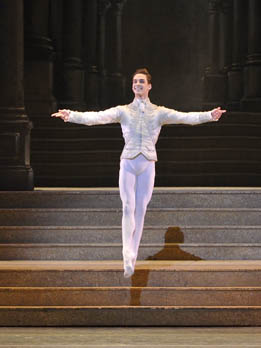 To encourage the personal and artistic development of young artists, the one-year Leonore Annenberg Arts Fellowship will provide funds to cover training and expenses outside of ABT’s regular season, such as guest coaches/teachers, master teachers, a physical therapist/trainer, specialty teachers to explore artistic areas outside of dance, pianists and studio space, as well as college courses and business/entrepreneurial interests.

Gorak joined ABT’s Studio Company in 2006 and was named an apprentice with American Ballet Theatre in January 2009.  He joined ABT as a member of the corps de ballet in January 2010 and was promoted to Soloist in August 2014.  His repertoire with the Company includes the Bronze Idol in La Bayadère, the Prince in Cinderella, Franz in Coppélia, the Dancing Master in Gaîté Parisienne, the peasant pas de deux in Giselle, the Beggar Chief in Manon, the Nutcracker Prince, the Chinese Dance, Russian Dance and the Recruit in Alexei Ratmansky’s The Nutcracker, Lensky in Onegin, Benvolio in Romeo and Juliet, Prince Désiré and the Bluebird in Ratmansky’s The Sleeping Beauty, Benno and the Neapolitan Dance in Swan Lake, The Poet in Les Sylphides, a Goat in Sylvia and roles in Bach Partita, In the Upper Room, Raymonda Divertissements, Seven Sonatas, Symphony in C and Theme and Variations.  He created the role of Ferdinand in Ratmansky’s The Tempest and leading roles in Dumbarton and Private Light.

The Leonore Annenberg Fellowship Fund for the Performing and Visual Arts is a project of the Annenberg Public Policy Center at the University of Pennsylvania. Leonore Annenberg (1918-2009) served as U.S. Chief of Protocol during the first term of President Ronald Reagan.  Her philanthropic work focused on education, the arts and civic affairs.  Visit www.leonoreannenbergscholarships.org for more information.