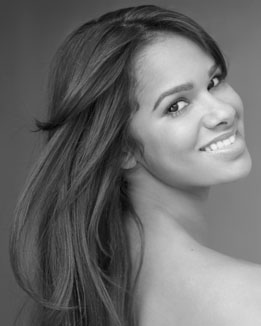 American Ballet Theatre Soloist Misty Copeland has been named by TIME Magazine to the 2015 TIME 100, its annual list of the 100 most influential people in the world.  The full list and related tributes appear in the April 27 issue of TIME.

Born in Kansas City, Missouri and raised in San Pedro, California, Misty Copeland began her ballet studies at the age of 13 at the San Pedro City Ballet. She joined ABT’s Studio Company in September 2000, then joined American Ballet Theatre as a member of the corps de ballet in April 2001 and was appointed a Soloist in August 2007.  With ABT, she has danced such leading roles as Swanilda in Coppélia, Clara, The Princess in The Nutcracker, the title role in Firebird, the Cowgirl in Rodeo and Odette-Odile in Swan Lake.  Copeland received the 2008 Leonore Annenberg Fellowship in the Arts and was named National Youth of the Year Ambassador for the Boys & Girls Clubs of America in 2013.  In 2014, President Obama appointed Copeland to the President’s Council on Fitness, Sports and Nutrition.  She is the recipient of a 2014 Dance Magazine Award and the author of the best-selling memoir, Life in Motion and the children’s book Firebird.

The TIME 100, now in its twelfth year, recognizes the activism, innovation and achievement of the world’s most influential individuals. As TIME Editor Nancy Gibbs has said of the list in the past, “The TIME 100 is a list of the world’s most influential men and women, not its most powerful, though those are not mutually exclusive terms …. While power is certain, influence is subtle…. As much as this exercise chronicles the achievements of the past year, we also focus on figures whose influence is likely to grow, so we can look around the corner to see what is coming.”