Dr. Robert Galvin and Jennifer Garner to be Honored as “ABT Heroes”

ABT’s Summer Celebration to be Hosted by Renée Elise Goldsberry 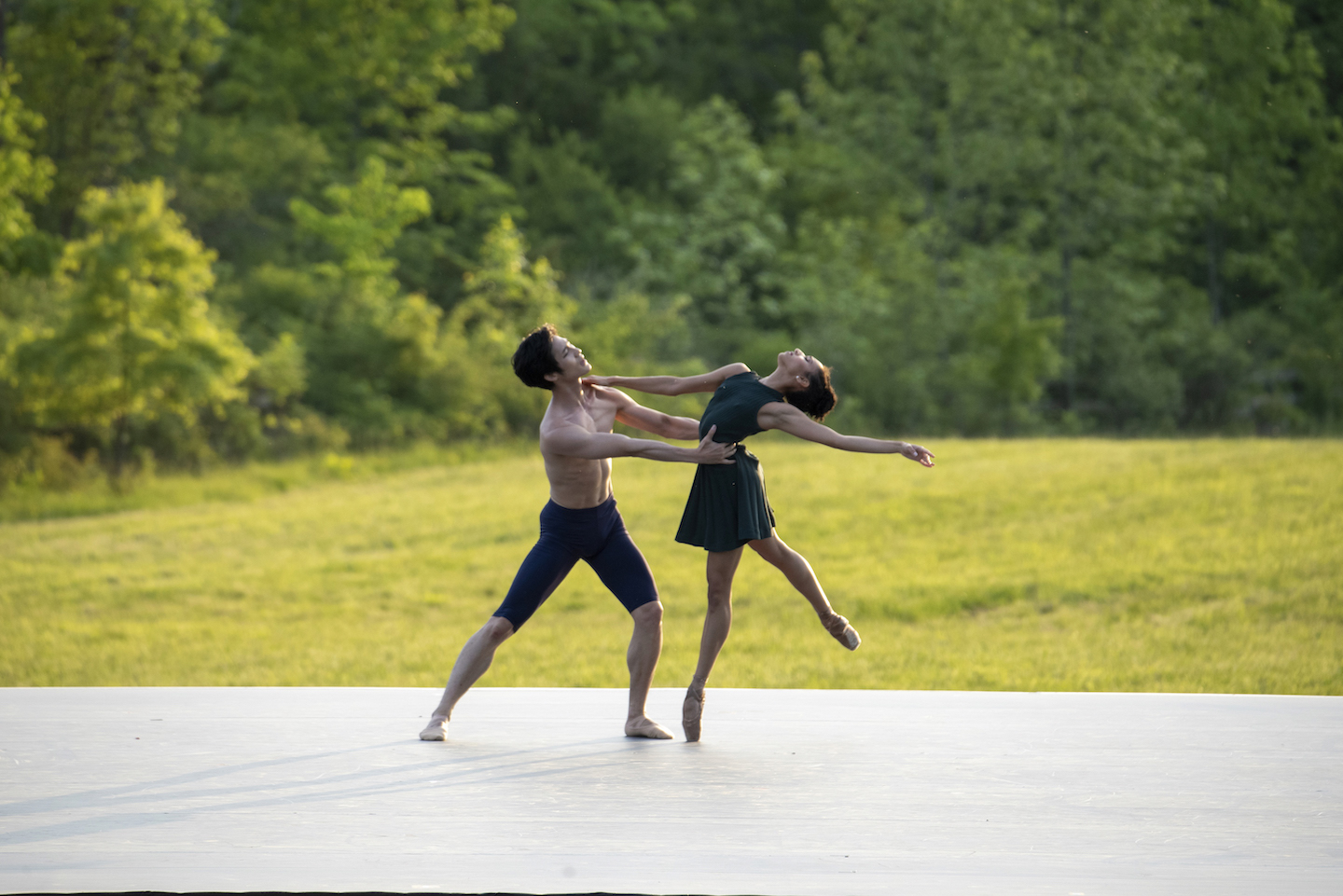 New works by Silas Farley, Helen Pickett, and James Whiteside, all filmed during outdoor performances, will headline American Ballet Theatre’s 2021 Summer Celebration on Thursday, July 15 at 7:00 P.M. EDT, hosted for free on the platform Afterparty. The First Lady of the United States, Jill Biden will deliver the program’s welcoming remarks.  Honorees for the evening include ABT’s medical advisor Dr. Robert Galvin and ABT champion supporter and actress Jennifer Garner, both of whom have generously offered their time and talent to sustain America’s National Ballet Company® over the past 18 months.

The backdrop of ABT’s Summer Celebration will reflect the spirit of innovation and creativity cultivated throughout the Covid-19 pandemic, as well as the Company’s deepened commitment to diversity, equity, and inclusion.  With the recent formation of ABT RISE (Representation and Inclusion Sustain Excellence), a reinvigorated institutional commitment to fostering inclusion and increasing diversity at all levels of the organization, ABT continues to champion, enhance, and support inclusion and diversity on its stages and in classrooms where it operates.

Summer Celebration, hosted on the platform Afterparty, will be free to viewers who register with a valid email address on ABT’s website.

Silas Farley, a former dancer with New York City Ballet, has created Collage & Creed, Genealogy, which will have its digital premiere at ABT’s Summer Celebration.  A ballet for 12 dancers, the work is set to music by Arvo Pärt, with costumes inspired by Cassia Farley.  Collage & Creed, Farley’s first work for ABT, received its World Premiere as a ballet in two parts, Genealogy and Concerto (Part I) and Collage and Creed (Part II), with music by Pärt and Johann Sebastian Bach, on June 24, 2021 at Green Box Arts Festival in Green Mountain Falls, Colorado, following a five-week bubble residency.  “Collage & Creed explores layers of personal, artistic, and spiritual lineage through the transcendent music of Arvo Pärt and Johann Sebastian Bach,” said Farley.  The initial development of Genealogy and Concerto, III. Presto of Collage & Creed Part I was supported by the New York Choreographic Institute, an affiliate of New York City Ballet, during its Fall 2017 Session.  The initial development of Collage & Creed Part II was supported by The School of American Ballet during its 2013 Summer Choreography Workshop.  Collage & Creed was filmed at Green Box Arts Festival by Ray Bailey.

Desire, Helen Pickett’s first work for American Ballet Theatre, will be given its digital premiere at ABT’s Summer Celebration.  Set to music composed and recorded by Peter Salem, Desire is a work for five ABT dancers.  “Desire is a 15-minute exploration of the human experience inspired by two threads in Gustave Flaubert’s Madame Bovary: Emma Bovary’s vibrant imagination and the societal energies of the town she inhabits,” said Pickett.  “The five dancers embody Emma’s dreamscape and the town’s collective dynamics.  I utilize two set elements: a runner rug, representing nature and imagination, and a bench, symbolizing utilitarian structure and private space.”  Desire was created on ABT dancers while safely quarantined at Kaatsbaan Cultural Park in Tivoli, New York and received its World Premiere on May 20, 2021 at Kaatsbaan.  The ballet was filmed for ABT by Nic Petry and Dancing Camera.

City of Women, a new work choreographed by Principal Dancer James Whiteside, will be given its digital premiere at ABT’s Summer Celebration.  Set to music by Franz Schubert, City of Women was created for nine ABT dancers. It received its World Premiere on May 20, 2021 at Kaatsbaan Cultural Park in Tivoli, New York.  “City of Women is about the generational knowledge passed from ballerina to ballerina,” said Whiteside.  “I’m amazed by the generosity of these ballerinas who spend their post-stage lives passing down the details of the art form to younger generations.”  City of Women is Whiteside’s second work for ABT.  The work was originally workshopped during the 2018 ABT Incubator and featured Isabella Boylston, Gillian Murphy, and Catherine Hurlin.  The ballet was filmed for ABT by Nic Petry and Dancing Camera.

American Ballet Theatre’s Summer Celebration will also include highlights from recent filmings of Alexei Ratmansky’s Bernstein in a Bubble and the balcony pas de deux from Kenneth MacMillan’s Romeo and Juliet.

Ratmansky’s Bernstein in a Bubble received its digital World Premiere during ABT Live from City Center | A Ratmansky Celebration on March 23, 2021.  The ballet is set to Leonard Bernstein’s Divertimento and features lighting by Brad Fields.  Bernstein in a Bubble was filmed by Nel Shelby Productions.

The balcony pas de deux from MacMillan’s Romeo and Juliet, filmed for ABT’s Summer Celebration on location at Wave Hill, Bronx, New York on June 21, 2021, will be performed by Cassandra Trenary and Calvin Royal III.  Set to a score by Sergei Prokofiev, Romeo and Juliet features costumes by Nicholas Georgiadis.  The pas de deux was filmed by Tim Fuchs.

In recognition of their extraordinary contributions to ABT’s continued operations and inventive programming over the last 18 months, ABT medical advisor Dr. Robert Galvin and ABT supporter and actress Jennifer Garner will be honored as “ABT Heroes” at Summer Celebration.  Dr. Galvin has provided invaluable guidance, time, and expertise to the ABT community throughout the pandemic.  From testing and quarantine protocols to daily monitoring and tracking of virus rates, Dr. Galvin’s insights and advice have enabled ABT’s dancers and staff to safely rehearse, create, and perform over the last 18 months.  Jennifer Garner lent her time and talent to hosting ABT’s first digital productions in the early months of the pandemic, ABTKids and participated in ABT: Together Tonight.  Her support allowed ABT to successfully pivot from stages to screens, elevating ABT’s online presence and introducing millions of young audiences to the magic of ballet.

“In times of upheaval and uncertainty, good friends are essential,” said Kara Medoff Barnett, ABT Executive Director.  “Bob Galvin and Jen Garner have been stalwarts for ABT throughout the Covid crisis.  They answered every call for help with graciousness and generosity, and they provided optimism and encouragement when we needed it most.  For keeping us safe and keeping us sane, for lifting artists up and cheering them on, these two heroes deserve a standing ovation (and several curtain calls).  They are remarkable humans, brilliant leaders, and cherished friends.”

Summer Celebration will also spotlight ABT Heals, a live music and dance program shared virtually throughout Mount Sinai Kravis Children’s Hospital.  ABT Heals, which began in the early months of the pandemic, serves to provide comfort and the beauty of ballet to Mount Sinai’s physicians and staff, patients and their families.  Programming includes virtual conversations with ABT dancers, special performances by ABT orchestra members, lessons and insights from ABT’s conductors, video highlights from recent and historical ballet performances, and appearances by special ABT guests.  The program honored the memory of Dr. Barry Webber, a beloved surgeon at Mount Sinai Queens who passed away from complications of Covid-19 in April 2020.  Dr. Webber, a lover of classical music and ballet, was married to Harriet Clark, a former ABT dancer and Principal Teacher of the ABT Jacqueline Kennedy Onassis School Children’s Division.

To register to watch for free or to learn more about American Ballet Theatre’s Summer Celebration, please visit www.abt.org/abt-summer-celebration/.

Commissions and presentations of new works by women choreographers are supported by the ABT Women’s Movement.

Champion support for the ABT Women’s Movement is provided by Jenna Segal. Additional leadership support provided by the Virginia B. Toulmin Foundation.

American Ballet Theatre launched The Ratmansky Project in 2016 to foster the artistry of Artist in Residence Alexei Ratmansky and his creation of new works for the Company. Lead Gifts for The Ratmansky Project have been provided by Avery and Andrew F. Barth, the Blavatnik Family Foundation, Mr. and Mrs. Hamilton E. James, and The Ted and Mary Jo Shen Charitable Gift Fund.

ABT extends deepest gratitude to:

Bank of America, Lead Corporate Partner of ABT Studio Company.