Principal Dancer Marcelo Gomes to Celebrate 20th Anniversary with ABT 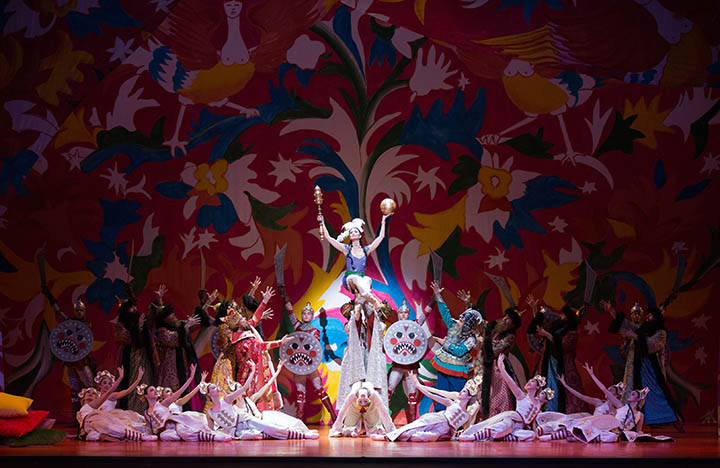 Stella Abrera in The Golden Cockerel.

American Ballet Theatre’s 2017 Spring Gala on Monday, May 22 at 6:30 P.M. will feature the New York Premiere of Whipped Cream, choreographed by ABT Artist in Residence Alexei Ratmansky, with scenery and costumes by artist Mark Ryden and lighting by Brad Fields. Whipped Cream, with a libretto and score by Richard Strauss, is based on the two-act ballet originally created as Schlagobers, which premiered at the Vienna State Opera in 1924.  Ratmansky’s production will receive its World Premiere by ABT on March 15, 2017 at Segerstrom Center for the Arts in Costa Mesa, California.  Whipped Cream will be given twelve performances at the Metropolitan Opera House May 22-24 and June 26-July 1.  For more information on ABT’s 2017 Spring Gala, please call the Special Events Office at 212-477-3030, ext. 3310.

The Company Premiere of Alexei Ratmansky’s Souvenir d’un leie cher will be part of a Tchaikovsky Spectacular program beginning Monday evening, July 3.  Souvenir d’un lieu cher is set to music of the same name by Peter Ilyitch Tchaikovsky, orchestrated by Alexander Glazunov. Featuring sets and costumes by Keso Dekker with lighting by James F. Ingalls, the ballet for four dancers received its World Premiere by Het National Ballet on February 16, 2012 in Amsterdam.  Souvenir d’un lieu cher will be presented on alternating programs with George Balanchine’s Mozartiana and Tchaikovsky Pas de Deux, Marcelo Gomes’AfterEffect and Ratmansky’s Nutcracker Pas de Deux and Aurora’s Wedding.  Aurora’s Wedding, Act III of Ratmansky’s staging of The Sleeping Beauty with choreography by Marius Petipa, will omit the Hop ‘o my Thumb and Cinderella dances and add The Porcelain Trio and Three Ivans, divertissements originally choreographed by Bronislava Nijinska.  Set to music from The Nutcracker, both divertissements were created for Diaghilev’s Ballets Russes staging of The Sleeping Princess in 1921.  Three Ivans was first presented by Ballet Theatre as part of Princess Aurora (a suite of divertissements from The Sleeping Beauty) in 1941.  Performances of the Tchaikovsky Spectacular run through July 8.

American Ballet Theatre’s 2017 Spring season will include an additional five full-length ballets beginning with Don Quixote which opens the Met season on Monday evening, May 15 with Gillian Murphy as Kitri, Cory Stearns as Basilio, Hee Seo as Mercedes and

James Whiteside as Espada.  Staged by Kevin McKenzie and Susan Jones, with choreography after Marius Petipa and Alexander Gorsky, Don Quixote is set to music by Ludwig Minkus and features scenery and costumes by Santo Loquasto and lighting by Natasha Katz.  The McKenzie/Jones staging of the current production was first performed by ABT on June 12, 1995.  Don Quixote will be given eight performances through Saturday evening, May 20.

The season’s performances of Giselle begins Thursday evening, May 25 led by Hee Seo in the title role, opposite Cory Stearns as Albrecht and Veronika Part as Myrta.  Set to music by Adolphe Adam, with scenery by Gianni Quaranta, costumes by Anna Anni and lighting by Jennifer Tipton, Giselle features choreography after Jean Coralli, Jules Perrot and Marius Petipa and has been staged for ABT by Artistic Director Kevin McKenzie.  The world premiere of Giselle, one of the oldest continually‑performed ballets, occurred at the Theatre de l’Academie Royale de Musique in Paris on June 28, 1841.  The ballet was first presented by ABT (then Ballet Theatre) at the Center Theatre in New York City on January 12, 1940 with choreography by Anton Dolin and scenery and costumes by Lucinda Ballard.  The leading roles were danced by Annabelle Lyon and Anton Dolin.  American Ballet Theatre’s sixth production, featuring scenery by Gianni Quaranta and costumes by Anna Anni, was created for the film Dancers, produced in 1987 by Cannon Films.  This production’s first public performance was given on March 20, 1987 at the Shrine Auditorium in Los Angeles, California, with Marianna Tcherkassky as Giselle and Kevin McKenzie as Albrecht.  The current staging is by McKenzie, using the Quaranta and Anni designs. Giselle will receive eight performances through May 31.  ABT will celebrate the 20th Anniversary year of Principal Dancer Marcelo Gomes during his performance in the leading role of Albrecht on Tuesday evening, May 30.

Eight performances of Swan Lake, choreographed by Kevin McKenzie after Marius Petipa, will be given beginning Monday, June 12 with Isabella Boylston and Alban Lendorf leading the opening night cast.  Swan Lake is set to the score by Peter Ilyitch Tchaikovsky and features scenery and costumes by Zack Brown and lighting by Duane Schuler.  This production of Swan Lake premiered on March 24, 2000 at the Kennedy Center for the Performing Arts in Washington, D.C. with Julie Kent (Odette-Odile), Angel Corella (Prince Siegfried) and Marcelo Gomes (von Rothbart).

John Cranko’s Onegin will be given eight performances during the Company’s Spring season beginning on Monday, June 19 with Diana Vishneva as Tatiana and Marcelo Gomes as Eugene Onegin.  Set to music by Peter Ilyitch Tchaikovsky, arranged and orchestrated by Kurt-Heinz Stolze, Onegin is based on the verse-novel Eugene Onegin by Alexander Pushkin. Onegin received its World Premiere on April 13, 1965 by the Stuttgart Ballet in Stuttgart, Germany.  The ballet received its Company Premiere by American Ballet Theatre on June 1, 2001 at the Metropolitan Opera House in New York with Julie Kent (Tatiana), Robert Hill (Onegin), Vladimir Malakhov (Lensky) and Maria Riccetto (Olga).  This new production, with sets and costumes by Santo Loquasto and lighting by James F. Ingalls, was premiered by the National Ballet of Canada on June 19, 2010 at the Four Seasons Centre for the Performing Arts, Toronto, Canada and was first performed by ABT on June 4, 2012 at the Metropolitan Opera House.  Le Corsaire is staged for ABT by Reid Anderson and Jane Bourne.

ABTKids, American Ballet Theatre’s annual one-hour introduction to ballet, is scheduled for Saturday morning, May 20 at 11:30 A.M.  All tickets for ABTKids are $25.

Subscriptions for American Ballet Theatre’s 2017 Spring Season at the Metropolitan Opera House, on sale beginning Wednesday, October 26, are available by phone at 212-362-6000, or online at ABT’s website www.abt.org.

Leadership support for Whipped Cream and The Golden Cockerel has been provided by the Blavatnik Family Foundation and the Lloyd E. Rigler – Lawrence E. Deutsch Foundation.  Additional support has been provided by Linda Allard, Avery and Andrew F. Barth, The Susan and Leonard Feinstein Foundation, Brian J. Heidtke, the Segerstrom Center for the Arts, the Ted and Mary Jo Shen Charitable Gift Fund, The H. Russell Smith Foundation, and Stewart R. Smith and Robin A. Ferracone.  Whipped Cream and The Golden Cockerel are generously supported through an endowed gift from The Toni and Martin Sosnoff New Works Fund.

AfterEffect has been generously supported through an endowed gift from The Toni and Martin Sosnoff New Works Fund.

Don Quixote is generously supported through an endowed gift from Anka K. Palitz, in memory of Clarence Y. Palitz, Jr.

David H. Koch is the Lead Underwriter of American Ballet Theatre’s The Nutcracker.

American Ballet Theatre’s performances of Onegin are generously supported through an endowed gift from Ruth and Harold Newman.