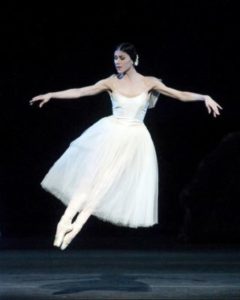 American Ballet Theatre Principal Dancer Paloma Herrera will give her farewell performance with the Company at the 2:00pm matinee of Giselle on Wednesday, May 27, 2015 at the Metropolitan Opera House.  Ms. Herrera’s farewell performance was previously scheduled for Tuesday, June 9 as Princess Aurora in the Company’s new staging of The Sleeping Beauty.

Ms. Herrera has decided to change the date of her final ABT performance to dance a role she has performed since 2001, and one that is very familiar to New York audiences.

American Ballet Theatre’s 2015 Spring season runs from May 11 through July 4. Individual tickets go on sale beginning Sunday, March 22 at 9:00am at the Metropolitan Opera House box office, by phone at 212-362-6000 and online at www.abt.org.