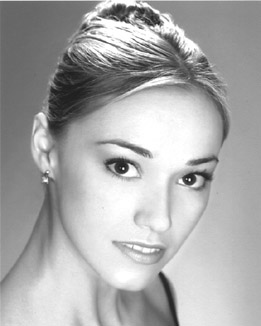 Born in Bad Axe, Michigan, Sarah Smith began her first serious ballet training at Boca Ballet Theatre at the age of 11. She remained there for three years under the tutelage of Jane Tyree and Dan Guin. Smith then attended The Harid Conservatory for four years on a full tuition scholarship where her teachers were Victoria Schneider, Olivier Pardina and Svetlana Osiyeva. Smith then received a full scholarship to train at the Joffrey Ballet School in New York.

In 2002, Smith decided she would like to further her academic studies and accepted a merit scholarship to attend Indiana University. There she majored in Ballet Performance and Nutrition Science. She trained with Virginia and Jacques Cesbron, Violette Verdy and was coached by Guillaume Graffin and Julie Kent. Among the roles she danced were the Sugar Plum Fairy in The Nutcracker and Odette in Swan Lake. Since 2003, Smith has performed as a guest artist with Boca Ballet Theatre in Joseph Morrissey’s Flower Festival, Progression and the Sugar Plum Fairy in The Nutcracker.

Smith joined American Ballet Theatre as an apprentice in January 2004 and the corps de ballet in October. Her repertory includes Leto in Apollo, the Aya and the lead D’Jampe in La Bayadère, Mazurka Lady in Coppélia, the Lead Gypsy in Don Quixote, Madame Larina in Onegin, a Harlot in Romeo and Juliet, the Fairy of Sincerity and the Countess in The Sleeping Beauty and roles in Bach Partita, Company B, Duets and workwithinwork.

Smith was a 2010 National YoungArts Foundation Winner in Dance.