ABT and Segerstrom Center created a safe bubble in which 18 dancers developed, rehearsed, and performed works including by Lauren Lovette and Darrell Grand Moultrie 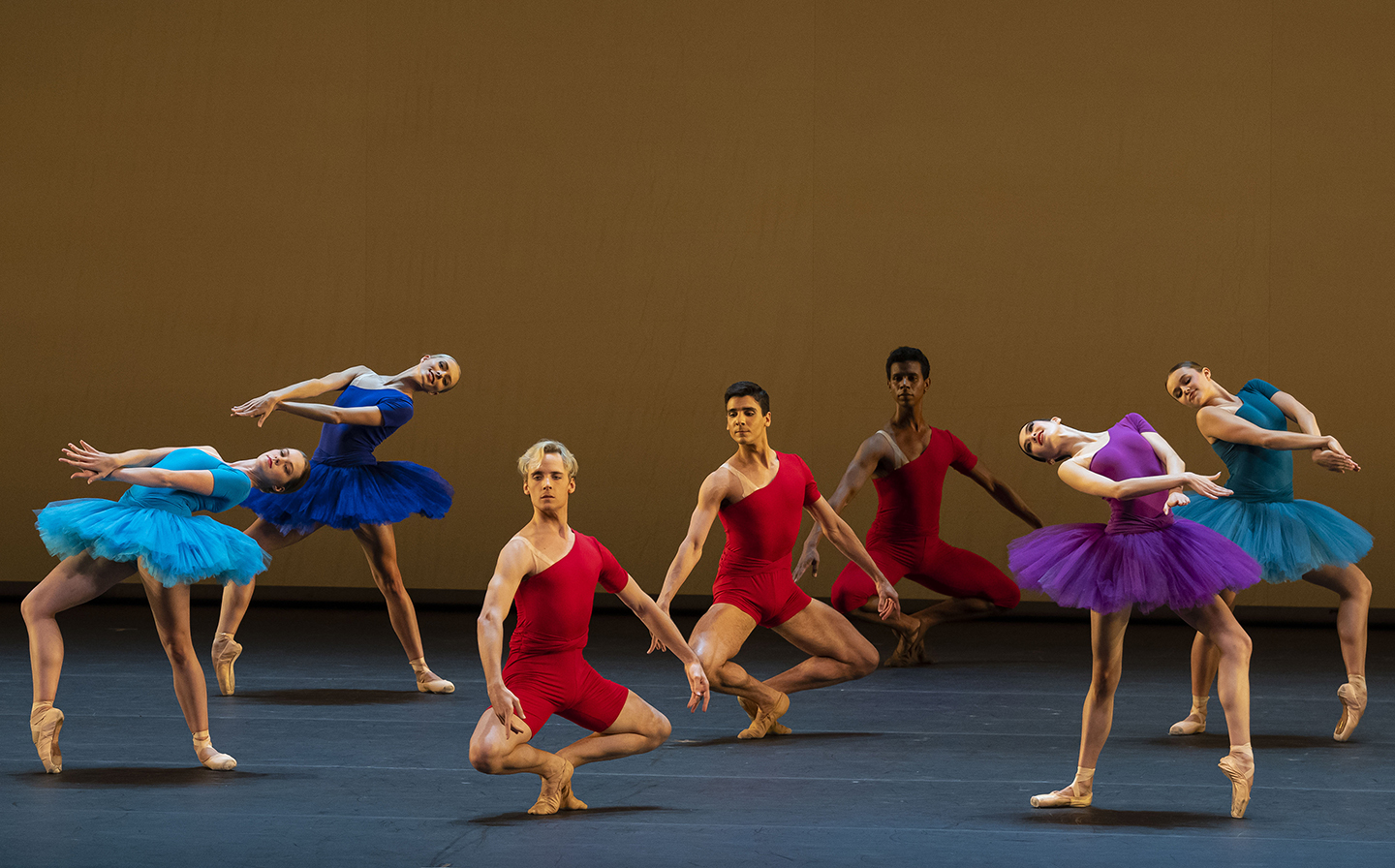 APRIL 27, 2021 | COSTA MESA, CA – Segerstrom Center for the Arts and American Ballet Theatre have completed an exciting new artistic collaboration titled UNITING IN MOVEMENT, during which 18 dancers and the artistic staff of ABT developed and rehearsed three works that culminated in an exhilarating live performance in Segerstrom Hall and which can be streamed on demand from May 12 – 26 at the Center’s website, www.scfta.org.

Uniting in Movement is comprised of works of contemporary choreographers Lauren Lovette and Darrell Grand Moultrie, each with very personal and unique visions for the future of ballet.  The program also pays homage to ABT’s classical heritage with a virtuosic showcase of ballet technique Grand Pas Classique choreographed by Victor Gsovsky and Swan Lake Act II pas de deux with choreography after Lev Ivanov.

In order to perform Uniting in Movement, ABT, America’s National Ballet Company®, was in residence at the Center beginning March 22, rehearsing this new program that received its world premiere before a live audience on Sunday, April 25 in Segerstrom Hall, followed by this streamed version.  These performances are the first in Segerstrom Hall since the shutdown of all live theater in March 2020 due to the COVID-19 pandemic, just one week after the world premiere of ABT’s new production of Alexei Ratmansky’s Of Love and Rage.

The choreographers, dancers and ABT artistic staff lived and rehearsed in a quarantined “bubble,” isolating themselves at the Avenue of the Arts Costa Mesa, A Tribute Portfolio Hotel across the street from the Center, venturing out only to rehearse in the Center studios and, ultimately, perform in Segerstrom Hall. All rehearsal and performance activity adhered to strict medical and safety guidelines, with an initial quarantine and testing period prior to the start of ABT’s residency.

Wincome Hospitality CEO Paul Sanford said, “Avenue of the Arts Costa Mesa, A Tribute Portfolio Hotel and Wincome Hospitality, is proud to work with Segerstrom Center for the Arts and be the host hotel for American Ballet Theatre. Their mission of wanting to preserve the classics of the past for modern audiences and foster innovation in the world of ballet should be lauded. We’re excited to help the Center bring ABT to Costa Mesa for Southern Californians to enjoy what will surely be very beautiful, emotionally moving, and entertaining performances.”

Ms. Lovette’s work, La Follia Variations, is set to music of the same name by Francesco Geminiani. With costumes by fashion designer Victor Glemaud, La Follia Variations brims with poetry, wit, nuance, and power. Mr. Moultrie’s Indestructible Light, set to music by Duke Ellington, Count Basie, Neal Hefti and Billy Strayhorn, is an expansion of his earlier work for the Company created in an East Coast bubble in fall 2020.  Indestructible Light is a work for eight dancers and celebrates the resilience of artists despite impossible odds.  The pas de deux from Swan Lake, Act II has replaced the previously announced Let Me Sing Forevermore by Jessica Lang.

“These creations reflect a time of recalibration on how we create and deliver new work, reinvent how to gather together to create, and what it means to use this art form to lift us all, artist and audience alike,” said Kevin McKenzie, ABT Artistic Director. “Lauren’s use of classical vocabulary for dynamic effect of empowerment and Darrell’s facile use of classical technique fused with classic jazz are contrasted with two pas de deux.  All of which exemplify the vibrant spirit of American Ballet Theatre.”

Segerstrom Center President Casey Reitz said, “As you can imagine, Uniting in Movement is a complex project requiring the combined, or uniting, resources and experience of both the Center and ABT, particularly during this period of quarantine. The project aligns with the mission of our Center for Dance and Innovation, which was established to support and advance the creative and sometimes even experimental process of developing new works by talented artists. The Center and ABT have a long history of producing extraordinary dance projects, including new productions, world premieres, and two projects that were broadcast on Great Performances: Dance in America. We are especially proud of how Uniting in Movement so beautifully confirms the resilience and indomitable spirit of the arts and artists.”

“The progression of steps is one of my favorites among the classical ballet style. These dancers give me hope for the future of dance, and this piece of choreography is a celebration of that hope.” – Lauren Lovette

As a Principal Dancer with the New York City Ballet, Lauren Lovette has performed a broad range of repertoire, and that diversity of artistic experience informs her choreography, which covers dizzying swaths of ground. Originally created for the ABT Studio Company and completed on the day the ABT studios closed in March 2020, La Follia Variations is now being set on the main company and having its Company premiere at Segerstrom Center for the Arts.

In this beloved pas de deux from Act II of the full-length ballet Swan Lake, Prince Siegfried falls in love with Odette, a beautiful princess who has been transformed into a swan by an evil sorcerer.

“Indestructible Light is inspired by where we are now in our lives and how important it is to stay connected to hope, love, and joy. I wanted the great music of American composers Duke Ellington, Neal Hefti, Billy Strayhorn, and Count Basie to serve as the foundation to take the dancers on an exciting, physical  journey that resonates with audiences. I’m always excited about finding ways to use great music and the dancers’ bodies to bring inspiration to people. No matter what’s happening around us, we must always remember here’s a light within that can never be shut off.”

Indestructible Light is Darrell Grand Moultrie’s first work for American Ballet Theatre. He began work on the piece this past fall in a quarantined bubble at PS 21 in Chatham, New York. Having premiered on the screen in November 2020 with six dancers, Indestructible Light is being reimagined for the stage for the first time at Segerstrom Center for the Arts. Its dynamism and undeniable energy will delight audiences.

Lauren Lovette
Lauren Lovette was born in Thousand Oaks, California and began studying ballet at the age of 11 at the Cary Ballet Conservatory in Cary, North Carolina. She attended summer courses at the School of American Ballet, the official school of New York City Ballet, during the summers of 2004 and 2005. She enrolled at SAB as a full-time student in 2006. In October 2009, Ms. Lovette became an apprentice with NYCB and joined the company as a member of the corps de ballet in September 2010. She was promoted to soloist in February 2013 and to principal dancer in June 2015.

Lovette received the Clive Barnes Award for Dance in December 2012 and was the 2012-2013 recipient of the Janice Levin Award.

Moultrie is a proud New Yorker, born and raised in Harlem, and a graduate of P.S. 144, The Harbor Conservatory for the Performing Arts, LaGuardia High School, and The Juilliard School.

SPONSORS
Avenue of the Arts Hotel Costa Mesa, a Wincome Portfolio Hotel, is the Hospitality Sponsor for Uniting in Movement. Segerstrom Center for the Arts applauds The Segerstrom Foundation, Ann Conway Family, Mary and Richard Cramer, Kling Family Foundation / Jackie Glass, Dr. and Mrs. Walter Parsadayan, Stewart R. Smith and Robin A. Ferracone, Connie and Dr. Peter Spenuzza and Jaynine and Dave Warner for their support of Uniting in Movement. The Center’s International Dance Series is made possible by the Audrey Steele Burnand Endowed Fund for International Dance and The Segerstrom Foundation Endowment for Great Performances. The ABT cast and company will travel to Costa Mesa via United Airlines, the Official Airline of the Center.

AMERICAN BALLET THEATRE
American Ballet Theatre is one of the great dance companies in the world. Few ballet companies equal ABT for its combination of size, scope, and outreach. Recognized as a living national treasure since its founding in 1940, ABT annually tours the United States, performing for more than 300,000 people, and is the only major cultural institution to do so. Over 81 years, the Company has appeared in a total of 132 cities in 45 countries and has performed in all 50 states of the United States. ABT has recently enjoyed triumphant successes with engagements in Paris, Singapore, Hong Kong, and Oman. On April 27, 2006, by an act of Congress, American Ballet Theatre became America’s National Ballet Company®.

For more information about Avenue of the Arts, visit AvenueOfTheArtsHotel.com.

SEGERSTROM CENTER FOR THE ARTS
Segerstrom Center for the Arts is an acclaimed arts institution as well as a beautiful multi-disciplinary cultural campus. It is committed to supporting artistic excellence, offering unsurpassed experiences and to engaging the entire community in new and exciting ways through the unique power of live performance as well as a diverse array of inspiring arts-based education and community engagement programs. Previously called the Orange County Performing Arts Center, Segerstrom Center is Orange County’s largest non-profit arts organization. In addition to its six performance venues, Segerstrom Center is also home to the American Ballet Theatre William J. Gillespie School and Studio D: Arts School for All (previously named School of Dance and Music for Children with Disabilities).

In addition to Segerstrom Center for the Arts as a presenting and producing institution, it also identifies the beautiful 14-acre campus that embraces the Center’s own facilities as well as two independently acclaimed organizations: Tony Award®-winning South Coast Repertory and the Orange County Museum of Art.UNITING IN MOVEMENT
American Ballet Theatre Residency
On-demand viewing May 12 – 26, 2021