Joo Won Ahn and Aran Bell Promoted to Soloist with ABT 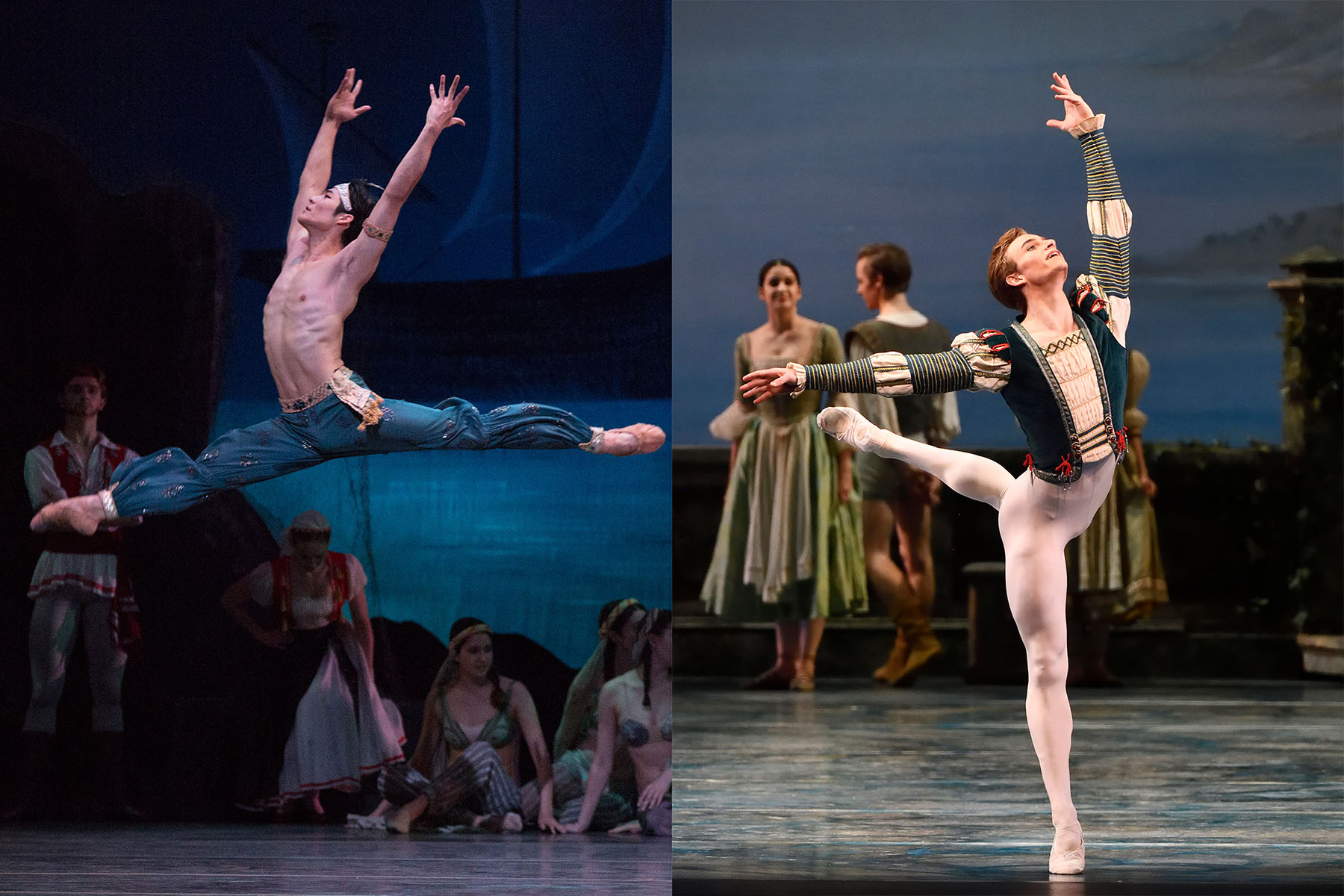 Joo Won Ahn and Aran Bell have been promoted to the rank of Soloist with American Ballet Theatre.  The promotions, announced today by ABT Artistic Director Kevin McKenzie, become effective September 1, 2019.

Joo Won Ahn, originally from Wonju, Korea, began his formal training in 2006 at Y.J. Ballet People Academy and Sunhwa Arts School.  In 2012, he continued his studies at Korea National University of Arts in Seoul.  Ahn was invited to join ABT Studio Company in 2013 after winning the Gold Medal at Youth America Grand Prix in New York City.  He joined ABT as an apprentice in January 2014 and the corps de ballet in June 2014.  Ahn’s repertoire with the Company includes Solor in La Bayadère, a Cavalier in Cinderella, Ali and Lankendem in Le Corsaire, the Russian Dance and Spanish Dance in Alexei Ratmansky’s The Nutcracker, Winter in Ratmansky’s The Seasons, Bluebird, a Fairy Cavalier and Italian Prince in Ratmansky’s The Sleeping Beauty, Neapolitan Dance in Swan Lake, leading roles in AFTERITE, The Brahms-Haydn Variations, Garden Blue, Serenade after Plato’s Symposium and Thirteen Diversions and featured roles in AfterEffect, Bach Partita and In the Upper Room.  He created roles in Mark Morris’s After You and Ratmansky’s Songs of Bukovina.

Aran Bell was born in Bethesda, Maryland and began studying ballet at age four at Central Pennsylvania Youth Ballet and with Denys Ganio in Rome, Italy.  He continued his

training with Fabrice Herrault in New York City and Magaly Suarez in Florida.  He spent several summers at The Royal Ballet School in London and at American Ballet Theatre’s Summer Intensive in New York City.  Bell’s awards include the Hope Award at Youth America Grand Prix Finals in New York City in 2009 and 2010 and the Premio Capri Danza International Award in 2014.  He was featured in the 2011 film First Position: A Ballet Documentary.  Bell joined ABT Studio Company in September 2014.  He became an apprentice with ABT in May 2016 and a member of the corps de ballet in March 2017.  His repertoire includes Romeo in Romeo and Juliet, Lankendem in Le Corsaire, Harlequin’s Friend in Harlequinade, St. John in Jane Eyre, Prince Désiré in Alexei Ratmansky’s The Sleeping Beauty, Prince Siegried and von Rothbart in Swan Lake, leading roles in Garden Blue and Thirteen Diversions and featured roles in AfterEffect, Deuce Coupe, In the Upper Room and Songs of Bukovina.  He created a leading role in AFTERITE and the role of Winter in Ratmansky’s The Seasons.

Jacob Clerico was born in Natick, Massachusetts and began his training at Holliston’s Dancing Arts Center.  He continued studying at the American Ballet Theatre Jacqueline Kennedy Onassis (JKO) School in 2015 and joined ABT Studio Company in September 2017.  Clerico became an apprentice with the main Company in 2018.

Jarod Curley, from Bethesda, Maryland, studied at the Frederick School of Classical Ballet.  He later trained at the John Cranko School and joined ABT Studio Company in September 2016.  He joined the main Company as an apprentice in 2018.

Michael de la Nuez was born in Lexington, Kentucky and trained at De La Dance Center in Cincinnati, Ohio. He joined ABT Studio Company in February 2018 and became an apprentice in December 2018.

Léa Fleytoux grew up in Paris, France and trained at the Conservatory National Superior of Music and Dance of Paris before joining the ABT JKO School in 2016.  She became a member of ABT Studio Company in January 2017 and an apprentice with the main Company in 2018.

Abbey Marrison was born in Markham, Ontario, Canada and studied at the Karpov Ballet Academy.  She joined the ABT JKO School in September 2016 and joined ABT Studio Company the following year.  Marrison became an apprentice with the main Company in 2018.

Ingrid Thoms began her training at the Kintz Mejia Academy of Ballet in her hometown of McLean, Virginia.  She continued her training at the Harid Conservatory in Boca Raton, Florida until joining the ABT JKO School in 2016.  She became a member of ABT Studio Company in September 2017 and an apprentice the following year.

American Ballet Theatre welcomes the following ABT Studio Company alumni as apprentices in Fall of 2019:

Leah Baylin, from Boulder, Colorado, trained at the ABT JKO School and joined ABT Studio Company in January 2018.

Kanon Kimura was born in Tokyo, Japan and received training at the San Francisco Ballet School.  She joined ABT Studio Company in September 2018.

Melvin Lawovi studied at VM Ballet School in his hometown of Toulouse, France.  He became a member of ABT Studio Company in January 2018.

Duncan McIlwaine was born in Worcester, Vermont.  He studied at the ABT JKO School since age 13 and became a member of ABT Studio Company in January 2018.