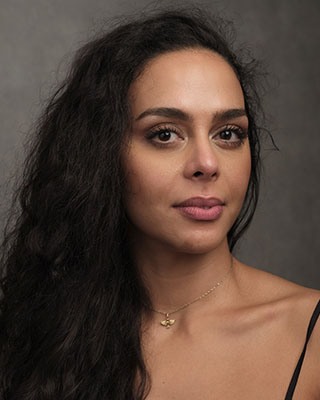 Born in Rio de Janeiro, Brazil, Isadora Loyola began her training at the age of eight at the National School of Dance with Maria Olenewa and, at 11, studied with Magda Aunon at Fort Lauderdale Ballet Classique.  At the age of 13, Loyola began training with Liudmila Polonskaya and that same year attended the Harid Conservatory and trained with Victoria Schneider, Olivier Pardina, and Svetlana Osiyeva.  Loyola has been featured in Harid’s productions as the Sugar Plum Fairy in The Nutcracker, Satanella in Carnival of Venice, and a soloist in The Flower Festival in Genzano.

Loyola was a National Training Scholar for four years at ABT’s Summer Intensive and joined ABT II (now ABT Studio Company) in 2007.  She joined American Ballet Theatre as an apprentice in January 2008 and became a member of the corps de ballet in January 2009.  Her repertoire with ABT includes Leto in Apollo, the Aya and Lead D’Jampe in La Bayadère, Lead Pirate Woman in Le Corsaire, Lead Gypsy in Don Quixote, Bathilde in Giselle, the Spanish Dance and one of the Nutcracker’s Sisters in Alexei Ratmansky’s The Nutcracker, Spanish Dance in Swan Lake, roles in Bach Partita, Company B, Drink to Me Only With Thine Eyes and Raymonda Divertissements. She created the White Cat in Ratmansky’s The Sleeping Beauty and a featured role in New American Romance.

ABT is grateful to Barbara Scher for supporting the Dancer Fund in honor of Isadora Loyola.