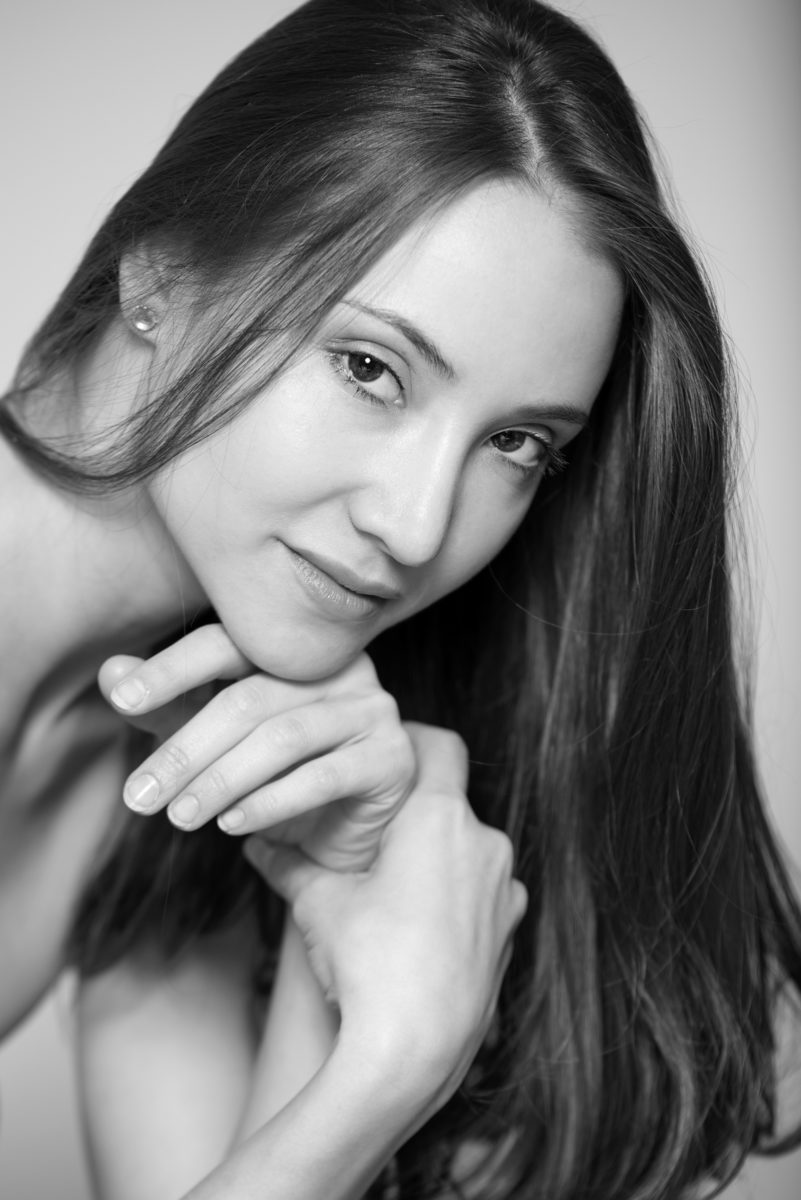 Christine Shevchenko was born in Odessa, Ukraine where she was chosen to train in rhythmic gymnastics and ballet at an Olympic School.  At the age of eight, she moved to the United States and trained for nine years at Pennsylvania Ballet’s Rock School.  Shevchenko danced the children’s lead in Pennsylvania Ballet’s The Nutcracker for three years, and was featured in the NBC special Degas and the Dance. In 2002 she was invited to perform with International Ballet Theatre Company’s “Stars of Kirov, Bolshoi and Ukrainian Ballet” in Annapolis, Maryland.  In 2003, Shevchenko became the youngest recipient of the Princess Grace Award.  Other awards include the Bronze Medal in the USA International Ballet Competition in Jackson, Mississippi, 2005 Gold Medal and Title of Laureate at the Moscow International Ballet Competition, the George Zoritch of  Ballet Russe Award for Talent Recognition, and the 2010 Margaret Moore Dance Award.  She danced leading and soloist roles from Don Quixote, The Sleeping Beauty, The Nutcracker, Harlequinade,The Flames of Paris, Grand Pas Classique, Le Corsaire, Paquita, La Bayadère, and Symphony in C.  She also performed various contemporary pieces by many choreographers, including Caprice #1, specially choreographed by Benjamin Millepied for a competition.

Shevchenko joined American Ballet Theatre Studio Company in August 2006 where she performed classical and contemporary pieces, including the pas de deux from August Bournonville’s Flower Festival at Genzano, Lilac Garden and Continuo by Anthony Tudor, and Eyes that Gently Touch by Kirk Peterson.  She joined American Ballet Theatre as an apprentice in December 2007 and the corps de ballet in June 2008.  She became a Soloist in 2014 and a Principal Dancer in September 2017.

Her repertoire with the Company includes Polyhymnia in Apollo, Gamzatti and a Shade in La Bayadère, Milkmaid in The Bright Stream, the Fairy Summer in Cinderella, Lead Mazurka/Czardas in Coppélia, Medora in Le Corsaire, Kitri, Mercedes, the Dryad Queen, and a flower girl in Don Quixote, the title role in Firebird, Lead Can-Can Dancer in Gaîté Parisienne, Giselle, Myrta, and Moyna in Giselle, Lead Persian Lady in The Golden Cockerel, Partisan Woman in The Green Table, Pierrette in Alexei Ratmansky’s Harlequinade, Blanche Ingram in Jane Eyre, An Episode in His Past in Jardin aux Lilas, Nanine in Lady of the Camellias, Lescaut’s Mistress in Manon, Clara, the Princess and one of The Nutcracker’s Sisters in Ratmansky’s The Nutcracker, Callirhoe in Of Love and Rage, Olga in On the Dnieper, Juliet in Romeo and Juliet, Fairy of Joy in The Sleeping Beauty, Lilac Fairy and Diamond Fairy in Ratmansky’s The Sleeping Beauty, Odette/Odile, the pas de trois, and Italian Princess in Swan Lake, Ceres and Diana in Sylvia, Princess Tea Flower and Mademoiselle Marianne Chartreuse in Whipped Cream, leading roles in The Brahms-Haydn Variations, Garden Blue, Her Notes, Mozartiana, Piano Concerto #1, Raymonda Divertissements, Seven Sonatas, Single Eye, Symphonie Concertante, Symphonic Variations, and Thirteen Diversions, and featured roles in Bach Partita, Birthday Offering, Company B, Deuce Coupe, Duets, In the Upper Room, and Sinfonietta.

She created Irene in A Gathering of Ghosts, leading roles in City of Women and Songs of Bukovina, and featured roles in AfterEffect, Dream within a Dream (deferred), Everything Doesn’t Happen at Once, Praedicere, and Private Light.

Christine Shevchenko in Songs of Bukovina.
Photo by Marty Sohl