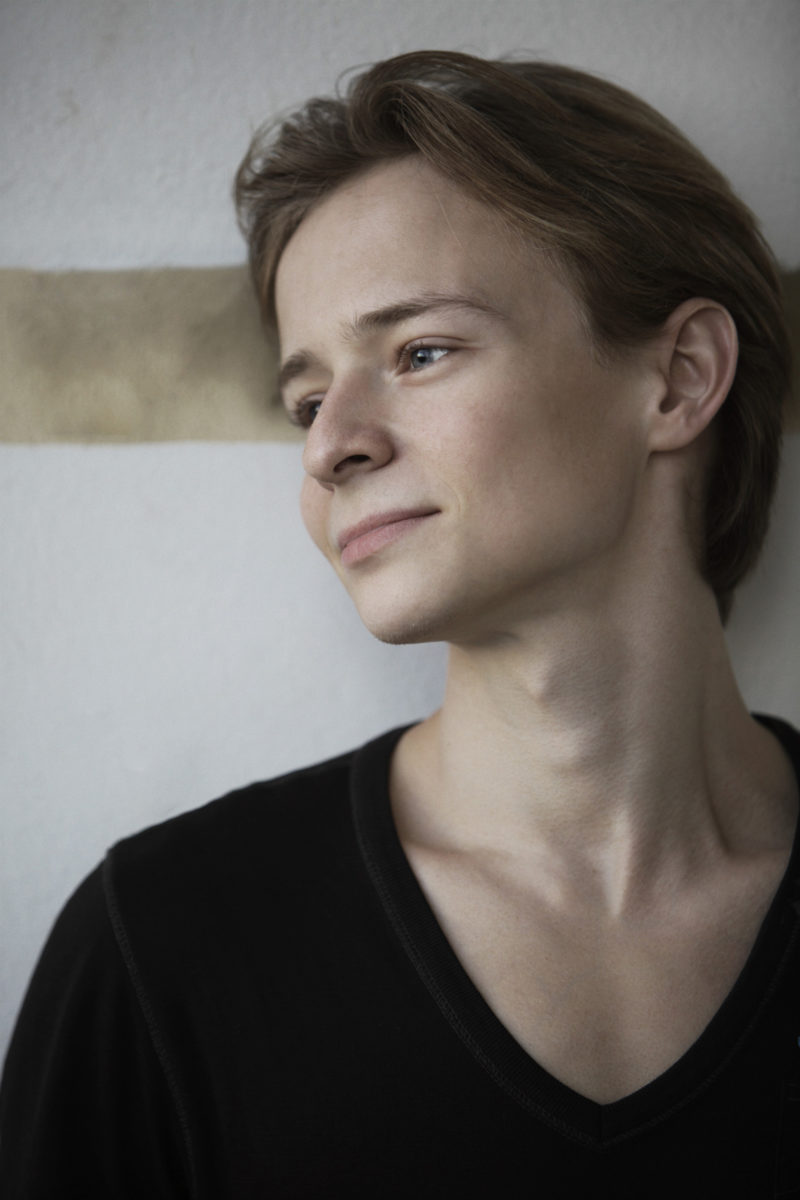 Daniil Simkin was born in Russia to a ballet family.  In 1990, the family left for the West and, after several international engagements, settled in Wiesbaden, Germany, where Simkin first appeared on the stage.  From the age of six he often appeared onstage, dancing alongside his father Dmitrij Simkin.

At ten, Simkin began his training under the direction of his mother, Olga Aleksandrova.  At 12, he began participating in ballet competitions and galas around the world and, at the same time, he finished his academic education.  He joined the ballet company of the Vienna State Opera in 2006 as a demi-soloist and danced many roles in the classical, neoclassical, and contemporary repertoire of the company.  In 2007, he danced his first principal role, Basilio in Don Quixote, as a guest with the Lithuanian National Opera.

Simkin joined American Ballet Theatre as a Soloist in October 2008 and was promoted to Principal Dancer in November 2012.  His repertoire with the Company includes the Bronze Idol in La Bayadère, Ballet Dancer in The Bright Stream, Franz in Coppélia, Ali and Lankendem in Le Corsaire, Basilio and the Lead Gypsy in Don Quixote, Puck in The Dream, the first sailor in Fancy Free, the Flames of Paris pas de deux, Albrecht and the peasant pas de deux in Giselle, Profiteer in The Green Table, Harlequin in Harlequinade, Lescaut in Manon, Kolia in A Month in the Country, Nutcracker-Prince in Alexei Ratmansky’s The Nutcracker, Lensky in Onegin, the Son in Prodigal Son, Romeo and Benvolio in Romeo and Juliet, Boy With Matted Hair in Shadowplay, Prince Désiré and the Bluebird in The Sleeping Beauty, the Rose in Le Spectre de la Rose, the pas de deux from Stars and Stripes, Prince Siegfried, Benno, and the pas de trois in Swan Lake, Gurn in La Sylphide, Eros and a Goat in Sylvia, Tchaikovsky Pas de Deux, leading roles in AFTERITE, Allegro Brillante, The Brahms-Haydn Variations, I Feel The Earth Move, Monotones I, Mozartiana, Piano Concerto #,1 and Symphony in C, and featured roles in Black Tuesday, Company B, Duets, In the Upper Room, The Leaves Are Fading, One of Three, and Sinfonietta.

He created the Chinese Dance in Ratmansky’s The Nutcracker, the Bluebird in Ratmansky’s The Sleeping Beauty, Ariel in The Tempest, The Boy in Whipped Cream, and roles in Everything Doesn’t Happen at Once, Serenade after Plato’s Symposium, and Troika.

Simkin joined Staatsballett Berlin as a principal dancer in September 2018. He has performed worldwide over the course of his professional career, including in Europe, North and South America, Asia, and the Middle East. Simkin is also a producer focused on productions that evolve classical dance onto digital platforms using technology, new approaches, and venues that actively engage the audience in immersive and interactive ways. He has established Studio Simkin to work in partnership with artistic talent and institutions. His works to date include INTENSIO presented by The Joyce Theater and Jacob’s Pillow in 2015, Falls the Shadow at the Guggenheim Museum in 2017, and Diorama with Staatsballett in 2020.

Daniil Simkin in Everything Doesn't Happen at Once.
Photo by Gene Schiavone

Daniil Simkin in The Dream.
Photo by Gene Schiavone