Stella Abrera, of South Pasadena, California, began her studies with Philip and Charles Fuller and Cynthia Young at Le Studio in Pasadena. She continued her studies with Lorna Diamond and Patricia Hoffman at the West Coast Ballet Theatre in San Diego. She also spent three years studying the Royal Academy of Dancing method with Joan and Monica Halliday at the Halliday Dance Centre in Sydney, Australia.

Abrera joined American Ballet Theatre as a member of the corps de ballet in 1996 and was appointed a Soloist in 2001.  Her repertoire with ABT includes the Girl in Afternoon of a Faun, Terpsichore and Calliope in Apollo, Gamzatti and a Shade in La Bayadère, The Ballerina in The Bright Stream, Cinderella and Fairy Godmother in Frederick Ashton’s Cinderella, Moss and Cinderella in James Kudelka’s Cinderella, Aurora in Coppélia, Gulnare and an Odalisque in Le Corsaire, Chloe in Daphnis and Chloe, She Wore a Perfume in Dim Lustre, the woman in white in Diversion of Angels, Mercedes, the Driad Queen and a Flower Girl in Don Quixote, Helena in The Dream, the first passerby in Fancy Free, Lise in Las Fille mal gardée, the Maiden in Firebird, Giselle, Myrta and the peasant pas de deux in Giselle, Queen of Shemakahn in The Golden Cockerel, Pierrette in Harlequinade, Blanche Ingram in Jane Eyre, Manon in Lady of the Camellias, Lescaut’s Mistress in Manon, Katia in A Month in the Country, His Friend’s Wife in The Moor’s Pavane, the Sugar Plum Fairy and the Snow Queen in Kevin McKenzie’s The Nutcracker, Clara the Princess and one of The Nutcracker’s Sisters in Alexei Ratmansky’s The Nutcracker, Emilia in Othello, Tatiana in Onegin, the Ballerina in Petrouchka, Older Sister in Pillar of Fire, Henrietta in Raymonda, Juliet, Lady Capulet and a Harlot in Romeo and Juliet, The Spirit of the Corn in The Seasons, the Lilac Fairy, the Fairy of Valor and Princess Florine in The Sleeping Beauty, Princess Aurora, the Lilac Fairy and Princess Florine in Ratmansky’s The Sleeping Beauty, the pas de trois in Swan Lake, the violin in Symphonie Concertante, leading roles in Bach Partita, Ballet Imperial, Birthday Offering, The Brahms-Haydn Variations, C. to C. (Close to Chuck), Everything Doesn’t Happen at Once, Her Notes, Jabula, The Leaves Are Fading, Meadow, Monotones I, Souvenir d’un lieu cher, Les Sylphides, Symphonic Variations, Symphony #9, Symphony in C and Thirteen Diversions, and featured roles in Airs, Baker’s Dozen, Black Tuesday, Deuce Coupe, Dream within a Dream (deferred), Gong, In the Upper Room, Petite Mort, Sinfonietta, Within You Without You: A Tribute to George Harrison, Without Words and workwithinwork.

Abrera created the roles of His Memory and His Experiences in HereAfter, the Spanish Dance in Ratmansky’s The Nutcracker, the Fairy Violente (Temperament) in Alexei Ratmansky’s The Sleeping Beauty, His Mistress in Weren’t We Fools, Princess Tea Flower in Whipped Cream and roles in After You, Garden Blue, Pretty Good Year and Seven Sonatas.

Abrera received the Gold Medal at the Royal Academy of Dancing’s Adeline Genée Awards in London in 1995.

Abrera was appointed a Principal Dancer in August 2015.

ABT Classics as Ballet Classes

Stella Abrera in The Sleeping Beauty.
Photo by Gene Schiavone

Stella Abrera in The Nutcracker.
Photo by Rosalie O'Connor

Joined ABT as Apprentice January 1996 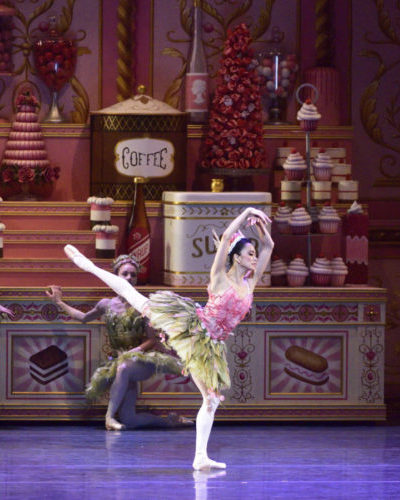